Who Will Be Number Three? 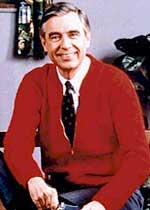 "Don't worry kids! Someday you'll be my neighbor again in the great beyond. Someday very soon..."

Last week, my late clone and I took a collaborative look at the birth and death of Dolly the sheep. Only a few days later, another international celebrity fell victim to the great cancer known as death. Well, technically he fell victim to the great cancer known as stomach cancer, but I was trying to be sort of poetic. You could cut me a little slack, you know. Jesus. I'm talking, of course, about the one and only Mr. Rogers. That's right, Fred Rogers has gone on to the kingdom of imagination in the sky (A.K.A., a wet grave). As a child who grew up on Mr. Rogers' friendly teachings, I can safely say that he had a huge impact on my childhood development. I can fondly remember almost every episode I ever watched. Well, that's not entirely true. I really don't remember anything other than Mr. Rogers' taking off his sweater at the start of every show. And to be perfectly honest, that always kind of creeped me out. I mean, the man simply could not start a show without looking right at you, singing, and taking off his clothes. Just thinking about it gives me the heebie jeebies. In any event, while Mr. Rogers may have retired in 2000, his death marks the end of an era for many young adults. This truly is a tragedy in the fullest sense of the word.

Tragedy, as we all know, always strikes in threes. The first was Dolly. Then, shortly after I wrote an article about Dolly, Mr. Rogers joined the ranks of the not-as-alive-as-they-used-to-be. I think it's pretty obvious what's going on here - I am the angel of death. One more celebrity must fall to fulfill my evil triad of doom. Let me tell you, there is no thrill quite like having your very own evil triad of doom. I sincerely recommend that you all go out and get one at some point in your lives. Now, it seems obvious to me that someone is going to die within the next week. Following the pattern, it will be a celebrity that everyone knows, yet no one really thinks about. Come on, before she died, when was the last time you sat around with your friends, had a few beers, and discussed the future genetic implications of Dolly the sheep? Exactly. In the interest of science and gambling, I have taken the liberty of compiling a short list of pseudo-celebrities who could conceivably croak during the next seven days. So, in memoriam of Mr. Rogers, it is my sober pleasure to bring you... 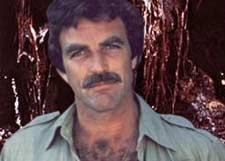 Mr. Selleck's beard took an unfortunate dive down his shirt.

Private investigator Thomas Sullivan Magnum fired his last round this week. Selleck was on working on a closed set, shooting the made-for-television movie "Three Men and a Vengeful Bitch," in which he was reprising his role as architect Peter Mitchell. According to sources within the production studio, Selleck had requested a ninth take of a particularly difficult scene in which he had to pull Mary (Robin Weisman) to safety after she fell over the edge of cliff on their camping trip. "I thought we had it after the sixth take," said director Emile Ardolino, "But Tom was always a perfectionist." While Selleck was in the middle of a poignant monologue about the sad degeneration of father-daughter relations during the late teenage years, a full-grown adult female grizzly bear apparently leapt onto the set and started mauling the 58 year old actor. "I can't imagine where a bear that size would come from," Ardolino commented. "We didn't have one on the set. There is a bear in the movie, but we just used stock footage from a National Geographic special." The bear finally stopped when it choked to death while trying to swallow one of Selleck's arms, but by that point, the actor was almost unbelievably dead. Selleck is survived by his two children. The bear is survived by six cubs. "Three Men and a Vengeful Bitch" airs on Monday on ABC. 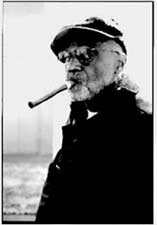 Face it, you don't know if this is a picture of him or not.

Actor, director, producer, writer, composer, and many other titles were once worn by Melvin Van Peebles. Now he is known only as "corpse." Van Peebles, the creative mind behind the 1971 smash hit "Sweet Sweetback's Baad Asssss Song" became one of hundreds of thousands of people to succumb to the deadly bubonic plague. The Black Death claims only a few lives each year in the United States, but until now, none of them were the stars of "Jaws: The Revenge," and were thus massively unimportant. Doctors theorize that Mr. Van Peebles probably first came into contact with the plague that once decimated the population of Europe when both the horrible disease and the actor/director appeared on a "Where Are They Now" special on the E! Network. Sources within the network issued a statement today, from which the following was taken: "In retrospect, it was probably a bad idea to make Melvin and the bubonic plague share a dressing room. The plague's agent was very upset with us over that at the time, but space was limited. It was also probably not a good idea to send the bubonic plague a basket of flea-infested rats in lieu of the traditional basket of fruit. That was actually Jules Asner's idea. She thought it would be funny and we... well, we couldn't resist. She does things to us, you know?" Van Peebles is survived by his son Mario Van Peebles, if you can call that surviving. I mean, the man was Solo in "Solo." Come on. 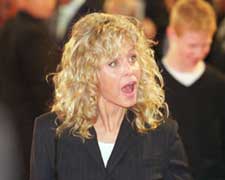 The redheaded boy in the background is visibly shaken by Ms. Fawcett's advances earlier.

Another one of Charlie's original Angels has gone to fiery Hell, where all scantily clad temptresses are roasted together in the boiling juices of their own silicone. That is to say, Farrah Fawcett is dead today. The actress had grown despondent in recent years, the people who are paid to be her friends told the press this afternoon. Once a respected member of the dramatic community, Ms. Fawcett was apparently depressed over the fact that the vast majority of the work she has done in the last decade has been titled in the pattern, "Something Something: The Someone Someone Story." Unable to convince the public that her fifty-six year old carcass was still sexually desirable through even the most humiliating exploitative videos, Fawcett retreated to her Beverly Hills home, where drinking became her closest companion. "It's no surprise that Farrah started drinking so heavily," suck-up Daniel Grueber stated. "Unlike James Orr, Farrah's liquor bottles never hit her. Except for that one time..." Flooded with alcohol, Farrah apparently flew into a rage early this morning over the fact that an obscene phone call had hung up on her. With her body temperature so elevated, the alcohol ignited and Fawcett exploded. Ironically, this is the first time Ms. Fawcett has ever done anything entertaining, and there were no cameras in sight. She is survived by her son Redmond and by Anna Nicole Smith, ending many a bet over who would die first. 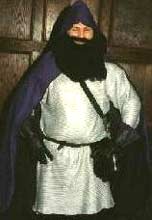 It'll be tough around here without him, but... well, no it won't.

Only a few short weeks after he started writing for the influential and controversial website somethingawful.com, Reid Paskiewicz, or "Frolixo," as he was known to the internet community, is dead. While the specific cause of death is as of yet unknown, the police on the scene reported that it looked like a case of auto-erotic asphyxiation. Paskiewicz was found in the basement of his mother's suburban home where he had apparently hung himself with a makeshift noose made from State Og's new Super Strength Neverbreaking Twine. A chair was found on its side nearby. Paskiewicz's pants were in an awkward heap beneath his dangling feet, and his genitals were wrapped in electrical tape. The basement floor was completely covered in Photoshoped pictures of fellow Something Awful employee Ben "Greasnin" Platt's head on a chipmunk's body, according to the police. "Reid never stopped talking about that Greasnin fellow," neighbor Cynthia Tatobalongo said. Paskiewicz's unhealthy obsession with Platt was also evidenced by a small shrine in the corner of his bedroom. "He set himself up for this sort of thing," police investigator Charlie Duff commented. "Wherever he went, he had pictures of Platt's head on a chipmunk's body staring at him. It's a tragedy, sure. Those damn furries never learn."

I made that face once. I won't tell you why, but I was walking funny for a week.

He survived his battle with Multiple Sclerosis, he survived his own fiery suicide attempt in the early 80's, but one thing comedy legend Richard Pryor could not survive was a leisurely jog. While jogging outside his L.A. home in a bid to get back in shape for his upcoming HBO special, "I'm Still Funnier Than Any of You Motherfuckers," Pryor was struck by an oncoming bus full of Colonel Sanders impersonators. The bus was on its way to the People Who Don't Call For Impersonators convention, ironically being held at the Honky Tonk Hall of Fame in Compton. Pryor, who was known for using foul language and racial humor and yet still being acceptable to white people, was the first recipient of the Mark Twain Prize back in 1999. Mr. Pryor's tailored jogging suit apparently caught the eye of Gus Sammerpail, the bus driver, who swerved to hit the comedian. "It just didn't seem natural, a black man wearing clothes like that. And running so fast, like he was, I figured he was trying to get away from something," Sammerpail said. The police pulled the bus over for being smeared with blood, and Sammerpail immediately recounted the entire incident. Charges are not being pressed, however. "It was an honest mistake," Police Captain Barney Johnston told the press. "I probably would have done the same thing in that situation." Reverend Jesse Jackson has declared Pryor's death to be a racial hate crime. "Ladies and gentlemen, call me a liar / If racism isn't what killed Richard Pryor," Jackson quipped. Pryor is survived by his seven children, his wife, and his other four ex-wives.

There you have it - my predictions for the next week. Be sure to watch your local news program for the very latest in celebrity deaths. Remember, if I'm right, then one of the people you just read about will be the next to step up to the plate and die. If I'm wrong, though, and all five survive the week, then death will still be lurking for its next semi-famous victim, which is bad news for the likes of Jordan Knight and Neil Patrick Harris. Keep your eyes peeled!