This bi-week, I kind of reviewed Exteel: some game about robots in an anime world of gayness. Not to say gay people are bad or anything (THEY ARE THE DEVIL) but anime robots are the dumbest thing ever imagined by man. If robots ever look like this in the future I am glad that I will be dead long before some dolt tries to make a full scale gundam. 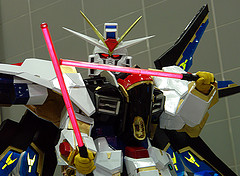 Oh hey its a guy dressed up as a robot.Lets be honest; you and I have much better things to do. You have other superiorly written articles to read and I need to run over hookers in Grand Theft Auto 4. I can say that I spent an extensive amount of time tediously playing Exteel in any attempt to write a stunning and powerful review. However, if you have read my articles in the past (god help you), you know that this isn't even close to the truth.

Before you pitch a fit that I spent more time in Liberty City than I did in whatever stupid world that has anime robots, I did manage to install the game and play it for a few minutes! Grand Theft Auto wasn't the only reason I tried my best not to play Exteel; I hate anime robots . Transformers is pushing it but when you start talking about that Gundam crap then you have gone too far. I just can't see the appeal of robots with light sabers shooting at each other but then again, I can't see the appeal of jerking off to cartoons either.

Exteel goes along with the "our game is free but if you want anything you have to pay for it" kind of billing plan which I honestly don't understand. What schmuck is maxing out his credit cards to paint their robot a different shade of blue? I know that you are essentially paying for nothing when you subscribe to a game like Everquest but at least you are buying some kind of service that helps the servers stay (hopefully) lag free. On the other hand, Exteel sells mostly worthless in-game items and the servers are absolute shit. The money obviously does not go to the servers as even with a fairly low ping, Exteel slows to a crawl during peak hours. But hey, if I had a bunch of morons playing a game I made about anime robots (Krazy Anime Robot Adventure coming out May 18th, 2008), I sure as hell wouldn't put the money back into customer support.

Threads on the Exteel forums often derail into conspiracy theories.

Much like every single game I "review," Exteel had your stereotypical anime-loving fat nerd community. However, these creeps took a very bizarre pride in their pretend anime robot mech warriors. I can imagine the conversation that ensues as they stand around the water cooler section at the SuperCenter they work at, "Hey man my B-class ultrasound exploder bot has a new 700XL hyper beam! High five!" says one plump nerd to the other but only to receive, "Pfff. I will high five you when you are not a plebeian fool! My A-class Super-sound bomber bot has a new 720XL hyper beam."

A goon named antiloquax did nothing but troll the Exteel forums with the name of "iloverobots". His first thread started as an innocent robot fetishes (deleted after only a few pages) but his greatest achievement had to do with derailing a thread about "putting destroyable buildings in the game" into a giant 9/11 conspiracy. This brain-dead community ate it up and were soon arguing over which Jews controlling what planet caused the planes (the flew from Area 51) to collide with the explosives put in the towers by the government.