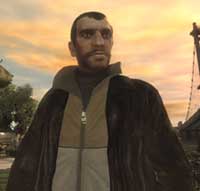 Phew! At least the main character isn't black this time. I just couldn't relate to CJ. As a white suburban kid who has never had to work for anything his entire life I can better relate to a ex-military guy from war-torn Eastern Europe!The other day MY GIRLFRIEND asked me, "What is it about Grand Theft Auto IV that makes so many people excited for it?" and I told her, "Well, it has a four at the end of the title."

While I could have told her about the Euphoria engine, the high definition graphics, and the numerous multiplayer modes, none of those things really matter. And unless that 13-year-old German kid's asteroid hits the Earth and ends humanity as we know it, this game will sell a bazillion copies no matter what the game is like.

Variety is already reporting that Grand Theft Auto IV will make enough money to fill the Grand Canyon all the way to the top. The U.S. Mint might as well move that whole operation to Rockstar Games studios in Scotland and put half the money they print directly into Dan Houser's wallet.

Since Grand Theft Auto IV is a hot topic at the moment and by writing about it we'll get more hits and ad revenue as people search for the latest information about the game on Google, in today's article we'll explore where the Grand Theft Auto series has been, where it's going, and examine some of the fierce competition it faces from the clones it has spawned.

I'm a 25-year-old man-child who can't think of anything else but some stupid new game that's coming out. Time to talk GTA.

When I Was Seventeen...

I was a sophomore in high school when Grand Theft Auto III came out. I had just gotten my learner's permit and because my grandma was going senile and couldn't operate her motor vehicle without slamming it into parked cars and puppies, I was suckered into driving her everywhere she needed to go because I never developed a will of my own.

While running around the store trying to hunt down her hemorrhoid cream I came across GTA3. I said, "Gamma, buy me 'dis." She did and two weeks later she died. I'm not entirely convinced the two events aren't unrelated.

Grand Theft Auto III wasn't a particularly good game. I became bored pretty quickly and went online to solicit opinions from others. To my surprise I learned that it was a sleeper hit and everybody was raving about its open-world gameplay. Never one to shy away from jumping on a bandwagon I started posting on various message boards about how much a brilliant game it was.