The Necronomicon as Imagined By Other Authors 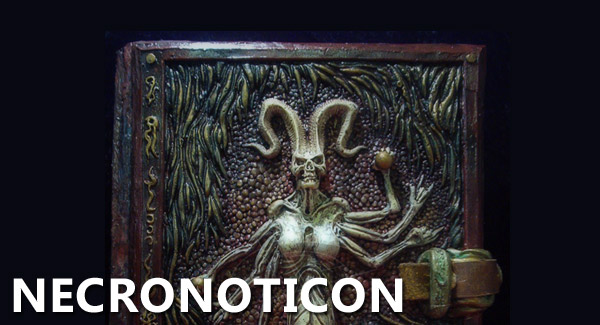 Conceived of by HP Lovecraft in his short story "The Hound," the fictional Necronomicon was a rare and sinister text written by the so-called "Mad Arab" Abdul Alhazred. Sometimes described as being bound in human flesh, the Necronomicon contains the means to communicate with and summon extremely powerful entities from beyond time and space.

Dr. Michaud passed through the door and into a room of hard light and meticulously arranged angles. The room was devised as an instrument of revealing, as much a tool as microscope or speculum. Lana sat upon the edge of the table of polished steel, her legs folded like the closed limbs of a grasshopper perched atop a bending thread of grass. Her narrow, precise face, complimented by sunglasses, reminded the doctor of that same creature.

The pristine angles of the table's surface, disturbed already by Lana's asymmetrical position, were further disrupted by the askew presence of a considerably unwholesome book. The fleshy cover dissolved the geometry, defying every vertex, a violence perpetrated against order.

The Necronomicon. A book penned by a mad man. Written for fools. A tumescent meat-thing projecting forth from ideas. A drooling tongue thrust into the caverns of mortal construction. Words designed to mock death at the black hearth of science.

There was a click. Nina spread her legs and pulled Dr. Michaud inside of her with a cry.

The Arab opened his hands. The book landed upon the table. It weighed upon me as a curse. I fled Morocco for New England. 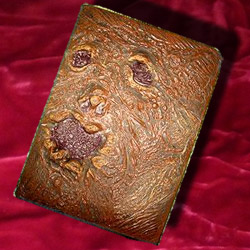 Glen turned to Isaac as the elderly black man stepped out of the timeworn Chevy. There was a tune playing on the radio. That tune from the 1950s that always meant something important was about to happen. Isaac had something all wrapped up in newspaper. Glen could still make out the score from an old baseball game and that story about Mrs. Rickey's accident.

"Found this book when I was cleaning out the hospital," said Isaac. "They'll tell you not to judge a book by its cover. But in some cases the cover can tell you a story all its own."

The newspaper crinkled and Isaac unwrapped a big book. NECRONOMICON was printed on the cover, only it wasn't printed, it was raised like blisters on a pale grey leather. The more Glen looked at that leather the more he could see details that made him feel a little bit sick deep down. Little freckles and tiny scars, like the way papop's arm used to look when he would carry Glen and put him in the car.

Neil rose from the table and stood up as a military man. A defiant look had taken residence upon his face. He pointed at the large book Captain Vincent held in his hand.

"What is that book there?" asked Neil, for the book's properties were strange and disturbing in simultaneous.

"This?" Captain Vincent hefted the book. "It is a dire volume I will not open to you. They call it Necronomicon and with it I might better understand some very dangerous beasts."

"Yes, the very same," chortled Vincent. "Spiders. And quite large at that."

With a tugging at a velvet cloth, Vincent revealed a glass box containing the largest spider Neil had ever before seen. Lorna fainted straight away. The spider was black and with an evil wave to its legs. It was nearly as large as a ham.

"Like Harry Potter?" I say coyly, biting my lip. Holy shit. He looks so hot in his purple hat. His smile is slowly spreading across his face. It is a cruel smile. Like a tiger's.

"I believe you will find Harry Potter and I have more than one thing in common," he says running his fingers over my head and to the book that is sitting on his table. So fucking hot. It's a grey book with neat black clasps and a silver lock on the front. Engraved in gold it says EVIL SPELLS. He turns to me suddenly and he has a crueler smile than before. "You will soon understand the meaning of the Necronomicon's power." 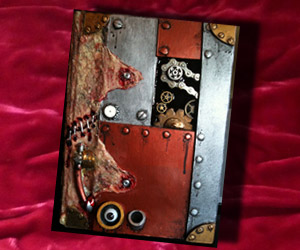 Kato sheathed his prismatic nano-katana and lifted the book from the engraved drawer. It was heavier than he expected, the face of it a mass of cogs and leering gargoyle faces stretching from the cured human skin. He dropped the book into his courier bag. Gwynyss would want to be the first to open its blood-locks. Without a sound, he abseiled from the shadow library's cantilevered window and disappeared into the undercity.

Benjamin Franklin cursed volubly at the pain. He squeezed his fingertip with his thumb and the needle prick at last produced a fat droplet of crimson. It rolled down the back of his nail and, with great care, he deposited it into the groove of the lock. The Necronomicon began to open, gradually, like a harbor coming to life upon the return of the trawlers.

It was exactly the process Benjamin Franklin had first predicted to Teodor, the historical homosexual, who was also an expert at meteorology and arbitrage. Benjamin had often discussed the predictive calculus of trade and, as his blood filtered through the book's arcane mechanisms, he wondered if the centuries of waiting undiscovered had imbued the Necronomicon with some value that might be analyzed using math theory.

I took the Necronomicon away and put it on the shelf and quickly zipped up my pants. Punchy was rubbing some oil on some ancient texts and he threw his rag down and came over to me. "Travis, why is it every time I come in the dream library I catch you pulling up your pants?" I gagged and boggled. "Hahahahaha no reason," I said. "Yeah, I bet there's a reason," laughed Punchy. "There has got to be a pussy hole on that book." I felt my butt go tight at the thought that my book's pussy might be found out.