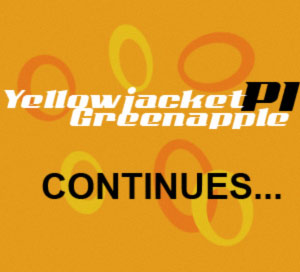 Footsteps thunder on marble floor. A phalanx of men in red-and-white striped shirts stride purposefully towards the beautiful woman at the librarian's desk. At the tip of the phalanx is THE OPTIMIST, nemesis to Yellowjacket Greenapple.

"Can I help you?" The librarian smiles.

"Most certainly." The Optimist takes a small cage from his jacket and places it on her desk.

"What's this?" The librarian is curious.

"Feel it." He opens the cage with a flourish and a snail slowly begins to glide out onto her desk.

The woman is entranced by the snail. The spiral of its shell is mesmerizing. She touches its head and it recoils. She smiles and slumps in her chair. The thugs drag her away.

"Quickly now, he will be here at any moment."

An angry buzz of trumpets like a wasp and a crack of thunder. Yellowjacket Greenapple throws open both doors of the library and takes in his surroundings. A confusing jumble of signs point the way to various departments. A red-and-white clown statue indicates the main information desk. It giggles as Yellowjacket walks past.

A man is seated at the desk. He regards Yellowjacket with disdain. 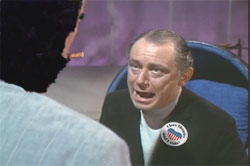 "Books are free, information is costly." The man taps a "no smoking" sign.

Yellowjacket turns, as if to leave, and then spins back around to lunge at the man. A flash of white. Yellowjacket is walking away from the information desk. The man is bound to his chair, spinning slowly, his mouth taped and his face completely red with blood.

Yellowjacket walks beneath a sign that reads "AV ROOM" with an arrow pointing straight up. He ascends a spiral staircase and enters a darkened room. A single light illuminates the same man he just left bloodied in the chair, only this man seems perfectly intact.

"Books." Yellowjacket produces the list given to him by The Dauphin.

"Interesting." The man nods. "Sit down."

"We have millions." The man steps forward. "Enhanced books. A heightened experience."

"Microfilm?" Yellowjacket sits casually in the indicated chair. A screen behind him shows the silhouette of his face.

"Something like that." The man produces a remote control. "This may sting a bit."

"This is commerce, Mr. Greenapple."

"You're in a library." The man taps his temple. "Information."

"Yes, it is commerce. What will you trade for these books?"

"Very good, but now is fleeting, Mr. Greenapple. Transitory. We want what was. The past. History. It's indelible. It is information." 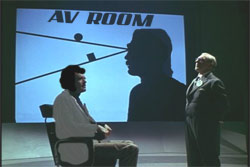 Greenapple nods. There is an accelerating clicking like a film reel starting. Circles begin to move along the black lines and into and away from the silhouette on the screen. Greenapple grinds his teeth.

Flash of white. Greenapple is a child, smartly dressed. He turns a turtle onto its back.

"More." The man's voice is distant.

A flash of white. Greenapple is a child, smartly dressed. He holds his hand over a candle's flame, crying silently.

A flash of white. Greenapple watches an elderly woman approach the top of a staircase. He darts from the shadows and shoves her, the woman cries out and falls down the steps.

A flash of white. An adult Yellowjacket stands on a yacht. Ocean spray patters on his face. The world seems to vibrate around him. He stands in a shower. Blood spirals down the drain. A woman's hand is visible.

Water beads on a lifeless arm. The shower is so terribly red.

"A pity." The man says. "You had only three books left to read."

Yellowjacket trembles and looks down at the list in his hand.

Wee Shaker and the Mighty Meringue
The Heuristic Scribe
The Turgidest Klansman
Courage Mountain
Beaver Hunt
Fauntleroy's Taint
William Shakespeare's "Grunt"
452439: A Novelization
Azimuth 6: The Fight for Blood Neutrality
Windows and Worms
The Bleeding Clock
In Seven of Eight
Scooty the Poppet
A Practitioner's Guide to Daemonic Entities
Murder Car
The Dog that Came Back
Her Immaculate Pleasure
The Incalculist

"Where are the others?"

"I can give them to you." The man's smile is cruel.

Yellowjacket lunges at him.

A flash of white. Bare feet on white linoleum floor, tracking blood. A burly man in a white uniform. A pair of scissors in his throat.

A flash of white. 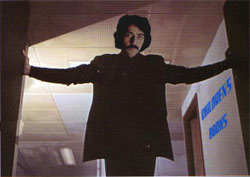 Yellowjacket Greenapple throws open the double doors of the Children's Department. He stands, waiting for his eyes to adjust. He lights a fresh cigarillo and enters. A larger version of the red-and-white clown statue looms out of the darkness. It giggles.

"The world is wrong." He remarks and puts the cigarillo out in the clown's stone eye. It giggles.

Yellowjacket slowly removes his silk necktie and wraps it around his hand.

Trumpets blare and the harpsichord plays. Explosive snares rattle in time to Yellowjacket punching and kicking the clown. His face is totally without expression, but with a palpable fury he unleashes impossible violence on the stone statue. Chunks of stone fall away from his hammer-like blows. Blood soaks through his necktie. The clown begins sobbing, the sound rising gradually above the music as Yellowjacket methodically takes the statue apart with his fists.END MONTAGE

A final scream. The clown crumbles to nothing. From the rubble Yellowjacket plucks a small black wine bottle. He turns the bottle to read the label. "The Dog That Came Back." He takes the cork from the bottle with his teeth and upends it over his mouth. Dark port runs out both sides of his mouth as he gulps down the wine. He finishes the bottle and throws it into the darkness.

Powerful lights suddenly illuminate the children's department. It is a huge amphitheater and from the stands comes a cacophony of wild applause. Hundreds of burly men in red-and-white shirts clap, cheer, and wave pennants with stylized Yellowjacket Greenapple logos on them. Yellowjacket calmly reties his necktie and then bows before leaving. A sign points to ROMANCE.

Yellowjacket opens a large sliding door made from corrugated illuminum. A house built within an enormous zeppelin hangar. White picket fence and all. Yellowjacket opens the gate and enters the house. The beautiful librarian from the front desk sits on a sofa, her eyes are fearful, her mouth is taped. Yellowjacket leans forward and pulls the tape off. She wets her lips. 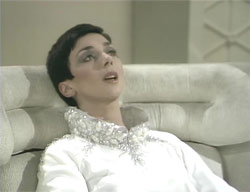 "A great book." The woman smiles. Her hands are still bound behind her back.

"Sometimes." The woman flutters her eyelashes. "When you'd like."

"Take it from me." An invitation.

Slow motion. Yellowjacket Greenapple takes his cigarillo case out. He taps it. The woman bites her lip. Yellowjacket slides out a single cigarillo. He places it to his lips. She arches her back and turns her head against her shoulder. Flame bursts from Yellowjacket's silver lighter and sparks an ember on the end of the cigarillo. The woman's eyes roll back into her head. The ember glows as he inhales. She writhes with ecstasy on the sofa. His fingers pluck the cigarillo from his lips. The woman and sofa recede, pulling away as if on wheels. The house darkens. End of slow motion.

Yellowjacket Greenapple smiles. He takes one last drag on the cigarillo and then drops it at his feet. He walks away. 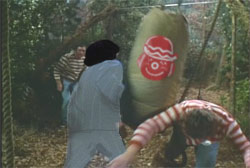 Distorted screams. A snail leaves a glistening trail across white padding. A growing buzz of trumpets. A hand seems to smash it flat. A flash of white.

A sign reads DANGER: KNOWLEDGE AHEAD. Yellowjacket slashes through jungle foliage with a machete. A heavy green sack swings out on a rope to slam into Yellowjacket. The horrible clown's face is emblazoned on the front. Yellowjacket side-steps the trap and hacks the sack open. Red sand spills out. An echoing giggle. Burly men in red-and-white striped shirts emerge from concealment and attack Yellowjacket. A desperate karate battle erupts. Yellowjacket dodges and weaves. He unleashes brutal attacks and ancient Eastern kung-fu maneuvers on his assailants. More than a dozen are knocked unconscious.

Yellowjacket finally dispatches the last of his attackers. He hacks through the remainder of the jungle foliage and reaches a modern white fire door set into crumbling Aztec ruins. He straighten his hair, his tie, his suit. He smooths out the wrinkles. He opens the door.

A flash of white. Yellowjacket Greenapple is alone in a large room. On a pedestal is a single blue book. The Incalculist. By Zipper Johnson. He opens the book. He flips through the pages. Page after page is blank. He flips faster. On the very last page is printed a single word.

Trumpets blare loudly. A harpsichord picks out the notes of the theme song. Yellowjacket Greenapple slams the book shut with a puff of dust and a whip-crack sound. He smiles.CREDITS MONTAGE 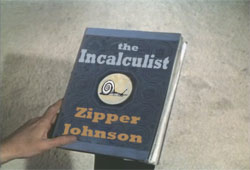 Yellowjacket arrives at the secret warehouse where The Dauphin is hidden. THE WORLD IS WRONG burns green on The Dauphin's screen. Yellowjacket Greenapple, pale, shaven-headed, without a mustache. He regards you with sunken eyes. He mouths The Dauphin's words.