The Top 5 Greatest Lines In History

1. The Greatest Line In History: To Get To The Other Side Division 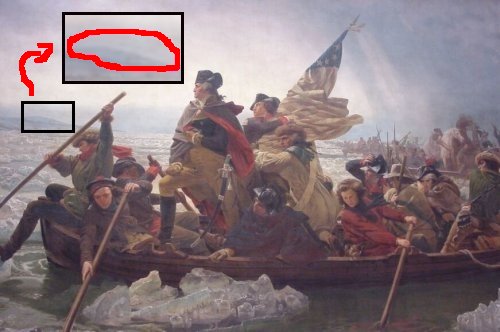 Like most of history's great lines, this line is not only underappreciated, but hardly noticed. With all those people in the foreground wasting time by posing and making command decisions in times of war and fighting for the freedom of a newborn country, what chance does a faint line off in the distance have for recognition? But that small curve is performing a brave and vital duty: Being The Other Side Of The River (In Times Of War).

Imagine for a moment that you are leading an army of scrappy but noble rebels over a frozen and choppy river. How embarrassing would it be to get to the other side and find that there just was no other side? You'd have to turn to that guy behind you who hasn't quite seen what's going on yet because the flag he's holding has kind of wrapped around his face in the wind and you'd say "We have a problem." and he'd say "What kind of problem?" and when you'd explain no one would believe you, they'd just keep rowing forward and then they'd get there and realize you were right and then glare at you because it was your idea to cross this damn river in the first place, "Why couldn't we just wait for the British to come over here where we'd be warm and rested?" they had asked and you had made some bullshit up but the real reason was you wanted to have a moment in history that would define you and because you'd look really cool up there leading people across a river but now it’s all blown up in your face because the river couldn't be bothered to have a fucking other side just this once and it's so humiliating that you give up your position as general and the British win the war and then later on the Nazis take over because the British are too busy wasting time doing things like "joining the war before it becomes almost unmanageable" and "not putting random citizens in prison camps because they're Asian" and then when the aliens invade no one is prepared because the Nazis are actually in league with the aliens and so the world ends.

And that's how the world was saved by that line. 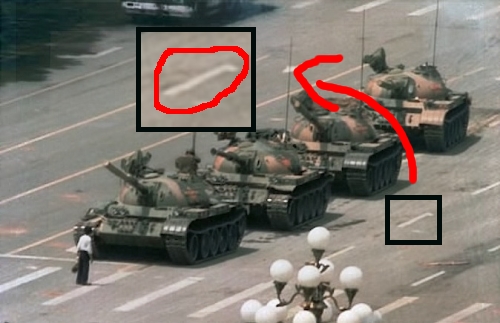 When discussing classic stand-offs, it's easy to get lost in the immediate conflict of whatever versus whatever, forgetting entirely the problem of making sure both whatevers are in the right place at the right time. One missing half, and the entire stand-off is thrown out of balance. That's where this important line comes into the picture.

Without this line, and countless others like it, the menacing tanks would have had no idea which direction they were supposed to be ominously rolling towards. Instead of facing down against the oppressed citizen, the tanks might well have ended up in a bitter confrontation with, say, the light post, or a mailbox. Their symbolism of mechanical authority would have been muddled when one of them accidentally went up on the curb and all the others rear-ended each other like a line of camouflage-painted dominoes with guns. Thanks to this line, the tanks and that guy with the bag were able to have their fateful standoff that ended when he got run over or just walked off and let the tanks go, I'm really not sure which. 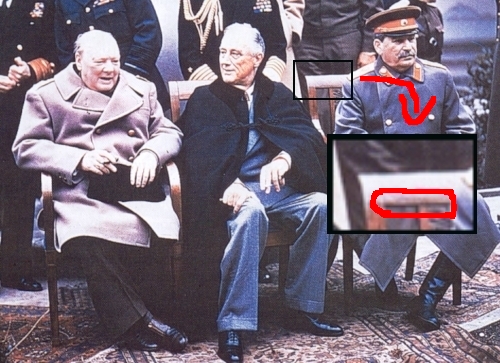 The world was under siege. The leaders of three great forces met. One stalwart line provided firm back support to one of those leaders.

Of course, if that line wasn't there and Stalin had fallen backwards he might have hit his head and died, or at least become a vegetable for the rest of his life. Then, while the war effort would have suffered a set-back, millions of Russians wouldn't have been slaughtered in violent purges and the world wouldn't have endured the paranoia and chaos of the cold war. If this goddamn, worthless line hadn't been there, we could have had a small chance of peace after war. If that disgusting war crime of a line hadn't been lurking around in its filthy position as an accessory to Stalin sitting down, the entire world would have been a better place.

I only hope you can live with yourself, little line.

4. The Greatest Line In History: Ha Ha Napoleon Was Really Short Wasn’t He? 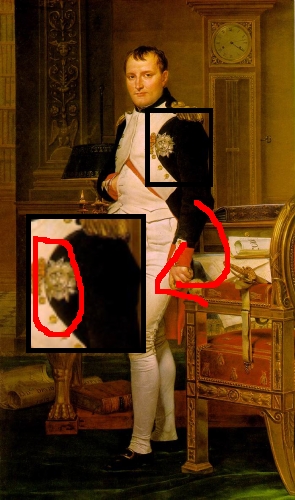 Look at that grandfather clock in the background. It’s just towering over him like "Hey! You there! Short guy!" Man, I bet if you put Napoleon next to a short person he’d be shorter. He probably looked in the mirror every day and cried because he was so short that he couldn’t see the mirror and that's why he made them paint his picture. But then he was too short to really see the picture from anything but a weird angle so he went ahead and invaded half of Europe. Anyway, I guess that line is pretty good. Good job, line.

5. The Greatest Lime In History 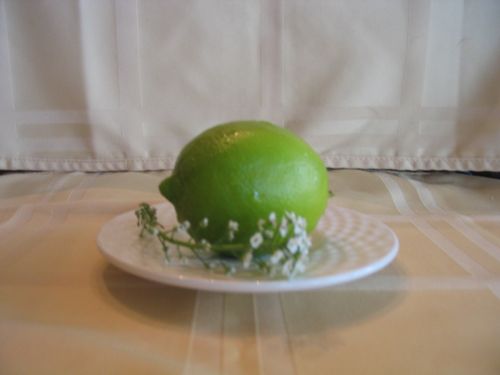 Click here for a HUGE AMAZING contest. This is not a joke, shipping is free, please click here!!!