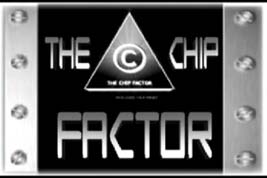 Note that although the title screen says "The Chip Factor," the actual title of this movie is just "Chip Factor." What does that tell you?Overview: A desperate research company tests its performance-enhancing microchips on helpless victims, despite having an overabundance of willing volunteers.

The Case For: Watching this movie has not been proven to cause cancer.

The Case Against: Let's put it this way: the best thing I could think of to say in its defense was that it hasn't been proven to cause cancer. And honestly, I don't have the hard data on that.

After a month and a half of dealing with short films, I decided to change things up by tackling Chip Factor, the longest movie I have ever reviewed. Okay, that's not completely true. I didn't realize that this movie was two hours and fifteen minutes long until I sat down to watch it. But that realization actually set the tone for the entire Chip Factor experience - you can't prepare yourself for it; it just happens to you.

I mention the length of this picture not simply so you will appreciate the length of my suffering on your behalf, but because timing is a curious thing in Chip Factor. For instance, take the Netflix plot summary:

Five participants in a 72-hour research study agree to be implanted with microchips that boost tenfold their intellectual and physical capabilities. But once the side effects strike, it's a battle against time for these unwitting guinea pigs. The "Power Chip" and the "Smart Chip" are formidable nemeses in this sci-fi thriller. 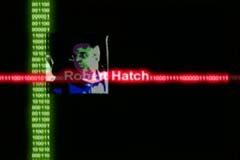 Ooh, science fictiony!So there's our plot for this evening, or so we are led to believe. The truth is that nothing in that description even begins to happen until well over an hour into the movie. Once again, the major plot of this two hour and fifteen minute movie does not even begin for over an hour. That's like if the entire first half of The Matrix was nothing but Keanu Reeves sleeping late and not going to clubs. Also, the five people involved in the study do not experience any side effects. Only effects. Saying they experience side effects would be like saying that a side effect of Tylenol is that it cures headaches. And they are not unwitting guinea pigs. There are plenty of unwitting guinea pigs in this movie, but none of them are in the 72-hour trial. The people in the trial are, in fact, witting. I guess I can agree with the "battle against time" part, but just barely. Finally, having watched this movie, I can say for sure that I have absolutely no idea what they mean by "The 'Power Chip' and the 'Smart Chip' are formidable nemeses." Nemeses for what? Each other? Because if so, then that's just a giant load. Those two chips never come into any sort of conflict with one another.

So, as you can see, the Netflix summary is crammed full of lies. Who is to blame for this? The fine people at Netflix? No, we have to assume that none of them have actually seen this movie. Anyone who had to watch this movie as part of their job would immediately quit. Except for me, of course. I stick with it because I love you. No, the real liar here is writer/director/editor Michael K. Harris. This man is a consummate liar. For instance, he also made the claim, both in the DVD description and in the opening credits that he himself edited, that this film stars Professor Griff. If your immediate response to that statement was to try to remember which class at Hogwarts was taught by Professor Griff, congratulations, you're white. Professor Griff is, of course, a member of hip hop supergroup Public Enemy. Professor Griff does not star in this movie. Professor Griff appears in one scene in this movie, and that scene is entirely without purpose. Like I said, Michael K. Harris is a great big liar.

Having firmly established that Michael K. Harris is not to be trusted under any circumstances (unless those circumstances happen to necessitate a guy who can make a crappy movie and then lie about it), we can proceed with the actual movie itself, knowing that deception will likely lurk around every corner and under every weakly attempted subplot. Even the opening credits are like getting hit in the face with a pie filled with putrescent hoodwinkery, as the names and faces of the cast members float past a steady stream of binary code, giving a high tech, computery feel. For the record, there are two computers in this movie. One seems just about ready to blow a circuit while trying to run a simplified version of "Math Blasters." The other operates a sophisticated tracking device, which seems impressive until you realize that it is only used to track objects as far away as the basement of the building in which the computer is located. Once again, Michael K. Harris is a remorseless liar. Even his name is a lie. The "K." makes him sound classy. He is not. 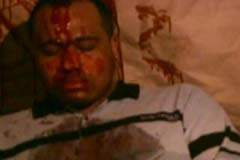 Let me tell you, watching this guy shake his jowls in slow motion is not something you want to see for yourself.We open on a poker game. Get it? Poker? Chips? Chip Factor? There's a lot going on here, folks. A hefty black gentleman wins a hand, rakes in his earnings, and then promptly suffers the sort of full system overload that black people are prone to. Specifically, he convulses violently and then his head explodes. A heavyset woman across the table calmly takes the money for herself. No one is the least bit phased by this turn of events. One person even comments that the splatter tastes good. No explanation is offered, but I'm guessing that some sort of chips are a factor. We are quickly whisked away to a new scene by way of Michael K. Harris's favorite effect, a wholly inappropriate lens flare. 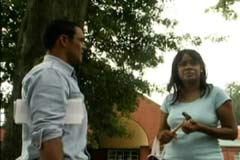 "Can you help me find my son?" "No, but I can help you stretch out this scene." "Good enough."When the blinding flash subsides, we see Janet Rivers, a thirty-something black woman, handing out fliers to passersby. Through an incredibly protracted conversation with a complete stranger, we learn that Janet's son Markus is missing. We also gain some valuable insight into Michael K. Harris's signature directorial moves. For starters, he likes his conversations long, slow, and repetitive. He also loves slow motion. He is all about the slow motion. Anytime anyone poses a question, he immediately plunges into slow motion while the other person formulates their response. This movie would be at least forty minutes shorter if he had taken out all of the completely useless slow-mo that plagues nearly every scene.

In a bar that is most definitely not Michael K. Harris's grandmother's living room, a white guy named Steve meets with an impatient black guy who has evidently lent Steve a large sum of money. Steve is some manner of scientist working on mysterious "chips" that will supposedly make him, his investors, and his company Bio-Soft all extremely wealthy when they hit the market, thanks to their ability to improve basic human intelligence or physical capabilities. Unfortunately, the chips are six months behind schedule, so Steve is primarily making a living by taking money from black people and then immediately pissing them off by trying to use their lingo, despite being an abrasively dorky white research scientist. We'll see more of this in a bit. First, Steve and his associate have to stand up from their seats, which in Michael K. Harris's twisted labyrinth of falsehoods is a cue to crank up the slow-mo. You read that right - it's a slow motion standing sequence. 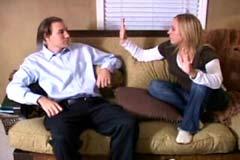 I hate John so, so much. Clara's okay.Now it's time for us to meet two of our participants in the 72-hour research study we've all heard so much about. First, there's Clara, a blonde girl in need of some cash who is more than happy to sign over three days of her life in exchange for $1800 and free meals. Then there's John, her boyfriend, who is so painfully retarded that I have to imagine that Clara would have been more than willing to sign up for the study just to get three days away from him. This is a guy who, upon hearing Clara's idea to score some quick cash, is baffled as to why she doesn't just steal it. We're talking about a man who, when his girlfriend tells him she's going away for three days and will call him when she gets back, quickly proclaims, "No girlfriend of mine is going to call me when they get back!" Clara and John provide the first introduction to the 72-hour study, but it bears mentioning that the actual study won't appear for another solid hour.

It's been forty-five seconds since the last use of slow-mo, so we now get to watch a bunch of kids slowly playing basketball for no reason. Steve crouches in some bushes nearby, and once the game is already over, he uses a blowgun to implant one of the kids with a "Smart Chip." That's right, his research methods involve shooting kids in the neck with a goddamn blowgun. He's either the worst scientist in the world or the best, I'm not sure which. It turns out that the kid who takes a dart in the neck is Markus Rivers, the missing son of Janet Rivers. This introduces another key aspect of Michael K. Harris's directorial style, namely, that he likes to take any sense of chronology or continuity and hump it until it is nothing more than a shattered, weeping husk of its former self. The opening scene at the poker game actually takes place near the end of the movie, chronologically speaking. The scene with Janet talking to strangers takes place a few days earlier. Everything that has happened since then has actually taken place a few days before that, in one protracted flashback. Up until this exact moment when we see Markus Rivers on the screen, there is absolutely no way to know that the events are happening out of order. Isn't that just ducky?