At a Glance: It always seems that every time a game comes out based on a movie or television show it sucks and you shouldn't be very surprised to find that Cool World follows this pattern of shitty film to game adaptations. Now that I think of it, the reverse seems to have the exact same outcome. What was the last video game movie you saw that actually surpassed average at best? Simply put, video games make shitty movies and movies make shitty video games. STOP IT!

Story: As mentioned before, Cool World's story basically mimics Ralph Bakshi's 1992 movie which starred none other than Brad Pitt... sort of (he's more of a supporting role). I can't say I ever saw the movie since when it came out I was only five and by the looks of this game, I am glad.

From what I read on Wikipedia the basic story has to do with escaping Cool World and making it back to Las Vegas while the main antagonist (who has a crush on you) tries to inhabit your body so she can enter the real world. The joke comes when the main character actually enters her body (WITH HIS COCK). Oh and for some reason she also wants to find some kind of "Golden Spike of Power" to destroy both worlds. What?

Again, I may be wrong but from the clips I saw it seemed that "Holli Would" hooks up with the main character and he ends up having sex with a cartoon (every goon's dream). I never saw the ending but it seems that they end up working together until she betrays him. In the game, however, they just kiss since sex in video games never goes over well and they wanted to avoid a Mature or Adults Only rating. You know, because no one other than some stupid kid would want to play this game. Either way, Holli betrays his sorry ass and he has to stop her.

On another note, why would anyone make a game based on a movie that peopled hated? I can understand making some shitty game for a movie everyone liked just to try and cash in a bit more. Perhaps this had to do with the game (for SNES) and movie coming out in 1992 so it probably had to do with advertising but whatever, they both sucked and proved that just uniqueness (other than ripping off Roger Rabbit) doesn't equal greatness. 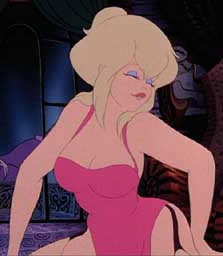 The sound of 1,000 goons fapping.Game play: The game starts out with your character plummeting into Cool World and no instruction whatsoever. From here on, it all continues to slowly slide downhill like that fat kid who tried to use the slip-n-slide but his stubby legs never provided enough speed to send him fast enough. The game adapts the "cashing in" type of game play as its sole purpose is to promote the horrible movie it's based off of. In fact, if I had never done any research about the game, I would have no idea what was going on. The developers made no attempt at all to divulge information about the story, characters, or even how to play or what to do. They didn't even use the lazy ass method of scrolling text across the screen. Nothing!

Since you are vomited onto this land of pixelated shit without any direction whatsoever, the game play exists of walking around randomly dying from one thing or another. In fact, some items on the ground will outright kill you. Occasionally (always), a police car filled with Lego men pulls up and they swarm your ass. You then go to the police station where the most poorly drawn version of Brad Pit in existence tells you to watch yourself. You then plummet to the Cool World again and are immediately arrested once more by the same midget hell spawn. This time, however, Pitt tells you something along the lines of "I warned you!!!" and steals all your money. Now that I think of it, a lot of things in this game steal all your money or kill you if all your money had already been stolen previously by someone else.

If you can manage to keep all of your money and figure out how to get into the bar, you can order drinks from the bartender who subsequently throws said drinks onto the floor. I guess it goes without saying but customer service in this bar sucks. Once you have given the bartender all of your money and soaked the shit out of the bar floor, you're pretty much stuck. You can go back outside but they charge you to get back in (guess I forgot to get my hand stamped).

I only saw about three total screens of the game world (not including interiors) and one had a very impressive but run-down tower. If you decide to climb the tower (good luck) you are told it was a waste of time because you never talked to Holli (who I never saw in the game). At this point I agreed with the game and shut it off. 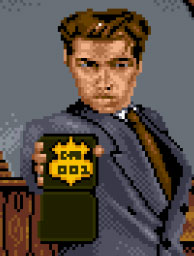 Brad PittGraphics: In the movie the main character is some kind of a cartoonist that just got out of prison. Considering that he drew this world and prisoners aren't always known for their lavish artistic abilities, this game is quite authentic. What I am trying to say is that this game looks like a bunch of shitty prison tattoos lopped on top of each other.

I guess the horrible drawing of Brad Pitt makes it all worth it though.

Enemies: In order to find out which cartoons are enemies and which aren't really comes down to trial and error. Some cartoons talk to you, some try to rob you (before killing you if you don't have any money) and some outright slaughter your sorry ass. In other cases, however, there are characters that just drift back and forth and from what I could tell, had no real purpose other than eye candy. Well, that is if by candy you mean dog shit.
I already mentioned the police and some enemies that steal your money but there are also enemies of inconvenience. For example, one of the buildings has tires falling from it. I have no idea where the tires actually come from since once you get to the top no sort of repository of tires exists, but anyway they knock your ass around without doing damage. The same goes with almost all the enemies on what I deemed the "Holli Tower" that throw tools like screwdrivers at you, knocking you down a level or two.

I remember seeing some kind of rabbit with a carrot that had a nail through it as well as a rabbit with a sub machine gun. They mostly patrolled on the top of some goofy looking buildings so I didn't worry too much about them.

Oh! Near the end of the city some dog that breathes fire hangs out and if you beat him up he gives you some kind of card that lets you get arrested without losing your money but if you punch him off the screen, you're screwed.

Fun: If I were stranded on an island that somehow had the capability to play video games but the only game available was this one, I'd hang myself from a coconut tree.

Defining Moment:FUCKINGKISSING A CARTOON! HELL YEAH BOYS WE FINALLY DID IT (I never got that far in the game)!