Wednesday, Sep 17, 2003 by Zack "Geist Editor" Parsons (@sexyfacts4u)
Hurricanes are a true menace of nature, created by hostile gods that seek to destroy us for our hubris. They think their high speed winds, beating rains, and flung pleasure craft can level our cities and leave our civilization in ruins, but let me be the first to tell you that those cocky bastards have got another thing coming. We are humans and our godlike ability to overcome adversity cannot be matched even by the gods themselves. By following my simple and straightforward guide to surviving a hurricane you too can prove to those who think they can crush us like bugs that we are not so easily dissuaded from our course of galactic domination. You can survive a hurricane!

Step One: Assess Your Surroundings 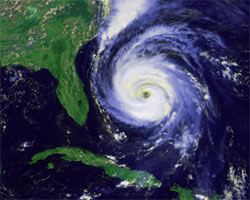 Stop trying to convince yourself that it 'won't be so bad'.The first, and probably most important, step to surviving the impending hurricane is to pause and take a look around yourself. Are you living in a coastal community known for feeling the brunt of hurricanes? If so, good job brainiac, you've just totally fucked up the first step. The easiest way to survive a hurricane is to stay away from hurricanes. While powerful, hurricanes rarely reach into America's fortress of solitude also known as the Midwest. Sure the Midwest can still suffer at the unkind hands of tornadoes, severe thunderstorms, and volcanoes but once you've seen a hurricane up close you're going to think those three are friendly visitors doing a little high speed landscaping. Meanwhile, you decided to set up your thatched hut at the epicenter of hurricane alley and are now trying to act all hard even though you know your roof is going to end up imbedded in the side of a school. So the first and final step for the smartest of you is to move or never live in a hurricane prone area in the first place.

But hey, some people just like to prove they have big brass balls when it comes to laughing in the face of danger, and while it's not the most intelligent thing to do I fully endorse anyone who is willing to die horribly to prove a point. Especially when that point involves mocking Zeus and Poseidon. If you're still making your abode in the direct path of hurricane Humphry then it's time to move on to Step Two in my guide to helping you survive the onslaught.

Step Two: The Window is the Root of All Evil 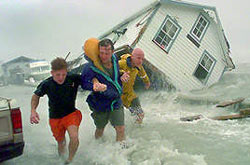 Running like rats from a sinking ship, but only because they didn't follow directions.Windows are the weakest link the defensive perimeter of any home. They are broken by intruders, rocks thrown by mobsters, Spandrel anti-tank missiles, violent house cats, and sometimes even hurricanes. A broken window is bad, but a really fast broken window can be deadly. Most windows are travelling at zero miles per hour and still manage to kill several dozen toddlers and drunks in a year. A window accelerated to thirty or forty miles per hour deals out the lethal pain to hundreds of automobile drivers and pedestrians walking near high rise construction zones. When you increase the speed of the window to almost a hundred miles per hour you start to get into the Danger Zone. It shouldn't take Goose ejecting from his Tomcat to help you understand that the Danger Zone is not a good place to be unprepared.

The first thing you'll want to do is cover your windows with a material less likely to shatter into a thousand sharp fragments than glass. Most people seem to enjoy using plywood, but I would personally recommend something a little more heavy duty like steel reinforced concrete. It's a little known fact that you can build windbreaks out of rebar and cinderblocks for each of your windows in the same amount of time it would take you to cut down a tree and process it into plywood. Additionally, try applying "X"s made out of electrical or duct tape to the inside of each pane of glass. This won't actually accomplish anything but it lets the weather know that you're serious as shit about not dying.

When the hurricane does wash over your house like the apocalyptic roar of the great beast leviathan you should stay well clear of any windows regardless of the level of precautions you have taken. A razor sharp shard of broken glass will punch right through a wooden grandfather clock, into dry wall, slash through the stud, and emerge on the other side ready to dish out a buffet of stabbing trauma to you and your loved ones. Assuming every house in America is identical to my dream house you should have a lead lined vault in the exact center of your home. When you hear the fell winds start a-blowin' just head to your reinforced "safe room" and listen to the soft tinkling of glass daggers as the shatter harmlessly against the titanium outer shell.