At a Glance: In 1989 Sega purchased the rights to do a sequel to the worst fighting game ever, Fist of the North Star. Then they decided that idea wasn't quite stupid enough and remade the exact same game while simultaneously adding 11% more crap, resulting in this vomit inducing time capsule of everything that was wrong with 80's video games. Anyone familiar with the atrocity that is Fist of the North Star should know exaclty what to expect from this game. Or at least that's what they'll think until everything goes fucking nuts, pirates grow robotic arms, and shirts start spontaneously disintegrating. So strap yourself in for this fantastic voyage of 16-bit pain.

The most coherent conversation in the game.

Game Plot: I've never seen the original Fist of the North Star anime, but apparently the storyline was far too epic for a single NES cartridge, because I recently found out that Japan has several games dedicated to this incredible saga of airborne body parts and break-away clothing. There's even an arcade game that teaches players the secret martial art of Jet-Kwon-Do by having them hit padded targets with their fists while animations of people exploding are periodically shown on the screen. No, I'm not making this up, that game actually exists. If I had a choice of going to an ice cream social with either the doctor who found a cure for cancer or the genius Konami programmer responsible for Punch Mania: Hokuto No Ken as my date, it'd be the Konami guy hands down. Medical science may have saved the lives of literally several important celebrities, but it's brilliant things like this game that make life worth living.

Unfortunately, Last Battle is no Punch Mania. In fact, if there was some award a ROM could win for having absolutely nothing to do with Punch Mania, Last Battle would probably get it. The closest it ever came to resembling the aforementioned game was when I passed out from sheer boredom and dreamed about repeatedly punching the CEO of Sega in the groin. And even that got fucked up when the whole thing somehow turned into a fantasy sequence of me getting a back rub from the main character of Last Battle. Even my dreams have been corrupted by this awful game.

The intro informs us that Last Battle follows the adventures of Aarzak, a Jet-Kwon-Do expert on an exciting Too Hot For TV quest to rescue his girlfriend from an evil street gang while wearing progressively fewer shirts than he started with. The rest of the plot is revealed by talking to other characters and isn't hilariously summarized here because it's completely fucking indecipherable. Imagine an edgy Todd Mcfarlane movie where all of the key plot information was whispered to the protagonist by a haunted 6-year-old, and that one of the drunk projectionists at your local theater attempted to write down the script from memory a month later. Then imagine them running their transcript through Babelfish a few thousand times and you'll have some idea of how unintelligible the dialogue in this game is. Whoever wrote it is seriously disturbed, and I don't just mean in the mundane Todd McFarlane kind of way. You know that movie where a joint technological venture between some computer programmers and latex bodysuit manufacturers allowed Jennifer Lopez to enter the mind of a serial killer? Well, that's basically what I have to go through to review this piece of crap.

Enemies: I don't know what makes the ROM 512 kilobytes, but it sure as hell isn't enemy sprites. Don't get me wrong, it was nice to see my opposition finally get some badass looking motorcycles to ride around on, but I think that extra memory could've been better utilized making it so I don't have to fight the same 2 ninjas for the entire game.

In his v-neck shirt and sensible denim jeans, Aarzak is the post-apocalyptic future's nod to fashion!

That said, the enemies still could have been entertaining. In the original Japanese release, people's heads exploded when you killed them, but in this version the people just fly off the screen. Oh, and if you're considering playing through most of the game in hopes that Sega somehow forgot to take the exploding heads out of the last levels, don't bother because they totally didn't.

Number of Levels: 4, unless you count all the levels that use the exact same background, in which case it's more like 27. I don't mean to brag or anything, but I almost beat this game. In fact, I would consider it a draw since the only reason I died in the 10th or 11th identical dungeon was that the game ran out of things to palette swap into "new" enemies and crashed. 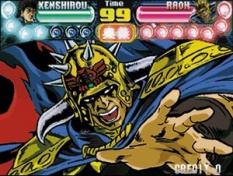 Bosses: Like Lithtech's recent name change to Touchdown Entertainment, Last Battle's bosses are a potent mix of in-your-face attitude and incredible lameness. I should probably put a warning here that if you like fighting games or even gaming in general, the following screenshots will make you cry: 1 2 3

Defining Moment: Right: One of the fighters in Punch Mania: Hokuto No Ken challenges players to unleash the bare-chested fury of the Hundred Crack Fist of the North Star and other amazing martial arts moves. Meanwhile, here I am being chased by 4 flying axes through some depressed, underpaid Sega artist's idea of a room. Maybe it was just the large dose of illegal substances I had to take to make this game playable, but I could've sworn I saw a tear running down Aarzak's pixelated face.