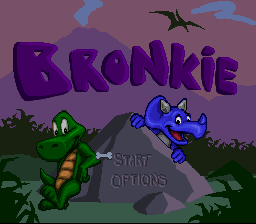 At a Glance: This game describes itself as "a dinomite asthma adventure!", and that makes me wonder if I'm really cut out for this Internet-humor-thing. On the one hand, I can't really blame myself for my ignorance -the game wasn't widely released, as anything that turns the Mighty Dinosaur into a wheezing Public Service Announcement doesn't exactly have the widest appeal. On the other hand, something as ridiculous as a googley-eyed prehistoric midget puffing away on an inhaler is just the kind of stupid that the Internet speaks fluently, so why isn't it a phenomenon? Hell, throw in the fact that the SNES sends yesterday's children (today's creepy nerds) into seizures of nostalgia, and I'm surprised there aren't cannons of irony-laced jizz erupting from the rooftops.
Platform: Super Nintendo Entertainment System, 1995.
Know a terrible ROM? Email me! 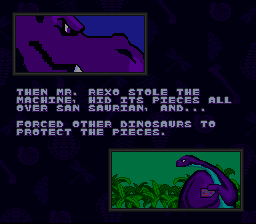 I'd like to point out that the T-Rex is ALWAYS the villain, which is a cruel and inaccurate propogated by the vile herbivorous dinosaurs, who take our hard-earned bedrock chips and only reward us with their shifty-eyed resentment. Remember: There was no mass extinction.ou to another world, and a fuckin' dinosaur world at that. Unfortunately for the hardcore among us, any sort of dinosaur planet is going to suck in the most bizarre manner possible, and "San Sauria" requires a "wind machine" to keep dust out of the air so the dinosaurs can breathe. When the wind machine is broken, it's up to Bronkie and Trakie to Save the Day -as long as you don't forget to "manage their asthma along the way." I guess this is to teach asthmatic kids that they can have adventures as awesome as anyone else's, as long as they watch their health. Just like Bronkie and Trakie!! Of course the game glosses over the fact that Bronkie and Trakie are also a) dinosaurs and b) apparently the consumers of copious amounts of mind-altering substances, which gives them an edge over mucous-encrusted six-year-olds in the awesome department.

Graphics: An Unwritten Law of the Universe (Unless You Count the Internet as Writing and in That Case Shit) states that education does not, cannot look cool, even if you're teaching people to mind-control bengal tigers via distorted power chords. Sorry, but any "edutainment" is at best going to look tolerable; at the bleakest, it's so vile a new Internet fetish will spring up around it. Fortunately Bronkie is bad enough to be disconcerting but not crippling, like your 11-year-old cousin who uploads drawings of Sonic on deviantart but hasn't yet begun to pepper her speech with Japanese. Okay, the textures aren't great and I often can't figure out what plane anything's on, but at least there are colors found outside of toilet crust and the animation looks as natural as a stand-off between Croc's retarded cousin and a tear in the geometric continuum is ever going to. 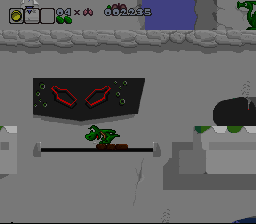 Gameplay: To my further bewilderment, Bronkie is only about as terrible as any other boring SNES platformer, albeit with a smattering of what-the-fuck for flavor. For example, Bronkie has a super special breath attack which he can only perform when he collects eerily realistic lung icons. Aside from the creep-out factor, the breath attack is notable because it's even more useless than Bronkie's regular attack, perhaps because, oh I don't know, HE HAS FUCKING ASTHMA AND PROBABLY SHOULDN'T BE TRYING TO RELY ON HIS LUNG CAPACITY FOR SURVIVAL.

Despite this glaring oversight, the game tries to be educational and help kids learn responsible asthma management. I'd probably just toss in a Tyrannosaur trying to murder them if they didn't check their peak flow, but hey whatever let's go wiwth a gentler approach. In addition to helpful "Daily Meds" tips at the beginning of each stage, it gives you pop quizzes about asthma before you can advance to certain areas via a kick in the throat. Don't worry about a lack of asthma knowledge hindering your progress, though, as the quizzes appear to have been written for kids whose asthma is so bad their brains haven't received any oxygen since the Reagan administration.

Enemies: The enemies are as unremarkable as, well, a fucking projectile-spewing sprite swap in a 2D platformer. There are boss fights at the end of each world, but they consist of you stabbing every button imaginable with no discernible reaction from your foe until 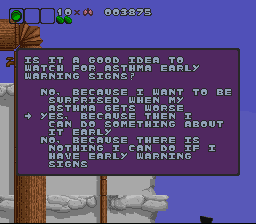 God I love surprises.he apparently grows bored and dies. The big danger in Bronkie is avoiding scary asthma triggers, like disembodied cigarettes and that creepy kid you always see in the corner of the library playing Runescape. Every time you go near one the screen gets a little darker, slowly bringing your world to black for each time you inhale dust. I'm pretty sure this isn't how asthma actually works but why not plant paranoia in the minds of children!! At least you get the educational gameplay mechanic of going into the menu and learning to use your inhaler! Or you could just get pissed and wonder why your parents won't by you a real game (hint: it's because you're not a real person because your lungs aren't good enough and they love your siblings more than you. Put the cat in the microwave, that'll teach 'em.)


Fun: I can't really blame the concept of Bronkie because apparently these kinds of games work, and far be it from me to scream HOW THE FUCK DARE MAKE A MEDIOCRE GAME TO KEEP LITTLE KIDS FROM CHOKING TO DEATH ON A GHOST CIGAR?! Because, really, the game's not that terrible. It's repetitive, it's boring, but at least some of the platform jumping requires some rudimentary thought that could be entertaining for small children. Just as long as their brain cells are in the single digits.