Crafting of Spells: Any fool with a passing knowledge of the D & D rule book can know spells, but to be truly 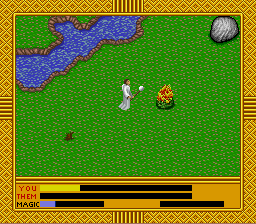 THE FORCES OF NATURE BOW TO MY COMMAND!! Why can't they see my worth...?!great, one must craft them. After I had bludgeoned a fel beast [until its shrieks approached a level of gibbering insanity.] it would drop one of four reagents. These potent shards of the [mage's art are found at random,] and thus 'ts quite possible to obtain 93 candles and one jewel, but 'tis the errand of the wizard. For each spell I then located a unique "aspect," scattered about the massive realm in a location prominent enough to my discerning eye.

Then it was to stone monuments to learn which combination of ingredients would serve my needs. [they dictated riddles to me,] laughably simple for one of my intelligence. I wrote down these trials to remember them, but if I gained a level of experience, I would become excited and scribe down that precious memory instead, thereby losing the riddle forever -for it was impossible to check the stone a second time. Many a spell was lost to the ages as thus, but it would be foolish of you [to call it unfair.] It is merely a mechanism to weed out those less qualified, much like college entrance exams or ethnic cleansing.

Graphics: Verily my surroundings did disquiet me. There was a surreal quality, a blur to all edges, doubtless stemming from the clouding of my eyes from the ether. The creatures were hideous to be sure, as if no care had been put into their design by a horrible GM-- creator. But my dear lady Selina [-how my heart trembles!-] was rendered most lovely, as if worlds had been moved solely for the sake of her tight flesh. The movement of the monsters, too, was erratic; victory was dependent on my dodging their attacks from either direction, but I could scarce tell from which direction these assaults came, and thus my triumph came from taking note of their [subtle twitches and memorizing the creatures' usual plan of action thence.] Navigation was made difficult because my frame of vision was so limited; I felt as though I could see only a tiny part of the world compared with all that

Although you are a fool to think you posess any womanly knowledge beyond my knowing, you will be a suitable vessel, my darling Selina...was available. Curse my parents for imparting me with these faulty genes! But I have proven my worth that I may procreate. They shall not be so lucky, nor any of the inferior races.

Fun: Does the concept of my adventure intrigue you? Do you wish you, too, could use your wits to bring forth magical spells? Or do you think my methods were "lame"?? You think that the tedium involved in unleashing my power was an unsuitable test of will, and wish that there had been a more enjoyable, even "fun" puzzle? Perhaps something easier, so that mere children could enjoy it? You disgust me. A wizard's life is that of passion and damnation; it is no child's fantasy!! Verily, FUCK YOU!!

Defining moment: Indeed it perplexed me when the Wise Wizard warned me that I was to enter a maze. For in sooth, was not my entire ordeal a test of my navigation skills? The terrain blocked my path at every turn, from pits to rivers to bullshit. But as my eyes are able to to see very little of this terrain, it is proving more difficult than I had imagined. [I will not give up.] Although I feel I have been here for weeks, my consciousness pacing to and fro in a state of limbo... Nevertheless, let whirlwinds terrorize my mind's eye! I am a wizard! [And the wizard does not fail.]


The moral of the story is that Raptor Red could have spent the last two weeks watching her beloved-if-moderately-bigoted son die slowly of a psychotic drug episode, and that would have been okay with her. Why? BECAUSE SHE WOULD NOT HAVE BEEN PLAYING SPELLCRAFT.