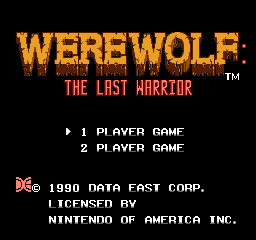 At A Glance: With due apologies (none) to unloved goth chicks and pasty Germanic Studies majors in black trench coats, werewolves are better than vampires. I spend all week barely containing my disgust for the populace at large; why the hell would I want to turn into a foundation-wearing sissy who talks like he's at a cocktail party? No way; I am going to go completely psycho, howling at the top of my lungs, biting your face off, and peeing on your damn leg. Of course, that sort of sounds like my weekend, so I guess that was a bad argument! But werewolves are still mindblowingly awesome... or they were, until the shit that is Werewolf: The Last Warrior made me hate them, you, and everything else that happens to exist.

Jesse Ahlberg suggested I play this game. As a reward, s/he/it will receive this lovely animated .gif!Story: Oops! Aliens have enslaved humanity again!! At least, I think they have; they look suspiciously like ninjas and fat people, which (according to the sexy and svelte Internet!) are admittedly not human. Never mind that their leader appears to be Otacon with a pseudonym that finally embraces his obvious sensitive side. But anyway, you are the only one that can stop world domination and love from blooming in Hal's pants, with the help of this creepyass zombie guy, whose years of being a pile of rot certainly aren't affecting his eloquence! Your power? You're a werewolf with swords for arms!! HOLY SMOKES Billy, that's such a COOL idea for a comic!! Let me go get my crayons RIGHT NOW!!!!

Gameplay: Yet another sides-scrolling epic!! If you get too low on health you become a human, where your only defense is literally to scream NOO!! like a Star Wars character learning that George Lucas has obtained eternal life. But as the Werewolf, you kill harder, jump higher and gain the amazing ability to, uhm, crawl. Captain Human 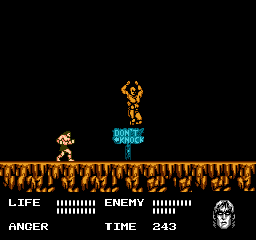 Atlas Lurched.often becomes stranded in this Christ-loathing platform nightmare, because only Werewolf can use his sword-arms to do awesome Spider Man climbing shenanigans.

Unfortunately the game's designers didn't consider that having six-foot-long sword-arms might not be the most practical way to go through a series of platforms and corridors tighter than Kwame Kilpatrick's sphincter. Ever the adorable klutz, Mr. Furry Little Body is constantly digging his Death Claws into shit you don't want him to, such as your disintegrating patience. Ironically, it's almost impossible to latch onto a ceiling; you have to hold twelve buttons at the very pinnacle of Werewolf's Superderp Jump Mk. 3 during a split-second window, which, say, is how all these pointless moves work, on the rare occasions they do! Thanks to this I'd say I spent about 10% of my time in Werewolf actually killing things and 90% either having a white-knuckled aneurysm or watching Werewolf enthusiastically "appreciate" architecture in a way that would send most people to the doghouse.

Graphics: I guess they don't offend me on a profound spiritual level, but my hate is clouding my judgment, so

Don't be fooled: The Boogie is the least of things you should be blaming it on. let's pick 'em apart anyway! There are MAJESTIC CUTSCENES that quickly dissolve into ugly backgrounds and lazy sprites. I mean really lazy, so that when a puttyman changes direction, he's suddenly calling me an entrepreneurial female. Like Mission: Unpossible, you can't always tell hazards from friendly home decor, and the limited color scheme sometimes turns you SPOOKY INVISIBLE!

Enemies: Projectiles are back and they hate me more than ever! Someone, maybe a disgruntled H. Ross Perot, is lurking in the shadows for the whole game, peppering you with dynamite, bricks and deadly twigs at roughly the same speed I get hate mail. In later levels, there are above-ground and underground sections: up top, you'll be subjected to the equivalent of a football team kicking a retarded puppy, whereas below there are fewer bad guys but plentiful "hazards." These are possibly even worse, with conniving waterspouts that actually fake being empty for a split second and lightning that one-hit-kills you if you take a wrong turn on a completely arbitrary (and invisible) path!!

Fun: Fittingly, Werewolf is one of the first games to fucking make me foam at the mouth. Everything is poorly

Watch this, beat your fingers with a hammer, then cry. THAT'S THE WHOLE FUCKING GAME.thought-out, from a tight time limit to layouts as coherent as William Faulkner's childhood fingerpaintings. But it's the goddamn wall sticking that makes me hate it most; not only do you cling to everything under the full moon, but the controls are so sloppy and bizarrely counter-intuitive that it's an adventure to get free. Even if you do pry yourself loose, cramped levels mean you're likely to stick to another shitty platform instantly. I spent the ENTIRE FUCKING GAME feeling like I was playing some sick round of superglue-coated pinball with a fucking mallet.

Defining Moment: The mixed blessing of the shitty "Invisible Rubics Cube"-style controls preventing me from continuing my self-abuse! I had to "high jump" to some stupid-ass platform out in the Obligatory Fucking Cave Level, but because I had to angle that shit faaaar to the right and the jump -ahaha GET THIS- never fucking works anyway, I couldn't actually get out there without plummeting to a shitty pixelated demise. Fuckin' woo!

Oh I'm sorry, am I using an unusual amount of cursey-talk? That's because Werewolf: The Last Warrior is the only ROM I've touched so far that genuinely makes me infuriated. Not bemused, not bitter, but actually fucking filled with church-burning rage. I am going to go home, tie steak knives to my wrists, and punch myself in the stomach until I can no longer remember anything but the pain.

Each category in the rating system is based on how angry Raptor Red is. Currently, she's shaking violently and tearing into the keyboard with her teeth, so we're going to assume this game is pretty terrible.