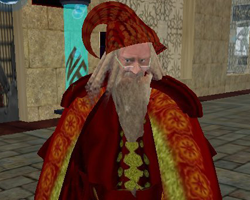 Hint: Dumbledore dies at the end of Second Life!

If you're like me, you often find yourself dissatisfied with "real life". Ejaculated from the birth canal with no control over our circumstances, from the very start our lives are but continuous testaments to the iniquities of economics and class. This is the Game of Life, and too often I find myself choking on the little plastic pieces.

Every day, we deal with injustice. Crime. Poverty. The fact that my high school civics teacher wouldn't accept a video of my World of Warcraft guild's jamboree as an example of direct democracy. Goddamn your icy heart, Ms. Witherspoon!

What is Second Life?

According to [url='http://lindenlab.com/']Linden Labs[/url], the creators and administrators of Second Life, Second Life is "a 3-D virtual world entirely built and owned by its residents...[where] you'll discover a vast digital continent, teeming with people, entertainment, experiences and opportunity. Once you've explored a bit, perhaps you'll find a perfect parcel of land to build your house or business."

Now strictly speaking, this isn't a lie. However, it ignores the fact that Second Life also consists of furry strip clubs and people having hot virtual sex. When I explain Second Life to people, I tell them this:

Have you got your head wrapped around that? Okay. Now make the person in question the psychotic neighborhood kid who slashes holes in the back of the schoolbus with his Swiss Army knife, and you will begin to realize the Lovecraftian horror of Second Life. 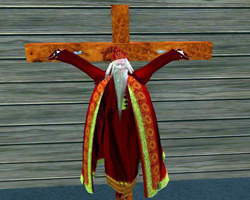 The Passion Of The Dumblechrist

Let Me Attempt To Explain Further

Second Life has a basic free account, but many people choose to pay for a variety of options. But unlike other MMORPG's that have virtual currency, in Second Life the amount of money you have is based on an exchange rate with U.S. dollars. As a child, did you ever attempt to pay for candy with Monopoly money? I did, and it was nothing but pain and misfortune. In any case, Second Life is the exact inverse of that situation: one pays for virtual goods with real money.

"But comrade," you ask, pulling a distinguished corncob pipe from the corner of your mouth and raising an incredulous eyebrow just enough to loosen but not dislodge your monocle, "surely such idiosyncratic behavior is limited to the most simpleminded of the proletariat." Well, I've no idea when you became a Marxist, but you're wrong, because the scale of virtual commerce is huge. When I wrote this article, Second Lifers had spent $494,196 in the last 24 hours.

Let me say that again.

A Brief Digression Before Lunch

Do you know how many chicken nuggets you could buy at Wendy's with that much cash? I bet you don't, because I don't think you have my arithmetical genius. But us Internet writers are on the bleeding edge of 1970's technology, and as such my shiny calculator knows that half a million dollars would buy about 61 miles of chicken nuggets. 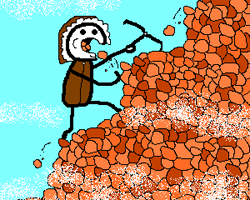 And then it hit me. In retaliation, I ran to my RA's room and hit him, but Steve's kind of pudgy so he just sort of sighed in dismay. Steve is an engineer and can do math though, so I demanded that he calculate the cube root of 61 miles so I could ascertain just how much chicken there was in Second Life. He asked if I was sure I didn't just want a condom and a booklet on fire safety but I said to shut up and start engineering. After several heartrending seconds of uncertainty we determined that the cube root of 61 is about 3.94.

I'm no scientist, but I think this proves that if you took all the money spent daily in Second Life and used it to order chicken nuggets, the resulting mound of meat would measure almost four cubic miles. This would go a good way up Mount Everest! Personally though, I would rather climb a giant mountain of chicken as opposed to a mountain of rock. Rock isn't especially delicious, and it doesn't often come packaged with toys, unless you are like me and your parents sometimes gave granite as an exciting alternative to coal on Christmas.

The problem here is that people are actually buying into Linden Lab's bullshit world. In this case, "buying in" is not a figure of speech: Nissan just bought the exclusive rights to an online island for $1,250 and a $195 monthly fee. The New York Times [url='http://www.nytimes.com/2006/10/19/technology/19virtual.html?_r=1=slogin']wrote an article[/url] about Second Life, but even those crazy liberal conspirators ain't got shit on Reuters, who actually [url='http://secondlife.reuters.com/']created a permanent news bureau in-world[/url] with a full time reporter who only reports on virtual drama. A prominent Second Life landlord named [url='http://en.wikipedia.org/wiki/Anshe_Chung']Anshe Chung[/url] now makes over six figures a year just buying and selling virtual land. 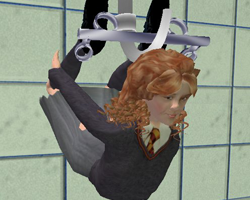 Where are your precious potions now, Miss Granger?

Reebok sells branded shoes for your avatar to wear. You can buy a virtual Toyota Scion with real money and drive it around the grid. Early on in the Second Life Safaris, forums member Ignavus visited a guy who had paid for a virtual house with a big-screen TV. He then uploaded a ripped copy of "The Incredibles" to Second Life. When Ignavus left, this sorry soul was streaming a real movie to his virtual television while sitting on his virtual ass on his virtual couch in his virtual house. And all the while, in his "first life" he was presumably huddled in a corner of his parents basement holding a Sony Viao in a fevered grasp.

As might be expected, the biggest trade in Second Life (other than perhaps land) is sex trafficking. With a few lines of code and a simple animation, your androgynous avatar can become the proud and industrious owner of functional genitalia! Chip in a few extra bucks and you can train your avatar to perform any number of exotic sex acts. This I find useful because it marks an end to my guilt-ridden masturbation sessions to Emma Watson upskirt screen grabs from the second Harry Potter movie. After all, why go through all that when I can easily recreate her appearance in an avatar, take it to a virtual bondage club, and have steaming steel rods rammed through my nubile nexus for as long as I desire.

That Lag Is Your Computer Screaming In Horror

At this point, you are probably thinking to yourself that the very premise of Second Life is so unbelievable, so incredible, so downright ridiculous, I must have erred in my reporting. Surely, you say to yourself: surely, there is no way that so many people could be so sad, so strange, so pathetic that they would spend their hard-earned money to enhance their "second life" at the presumable expense of their first.

But such people do exist, and they live on Second Life. Indeed, what I'm attempting to prove is that the Second Life "metaverse" (they get dreadfully offended if you call it a game, incidentally, because apparently the convergence of furries and money legitimizes the former by virtue of the latter) is quite frightening. Not because people are making money off of it, but because there are people who are willing to fiscally forsake the occasionally harsh and unforgiving world we live in for these digital fantasies. 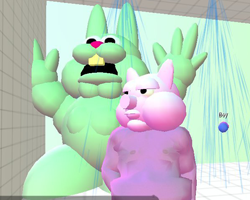 Just because our Safari is conducted over the Internet does not mean it is devoid of danger. Though we need not fear lions nor tigers nor elephants with explosive diarrhea, there are much graver threats to our safety and sanity lurking in this other world. Furries, for example, who sometimes roleplay as lions fucking tigers while being covered in elephant diarrhea.

What poses a threat to us apparently invulnerable electronic explorers? Why, we are risking our [second] lives! Ever since a group of goons created a group that memorably [url='http://www.dragonscoveherald.com/blog/index.php?p=626']forced down the price of virtual land[/url] and [url='http://www.dragonscoveherald.com/blog/index.php?p=666']recreated September 11th in-world[/url], Linden Labs has [url='http://taotakashi.wordpress.com/2006/10/03/back-from-vacation-and-60-people-less/']declared that[/url] Something Awful forum members are outlaws by default. Right now, they're [url='http://www.freedom-to-tinker.com/?p=947']attempting[/url] to have a few goons prosecuted under federal law, claiming that setting off virtual nukes or [url='http://en.wikipedia.org/wiki/Grey_goo']grey-goo attacks[/url] qualify as VWMD's. That's right. "Virtual Weapons of Mass Destruction", which have apparently left Iraq and gone digital!

Me? A cyberterrorist? Such validation is like a brilliant ray of sunshine into my otherwise bleak and useless existence! It makes me feel like a dashing evildoer, which is good, because I'd already grown this intimidating moustache and needed a good excuse to keep it. I hope to one day have a virtual cape and sword so I can go around and cut bemusing shapes into fabric and doors to mark my virtual presence! In real life, I'm a mild mannered liberal arts student. But on the Internet, I'm a fugitive of the virtual law! Such acts of "griefing" are the work, [url='http://secondthoughts.typepad.com/second_thoughts/2006/09/what_whack.html']according[/url] to Second Life Superstar [url='http://secondthoughts.typepad.com/']Prokofy Neva[/url], of "Internet vandals [who] draw from the same playbook as Nazis and Communists and other totalitarians...it's the same principles at work."

HOORAY, I'M A VIRTUAL NAZI. Godwin's Law strikes again! And now that my virtual shenanigans have been equated with the unjust imprisonment and slaughter of millions of greedy Jews, I suppose there's nothing left for me and the Second Life Safari crew to do but give you the chance to experience our hijinks vicariously in the form of a regular frontpage feature!

What fun awaits you! What glorious and soaring heights of experience you will mount like an teardrop atop an eagle atop a flagpole atop an apple pie that, with demure yet tantalizing modesty, barely covers Jessica Alba's breasts! I couldn't begin to describe it with mere words, so I got all Web 2.0 and posted a video of an ideal Second Life soiree instead. Not safe for work because of hardcore virtual nerd sex.

But I must be off: there's an Digital Hitler Youth meeting tonight and I'm late for my seven o'clock goosestep! So goodbye--or, as they say in Germany, "auf Griefersehen!"