Welcome to the Parade of Shame and Eternal Horror!

Some of you nice, nice folks out there may mistakenly believe that us professional retards running Something Awful give the poor, innocent members of the furry community a bad rap. You might think that we unfairly criticize and mock these shunned individuals out of racism, bigotry, and pure ignorance. Our webpage could appear to be a spiteful, hate-mongering tribute to the depths of our writers' blatant insensitivity and outright animosity towards a sexual lifestyle we cannot understand. I will not attempt to argue on our behalf, as I feel the best way to further a dialogue revolves around presenting an opposing viewpoint, one which challenges the accepted norm and attempts to expand the minds of those interested. Today's update will deviate from our standard uncultured, merciless mockery of the furry lifestyle that we normally spew forth, instead offering you, the viewer, an unfiltered look inside the furry mind and a chance to get to know these unique individuals yourself, without any vicious attacks from the SA writing staff to cloud your opinion. I hope that today's update enlightens everybody in a way that you will remember for the rest of your lives, much like the time your drunken uncle arrived at your Christmas party and proceeded to sodomize you with a cordless telephone.

Early September of each year, various proud and upstanding sub humanoid, animal-fucking antisocial douche bag misfits gather together in Memphis, Tennessee, to share their passionate love of screwing plush "Lion King" dolls while imagining they are engaging in copulation with a sexy 14-foot tall female lion with two penises coming out of her breasts, ejaculating enough semen to entirely fill the Reliant Stadium. These intelligent members of the furry community come to the event dressed in the finest wolf, fox, horse, and cow costumes, wardrobes complex and elaborate enough to successfully conceal their raging hard-ons that rise to attention every time they spy a particularly saucy looking skunk costume. I was lucky enough to obtain footage from the Memphit Furmeet 2001, a series of short videos presenting us normal people with an exclusive, "behind-the-scenes" look at what occurs during these furry conventions. I hope my report shines a sufficient amount of light on such social gatherings and allows you, the non-furry, to experience the awesome feelings of wonder and excitement which occurs behind the closed doors of the exclusive Memphit Furmeet.

This prelude of exciting events to come whisks us through the registration desk and outer area used to filter the non-furries (normal people) from the furries (crazy fucks). I assume the federal government and various police organizations passed a law prohibiting furries from coming into contact with non-furries during these events, as the backlash resulting from innocent normal people being exposed to a furry convention would result in a series of Timothy McVeigh-style bombings targeting every conference center throughout America and possibly the universe. A large plush wolf sits behind the obese folks at the desk, serving as a lustful teaser of things to come. A few signs displaying sexy skunks welcomes the furries to their exciting event, undoubtedly causing the testosterone production of arriving members to jump tenfold. The cameraman soon enters the merchandise area of the event, an exciting room full of entrepreneurs building their vast fortunes by selling hats with dragon wings on the sides, and t-shirts which display spray-painted images of humanoid horses showing off their bulging humanoid horse cocks. Surprisingly enough, most of the salespeople and clients appear to be overweight bearded white guys, which strikes me as an incredible surprise in so many ways that if I attempted to list them all, my head would explode and a series of highly animated skunk cocks would come flying out in every direction. The video abruptly cuts to the hotel lobby, where various grown men dressed up in fox, dog, and horse outfits are hugging each other and "talking shop" with one another. You do not want to know what "talking shop" refers to.

VIDEO #3: "The Parade of Shame and Eternal Horror Begins"

The action kicks off into full-swing in video #3, as the infamous "Parade of Furries" starts up and winds its way through the convention hall like a bulbous rancid turd squeezing through a sewer system's pipes. Furs of all varieties, ranging from foxes, horses, raccoons, squirrels, bunnies, and dogs, to the more exotic zebras, pandas, jackals, and lions strut their stuff through the lobby of a hotel undoubtedly gripped by fear. They take turns passing the camera and happily waving, undoubtedly oblivious to the fact that they are grown men who fantasize about fucking farm animals while wearing elaborate mammal costumes costing them thousands of dollars to produce. During this procession of the damned, some brain damaged retarded red fox repeatedly bangs a cymbal in some quasi-rhythmic fashion, perhaps just to make 100% sure that everybody possible was aware of the ongoing exhibition of nature's proudest freaks. Some woman makes a squealing sound about midway through the video, and although I prayed to my false god that this noise indicated she had been shot by a confused hunter who mistook her corpulent, greasy tub of a costume cat as perhaps the Yeti, I'm fairly sure her outburst was a noise she made "in character." I once saw a cat getting run over by a tanker trailer on the highway. I would be interested to know if she would stay "in character" during a live reenactment of such a scene. Please folks, let's make this happen.

As much as I prayed for the world to end, the video simply chugged along on its merry way, displaying more bearded psychopaths in lion, tiger, and bear costumes. The only difference between this convention and "The Wizard of Oz" is that these folks would rather fuck Toto than Dorothy. 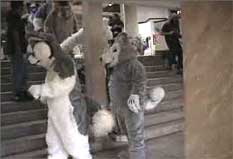 VIDEO #5: "A Whole Room of These Crazy Assholes "

The parade of broken dreams and undying horror moves on to the conference room, allowing the wonderful obese men and slightly more obese men inside the animal suits to check out the wares on display. I'm sure sales of the coveted "Tiger Penis of the Month" calendar skyrocketed directly after the procession marched by, allowing other vendors to liquidate their share of white t-shirts displaying airbrushed images of a wolf howling at a full moon with the URL of their Geocities web address on the bottom. Oh yeah, the annoying bastard in the red fox costume continues to bang away on his precious little cymbal, unaware of the fact that, although I believed it was previously impossible, he's making furries even more annoying than I could've ever imagined. Congratulations, Annoying Red Fox of Shame! You win the coveted "I pray for a load of buckshot to pierce through your chest and spray your entrails all over the hundreds of Chip N' Dale Rescue Ranger figurines you keep on your shelf" award! 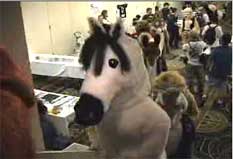 VIDEO #9: "The Legion of the Damned Performs a Skit from 'West Side Story'"

The MC announces the entertainment for the evening, which he introduces as, "Tigercowboy with the new and improved Tigercowboy, is going to do a little skit about 'The West Side Story,' about when good cats go bad." This causes the audience to voice their approval by emitting sexy "meowing" noises. Soon the music kicks in and grown men in animal costumes begin to lumber back and forth, seemingly at random, until the music ends and they are greeted by a welcoming round of applause from overjoyed audience members. I would've preferred a welcoming round of explosive ammunition, but you take what you can get. The DJ lists all the wonderful, upstanding citizens who contributed to this wonderful sketch, names which include "Spike" and "Moonshadow" and "DJ Buttons" amongst others. I hope Leonard Bernstein's ghost rises from his grave and takes revenge at once. 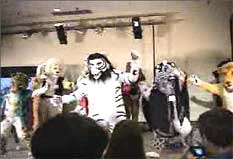 VIDEO #10: "Yappyfox and the Dancing Dorks"

Yappyfox, the red fox who so proudly hammered on his cymbal for the previous nine hours, takes the stage and begins a classic instrumental song. But what's that? A heckler from the audience demands Yappyfox do something "more modern!" Oh the nerve of this completely unrehearsed and unplanned outburst! Mr. Fox retreats to the back of the room and just when you thought he would give up and take his own life, returns triumphantly to the stage with a squadron of dancing furries. The audience is thrilled beyond belief and I'm sure there would be a lot more applause if most of the crowd didn't have one hand furiously masturbating inside their pants. Oh Yappyfox, you truly are the cat's meow! Wait, no, forget I wrote that; I fear it would give them a hardon to receive such a compliment. 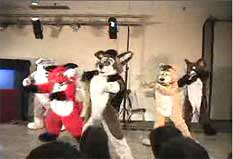 VIDEO #11: "A Horse and a Fat Man Wearing Sunglasses Rotate Around Each Other Until the Music Stops"

I really don't know how else to explain this video than by politely requesting you to read the title. 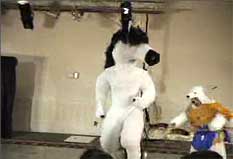 Steelpaw, one of the most creative and intelligent members of the furry community (I'm lying; I have no clue who this guy is and I'm fairly sure that by definition alone there are no "creative" and "intelligent" members of the furry community), storms onto the stage and breaks into an original song and dance number where he grooves to the various furries he meets on a daily basis. Here are some of the many, many wonderful lyrics which don't at all confirm he's so out of touch with reality that his mental condition could only be jumpstarted back to normal health with a series of electric shocks powerful enough to vaporize the Sears Tower:

If you' re in a hurry to be furry
take the phone off the hook
and hop a wagon or a dragon or a taxi
and tell 'em to book.
If you' re lookin ' for a place you can escape to
then you' re in luck .
Check your skin at the door
and come play with us in the MUCK.

Wow, great job Steelpaw. I can't even begin to estimate the number of platinum records you'll receive for this doozy. You'd better ask mom to renovate the attic where you sleep so you'll have enough room to store them all. 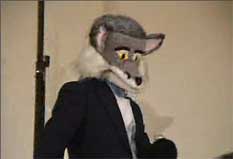 VIDEO #18: "The Closing Ceremony: A Tribute to Unresolved Mental Disorders" 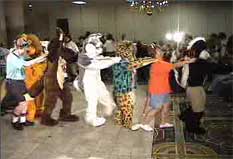 I hope you enjoyed and appreciated our objective, non-biased peek into the furry lifestyle, courtesy of footage from the Memphit Furmeet 2001. I personally hated every single moment of it and am currently researching ways to inject Clorox directly into my bloodstream so it will cleanse the remnants of such a horrible series of scarring events from my brain. Please consider this update to be a service displaying what happens behind closed doors at a furry convention. Well, there are actually a lot of other things that happen behind other closed doors at a furry convention, but I will refrain from mentioning them here because I believe there's at least six readers left who have failed to delete this page from their bookmarks after seeing today's update, and I really can't afford to alienate these precious remaining few. I love you all and promise this kind of thing will never happen again.

GO LOWTAX, IT'S YOUR BIRTHDAY

When I was a little one, I sure enjoyed the Teenage Mutant Ninja Turtles. I bought the action figures and I watched the show every day after school. I recently saw an old episode a little while ago, and man they are bad. Like He Man bad. I can't say the same about these turtles. The Goons have managed to put our little shell backed friends into all manner of trouble. And in 10 years, I'll still enjoy their work. I present to you this week's Comedy Goldmine, "Turtles in Trouble."