Cry of the Space World 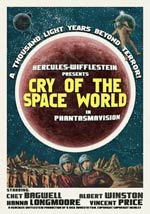 Plot Summary: In the distant future, the Omegaship is plagued by an alien invader with strange powers and a hidden agenda... (more)(view trailer)

User Comments: As entertaining and imaginative as it is hateful of Irish people (more)

Blake: We're approaching the source of the anomaly! 10 gravitons... 9 gravitons... We are now in range.
Capt. Jerry Thunderminder: Focus all wavefactors on fluctuation Alpha-10!
Cad: Fluctuating wave factors on Alpha-10. Polaric synchronization achieved!
Capt. Jerry Thunderminder: Focus forward transversals at the singularity point Beta-12, reverse hypersensors and re-calculate magnitude dispersals!
Blake: This soon? We could rupture the 4th dimensional barrier!
Capt. Jerry Thunderminder: We don't have the luxury of time or safety, Blake. We are past the threshold of danger. Oh, we're long past it indeed! Aboard our vessel lurks an evil greater than any known to man and it is our solemn duty to stop it.
Blake: I am sorry, Captain. I won't question you again.