No Sleep Til State Og

Welcome once again to State Og, voted the most popular destination for people who love reading the words "State" and "Og". Only State Og dares to bring you State of such fine quality, such delectable Og, then go beyond the call of duty by combining the two. As always, special thanks go out to: Matt "Krang" Eckert (Lava Level), Aaron "Elcybergoth" Young (Slippery Ice Level), Brett "Nimmo" Hurban (Annoying Underwater Level), Michael "Slash And Burn" Hollenbeck (Boss Castle), and Jason "Vengeance Otter" Johnson (Another Castle, with the Princess).

Even us at State Og need to have fun sometime, and that’s why we recently put our State Og High Jinks line of products on the market. With these side-splitting pranks, you can give your friends a laugh they won’t forget. Unless, of course, you own a State Og Forget-o-Ray, in which case these pranks never lose their fun factor even on the same friend! Here are a few of the State Og High Jinks products you can find at your local reseller:

State Og Surprise Flower
Wear this flower on your suit, and entice your friends with it at your next party. The joke is on them! The flower is actually a high-powered pressure machine, activated by a pump in your right hand that conveniently happens to be in your pocket. From a small hole in the flower, a jet of State Og Sulfuric Acid will say hello to your unexpecting friend. Just pump a few squirts of it into your friend’s eyes and nose and he’ll think twice next time before stopping to smell the flowers. You can also gather multiple friends around your Surprise Flower so they can all experience this rip-roaringly hilarious prank!

State Og Hand Buzzer
A new hand buzzer for a new generation, this State Og version puts a little more hilarious into the formula. Just greet a friend or stranger with the State Og Hand Buzzer attached and move to shake hands, and before he knows it, he’s hit with four thousands volts of State Og Electricity--truly rattling his bones. His body’s not the only thing that’ll be moving sporatically though, your friends will be shaking with laughter at this State Og prank!

State Og Glass Candy
Offer a simple piece of candy to your victim for this prank. Little does he know when he takes his first bite of this candy, he is chewing into humiliation! State Og has developed a new candy that, when triggered inside the stomach by the inner lining of mucus, transforms into ten or more shards of glass which are each bigger than the original piece of candy! Just try to keep a straight face with your buddies who are in on the gag as your friend doubles over in pain a few hours later. He will never suspect you or your candy caused this hilarious glassy mess!

There you have it, three of the new State Og High Jinks products! Remember to also check out the State Og Nerve Gas Whoopie Cushion (your friends will find out just how bad his gas is!) and the State Og Fake Time Bomb*.

*State Og Fake Time Bomb is not actually fake, surprise your friend with the instructions** on disarming it seconds before it goes off!

The next revolution in the world of high speed Internet connectivity is almost upon us thanks to State Og! Last week our top-notch researchers successfully completed tests using an innovative new network. In mere hours they transmitted a whole megabyte of data, somewhat error-free!

How does this amazing new technology work, you ask? You're not supposed to ask, you're supposed to buy, scum! Fortunately, we're feeling unusually generous, and will let you in on the secret: homing pigeons. Our data relay system is comprised entirely of a specially trained flock of homing pigeons which are painted white for 0, and black for 1. Every time a data packet is to be sent out, it is converted to a binary stream of ones and zeros, and electronic impulses are fired directly into appropriate pigeon skulls. This causes them to fly with great haste to their destination and then die of massive cerebral hemorrhaging. The color-coded corpses are then converted back into a data packet, more or less exactly as it was sent out!

The advantage of this new network is that we no longer have to rely on crummy copper wiring and optic fibre. Instead we use Mother Nature's own broadband, and slaughter it in the process. Remember, homing pigeons have been around for thousands of years; they must be doing something right!

We at State Og have worked for many years to be your leading supplier of nuclear materials. Unfortunately the cave that we use as an underground nuclear waste depository has become overstocked. If we do not remove some of the hazardous materials, we cannot continue to provide you and your family with nuclear powered can openers, toasters, faxes/printers, and other appliances that are most efficiently run by nuclear power.

We need money to help find a new cave, and build a new underground waste facility. We will not ask for donations because we wish to earn your hard earned cash by giving you something in return. Therefore, we ask you to visit the State Og Caverns of New Mexico. For just $1 per person you can take a guided tour of one of Earth's great natural wonders. Once you reach the end of the cave, you will even be given one of the cave's mysterious glowing rocks. Take it home as a souvenier! The beauty of the rock will make your children swell up with joy.* What other caves have you visited that allow you to take the amazement of a natural wonder home with you?

*Doctors may confuse the swelling caused from joy as radiation poisoning. Pay no heed to it. 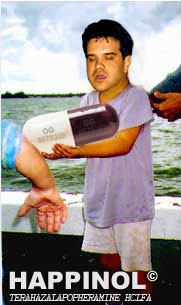 Here at State Og, we're more than just collection of heartless opportunists whose rapacious greed is reinforced by transfusions of reptilian DNA-- we're also concerned parents. And nothing concerns us more than Juvenile Thingy Disorder, a crippling disease that leaves children undersized, hairless and largely unable to function without food or water. JTD, also known as Bellingsworth's Syndrome, has reached pandemic proportions and recent studies indicate that the very future of humanity may be at stake unless we start "jamming pills down these little bastards' throats right now."

Sometimes, Mother Nature locks herself in a room with a man she says is your uncle and doesn't come out for hours. At times like those, it's up to us to fend for ourselves; whether we're fighting hunger, lying to bill collectors, or, in this case, treating a disease. Undistracted by the moaning and grunting coming from the locked bedroom, State Og has surpassed all expectations and ignored all court orders in order to bring forth Happinol™, the first drug ever rejected by the FDA for the treatment of JTD.

With a low dose of five kilograms four times a day, a regimen of Happinol™ is the fast, easy, harmless* way to make the lives of you and your children unencumbered by wholly unnecesary realities. Consult a physician to see if Happinol™ is right for your child. Preferably one of our doctors, because yours is probably a thieving pervert who will lie to you, cynically exploiting this awful disease for his own sordid profit. It's a bright new day for our children, and our families, and our families with children, strolling hand in hand with Happinol™ and State Og through a pharmacological wonderland into a joyous future.

It's a Tragic Day in the Neighborhood

Recently, the world was shocked and saddened at the news of Fred “Mister” Rogers’s death at the age of 74, due to stomach cancer. Even more recently, the world was shocked and horrified when two State Og agents casually walked in on the private funeral ceremony and tried to nonchalantly carry out the lifeless body of Mr. Rogers, in front of the thirty appalled mourners. The duo didn’t get far when David “Mr. McFeely” Newell opened his jacket, produced a Heckler and Koch UMP45 submachinegun, and skillfully shot each of the pair in the head with two tight bursts.

This all seems to be part of a tragic misunderstanding, since those agents were only trying to recover Mr. Rogers’s embalmed husk so that a State Og scientist could preserve him for the ages as a permanent icon for children’s television. You see, our sole benevolent intent was to replace his skeleton with a new T8000 Robot Endoskeleton, so Mr. Rogers’s mechanically animated cadaver could go on teaching the children of the world in our new children’s education show, and maybe very once in awhile go back through time to kill the parents of people who really tick us off.

Since our plans were dashed by the expert marksmanship of a faux-mailman, we’ve had to search around the world for the best person to star in our new educational kid show. We were pleasantly surprised that the clear-cut candidate wasn’t a person at all and resided in an electrified cage in one of our many secret laboratories. Of course I refer to Mr. Chuckles, everyone’s favorite example of what happens when State Og scientists play God, or a role-playing game in which you play a God-class character!

As you may know Mr. Chuckles was made by our Frankenstein-esque State Og scientists, who built him not only using the body parts of four of the deadliest saltwater crocodiles we could find and genetically reengineer, but also out of the parts and organs of several people, each belonging to a different ethnic group. To match Chuckles’s diversity of body parts, the scientists brilliantly modified a crocodilian brain to strive for perfect political correctness and a sense of collective equality. For example: if, hypothetically, he accidentally bit off the arm of a white child, his personal sense of equality would compel him to bite off an arm of a black child, a Hispanic child, and an Asian child. After this, he would repeat the process for a child of each ethnic group, but of the opposite gender. He’s the Jessie Jackson of the monster world and he wants your kids to audition for roles on his new educational children’s show: Mr. Chuckles and Friends' Fun Learning Time and Cooking Hour. Stop by one of our many offices and take the first step in starting your offspring's acting career today!

Hey, I shouldn't be telling you this because it's an unfair advantage to the other kids, but you can dramatically increase your child's chance of being accepted at the audition by letting him or her sit overnight in a bathtub full of teriyaki sauce. Good luck!