Welcome to another carefully crafted edition of State Og. The commitment we pledge to our readers and unwilling servants holds true in this update more than ever: We may not kill everyone you love, but we promise to at least seriously injure them, and poke you in the eye if possible. Special thanks to our agents who are currently running various space-based missions for us: Aaron "Elcybergoth" Young (Norfolk Shipyard), Jason "Vengeance Otter" Johnson (Trenton Outpost), Ian "Kill Maestro" Hill (Battleship Missouri), and Dennis "Corin Tucker's Stalker" Farrell (Fort Bush).

Recent market research in key demographic areas such as Nuneaton, Cheshire, and Ipswitch has shown that most of our customers are lonely shut-ins with a total inability to form a rapport with a living, breathing animal. So we set our cybernetic cyborgs in the cyborg labs to work creating the perfect product for all you miserable wrecks. The result: the State Og Ohno! 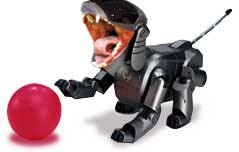 This beautifully crafted abomination looks like any other robotic dog, but it's so much more! Beneath its sleek exterior are 259 motors for controlling the legs, tail, neck, pneumatic jaws, and prehensile penis. A small and powerful, yet very safely contained black hole inside provides enough power to keep the Ohno active well into the 81st Century, with enough juice left over to heat your home during the long winter! By far the best feature of the Ohno is its brain; we've scrapped clumsy silicon in favor of a network of 42 living rat brains, all operating in perfect harmony to imitate realistic and sometimes psychotic behavior!

The ability to fetch on command. Whether it be the morning paper, a stick, a fire hydrant, an obese man who's unable to leave his house, or a car full of Mormons, your Ohno will track it down and drag it back with ruthless efficiency.

Simulated urination. At random intervals your Ohno with emit a stream of warm simulated urine. Unlike actual dog urine, this stuff is delicious and contains over half of your recommended daily vitamin C intake. As an added feature you can set the Ohno to dispense steamy cups of deliciousness at parties. Good boy!

Every Ohno we ship comes equipped with a full compliment of State Og Mechani-Fleas, mostly due to a fuck up at the factory. Mechani-Fleas are an improvement in every way over actual fleas, with diamond tipped pincers that can drill through solid steel to get at blood, and THEY CAN'T BE STOPPED!

Order a State Og Ohno today and receive the limited edition Son of Sam add-on pack. At all hours of the day your little buddy will incessantly badger you until you blow some people away! Think of the adventure!

How I Learned To Stop Worrying And Love The Og

Many of you know that since the fall of the Soviet Union, there have been a disturbing number of nuclear warheads missing from their inventory and unaccounted for. State Og knows about them, of course, since we sell maps showing the secret passages anyone could use to infiltrate Russian security and claim their fissionastic prize. Because of this, many of you have sent in angry letters demanding we stop selling these maps and help recover the absent nukes. Well, fret no longer! State Og hears your request and we’re going to give you exactly what you want!

You will be pleased to know that every single State Og technical specialist has been reassigned to hunt down all the missing Soviet-era warheads. These techs have a special insight regarding the search for missing weapons, since they were up until now looking for over seven hundred missing State Og Brand Doomsday-Devices. They were pretty busy doing this, but your angry letters helped give us some perspective and made us realize where we should place our priorities. That pesky doomsday-device problem will just have to wait.

To be honest, we weren't having much luck finding any of those doomsday-devices anyway. Hell, we not only lost hundreds of doomsday-devices, we managed to somehow lose three of the five factories that make them. Let me tell you, if you ever hire a bunch of sanity-impaired scientists to mass produce doomsday-devices, and they ask to include rocket boosters in factory construction budget, you better say, "No." In fact, you better say, "Hell, no!" If you don't, the next thing you know, your factory is blasting off into the air and flying away to some secret island base or trans-dimensional fortress.

Anyhow, if you should happen to find one of our doomsday devices be sure to let us know. They all look like a small nondescript black box with a red button on top. Some models are engraved with the words, "Push button to win undreamt of wealth." The only way you can really tell for sure if it's a genuine State Og Brand Doomsday-Device is by pushing the button. If it sets off a 45623401772384749 gigaton explosion, it's the real McCoy.

Androgyny = Fun For You and Me

We all know charity begins at home; thats why most of us give to schools or hospitals, save for our children's future, and pilfer money from grandma's purse once she's knocked out from the cough-drop she's been sucking on so we can buy replacement shirt buttons. And whilst the New York Times actually branded us "uncaring hateful demon hellspawns," we at State Og do donate to a specially chosen charity. It's a grass roots scheme established to help a small local charity that provides help and support to androgynous-looking teenagers of all sorts. Boys with hair that's a little bit too long to look male, and lumpy breasts with bizzare pert nipples, or girls with slightly-too-much hair on their top lip and weird wispy sideburns. Young men and women whose sex is unidentifiable when they talk on the phone. Kids that will have most of their adult life ruined because no-one can really tell what sex they are without having to feel their genitals. These people will be plagued by store clerks and receptionists calling them both "sir" and "madam" in the same sentence.

You see? Sheer hellish torment. Never will these men be able to walk past a perfume counter without having effeminate scents sprayed at them, and never will these women live past the shame of being given a Vanilla Ice crew cut every time they go to the hairdressers.

We at State Og care. Thats why this weekend we'll be holding a garage sale, with all proceeds being given directly to them. Some items will be products that didn't make it off the production line, other items will be shit that we simply couldn't sell. Out-of-date milk, a photo of a dog wearing a bomber jacket, glow-in-the-dark lightbulbs, somebody's penis in a jar, R Kelly home movies, and a "do-it-yourself" hairdressing kit are just some of the things you can get down at the "help sir/madam get a better life" garage sale. Have a heart, and please dig deep. After all, your child could turn out this way too. Help us gain enough money to lobby for euthanasia, or who knows how many people will end up this way?

Retiring With Dignity, and Possibly Wombats

Are your elderly parents getting old and wrinkly and starting to smell bad? Wouldn't it be nice if you had a nice place to leave them until they die? Or maybe it's time to put all of them together so they can "get some". Are standard retirement homes too expensive and depressing? Hey, do you also care about endangered animals?

State Og is proud to announce the opening of the State Og Retirement Pasture and Wildlife Preserve. There are no cramped and stuffy environments here; your loved ones will have acres of untouched land to roam free in. They'll have plenty of company too, as the park is filled with all manner of endangered animals: hawks, snakes, lions, tigers, bears, manatee, and people who defy us. Your folks will run free for the rest of their days, especially if they're really good at climbing trees in a hurry.

The finest in care awaits residents and the Retirement Pasture and Wildlife Preserve. Meals are served from several troughs three times a day. Mmmm, tasty! Vital medicines are provided by our trained technicians, who will chase down patients in their jeeps, tag them with a tranquilizer gun, and release them back into the wild. Keeping senile old coots in line is not a problem here, as we have special ways of dealing with sass having to do with our pool of endangered piranha.

Set your parents out to the State Og Retirement Pasture and Wildlife Preserve and set them out to fun!

From time to time, our celebrity safety awareness spokesperson Burt Reynolds drops by with some helpful hints to make everyday life a little safer for all of us. Let's see what advice he's got in store for us today!

"If you get stuck in a trash compactor which is slowly closing in on you, be sure to have a fiesty droid nearby who can shut it off at the last second and save you. If for some reason you have no droid, try to be made entirely of gas, because gas cannot (AS FAR AS I KNOW) be crushed."

Rocketing Into the Future

Here at State Og, we're very concerned about the progress of technology. It's 2003 for Christ's sake, and we don't even have indoor plumbing or jetpacks. Well now our futuristic society no longer has to worry about the latter, because State Og Jetpack brand Jetpacks are entering production!

But forget about the creamed corn, because now you can actually blast into the future - and possibly into thousands of small flaming chunks - with the State Og brand Jetpack. Using a powerful fuel which is a highly scientific amalgam of elements we like to call "hooch", your jetpack will have unlimited power and flammability. You'll have the ride of your life as the uncovered booster engines torch the backs of your legs, outputting so much raw power that people are bound to stare and point at you. Go ahead and wave back, and resist the urge to steer into that nearby pool of water to put yourself out... because you can't!

After your seven second ride (possibly shorter depending on the amount of obstacles nearby), the jetpack will gently float to the earth's surface at over two hundred miles an hour, deploying a tiny parasol instead of an actual parachute, for obvious reasons. Upon landing, your jetpack will emit a beacon which will call State Og for assistance. This signal should last approximately three seconds before the self-destruct mechanism kicks in, because we are that confident in the speed of our nonexistant Recovery Team.

There's absolutely no reason not to get a State Og brand Jetpack, so start saving up. The future is finally here... sometime soon!