It's In the Game!

A few months ago, our very own Dennis “Golden Girls’ Stalker” Farrell promised to revolutionize the dull and uncompetitive world of home video games by drawing up plans for what he called the RedundANT-Xtreme Entertainment Console for Advanced Gamingization Action. As excited as many people were about the prospect of a new console and in spite of all the high expectations we at State Og had for this project, we were unfortunately unable to lure Dennis away from his favorite opium den long enough to complete his work on the system design. Sadly, after we looked into the matter more, we realized this whole project was a sham and nothing more than just another one of his hare-brained schemes to misappropriate R&D funds to purchase all the Pippi Longstocking hentai magazines he could handle. And by “handle,” I mean grind into a fine powder, mix into a saline solution, and inject directly into his jugular. 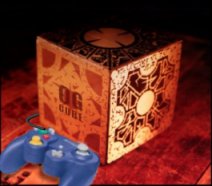 Pictured controller is not required. It is not with hands that you play the Og Cube. It is with desire.

But fret not, gentle reader! State Og will not let you down this holiday season, because our new Og Cube game console will soon be on the market! I know some of you are wondering how many polygons and monogons the Og Cube can generate per second and crap like that, but for all of you wondering about our console's specs, I’ve got three words: There are none!

You heard right, folks! Our revolutionary new game system is 100% electronics-free. How? Simple, while other companies choose to put their faith in unproven and shaky theoretical concepts like using “electricity” in their designs, we chose the more straightforward and elegant solution of making a small box that contains nothing more than a gateway straight to Hell. We figure whatever comes through this dimensional portal will know how to turn an otherwise empty box into a fully functioning video game system and be reasonable enough to comply with our commands.

Here are just a few of your new magical friends, who will appear and whisk you away to an enchanted land of pleasure* and gameplay after you turn on your Og Cube, or merely think of their name. (From Left to right: Chatterer, Female Cenobite, Pinhead, and Derek Smart) * "Pleasure" is subjective term, and any form of pleasure that involves hooks and / or chains isn't covered under the Og Cube's 90 minute Warranty.

Our first product test was an unqualified success. Immediately after turning on the prototype Og Cube, four black-clad humanoids -which looked like they were the victims of an explosion inside a hardware store that catered to gothic carpenters- entered our world. They immediately began to disembowel, disassemble and disrespect one of our interns, Ted, and as they did so they told him, “This is only the beginning of your sweet suffering!” Since Ted was a real dick, the demonic quartet was instantly popular with our research team. In fact, the whole team formed a circle around the spectacle and broke into song as the four visitors went to work on the hapless intern.

To make a long story short, twelve interns later we were able to iron out a mutually beneficial agreement, in which the demons or space pixies or whatever they are agreed to use their magic powers in lieu of actual electronics to allow the Og Cube to function as game console. They not only said that they could do this, but they had other "special experiences" planned for people who use the Og Cube, and implied this would be much more fun than playing a mere video game. We don’t know exactly what they mean by this (and frankly don’t care), but we’re sure that if demons from Hell know anything, it’s how to have a good time.

This update was not written by a State Og agent. Instead, I am an agent of an anonymous employer, whom has infiltrated State Og to the point of having enough power and influence to contaminate this update. This is a warning for you to dismantle your company and release all of the hostages that you have taken throughout the lifetime of State Og.

At this point, the window washer began to clean the outside glass. All of the agents promptly pulled out their laser pointers and tried to blind him in an attempt to make him plummet to his death. This, however, did not work since the window washer was used to such treatment, so the agents resorted to using a cannon to accomplish their objective instead.

To wrap up the meeting, Agent Corin Tucker's Stalker threw a dart at a board upon which the names of several countries were written. The dart struck Nepal, but since there were no Nepalese working for State Og a Costa Rican was fired by default.

Agent Nimmo soon discovered the man who typed this very report, and quickly dispatched of him. Nimmo decided to allow this report to be shown to the public anyways, since State Og does not care what the outside world knows about its inner workings and is not concerned about public backlash. But then Agent Nimmo began to wonder how someone who was studying State Og so intensely did not realize all of this before Nimmo had broken his neck. Sadly, Agent Nimmo may never know.

For insurance purposes, we must publically list all injuries that occur in a given month at State Og. While we believe that a majority of the claims are faked by money-hungry people who somehow eat money for sustenance, we must list them nonetheless.

- 39 fingers were found in a desk drawer, not all of them believed to have come from the same person

- 1 window washer discovered a cannonball-sized hole in his abdomen, obviously a result of prolonged exposure to cancer-causing cell phones

- 4 electricians contracted Pac-Man fever, the only cure for which is a severe beating

- 4 men were allegedly the recipients of severe beatings, most likely a false claim

- 1 guy is really scared of Abe Lincoln. He isn't really injured or anything, but he just won't calm down. Idea: move the deceased president's body out from under his desk, somewhere where it won't bother the employee in question. Perhaps leaning against the file cabinet, or haphazardly sprawled across the ceiling fan.

This list does not include fatalities, employees under the age of 22 and over the age of 24, or people named Chet. Take that, Chet. You asshole.