State Og: A Star Wars Reference in Every Update or Your Wookiee Back

State Og is intended for reading purposes only. Do not attempt to digest, shake, or engage in a staring contest with State Og. Under no circumstances should you let State Og drive, no matter how much you've had to drink. Thanks this week go to Jason "Vengeance Otter" Johnson (son of Mashor, the destroyer of worlds), and Dennis "Corin Tucker's Stalker" Farrell (son of Allen, filer of papers).

Og Employees: Vote “NO” on the Referendum to Recall Dennis Farrell as State Og Representative

My fellow employees, now that some of you have been inspired by recent events in the state of California and have decided to take advantage of our company bylaws to instate an emergency election to remove Dennis Farrell from the vaunted position of State Og Representative, I want to take a moment of your time and persuade you that his reign of tyranny isn’t so bad, and can be even mildly enjoyable with the proper amount of K-Y gel. 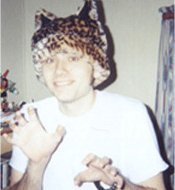 It’s hard to take someone who’s always wearing a hat like this seriously, but when he has his own 80-man SWAT team at his disposal, you somehow learn to manage.

First, let me remind everyone how Mr. Farrell, in the role of general manager, has improved our working conditions. It was Mr. Farrell who made our workplace less distracting by removing all women and minority employees, just as he put a fun new spin on casual dress Fridays by introducing his “casual wear-white-sheets-Friday.” Dennis was also the one who went around our headquarters and personally drilled into each and every cubicle and office wall a new “glory hole.”

Yes, some of you may want to see Farrell replaced, or even savagely flogged, but in our hearts we know he really loves us and cares, despite his behavior. He may walk around wearing a scuba tank and respirator just so he doesn’t have to breathe the same air as us, but he still values our contributions to the company. He may send out an email every day right after lunch announcing he “took a healthy dump” in whatever was served as the cafeteria’s daily special, but somewhere deep down inside, I think we all know that he probably just peed in it. So please join in me in voting “no” on this silly little effort to recall this great man and three-time winner of the National Cabaret and Male Review Association Award for Flametasticness. A “yes” vote would probably break his little heart, just like when he was kicked out of the Klan for breaking their stringent “don’t ask, don’t tell” policy. Come on and be a sport! Vote "No!"

Charlie and the Og Factory

State Og is proud to bring you the giveaway of a lifetime, or seven lifetimes if you're a dog that somehow learned to read and can understand basic concepts such as this giveaway. What would it be like to win a million dollars, permanent residence at the Playboy mansion, and an authentic space suit once worn by Pittsburgh Steelers head coach Bill Cowher? I'll tell you what it would be like: incredibly weak. I'd even go so far as to say it would be the weak sauce. We'll leave such prizes to the winners of lame giveaways such as Publisher's Clearing House or the Make-A-Wish foundation. If you want REAL prizes, then you'll want to enter the State Og Prizestravaganza!

When you purchase a bar of State Og Lye from now on, be on the lookout for the Golden Lye bar, not to be confused with the product's typical deep yellow coloring. If you're the lucky winner that finds the golden bar, you'll be picked up by a golden limousine and whisked away on a golden airplane headed for State Og's magical headquarters. Enjoy the flight while relaxing in a luxurious golden first class seat, dining on golden peanuts and drinking cheap vodka (scaldingly hot molten gold available upon request). Assuming the plane is able to leave the ground or even land without tunneling under the runway, State Og's famous staff writers will greet you at the airport. From there, you'll be rushed to the hospital to have the contents of your stomach pumped. Gold? What were you thinking?

At the conclusion of the tour, you'll be handed a straw (flexible, possibly with blue and red striping) and forced into a room full of corpses, left with only the vague instructions, "get to work". If remember that we left you alone, then approve of your results, you will become the sole heir of State Og. That's right! You! You could own (but not have any influence on the operation of) the world's largest corporation, and be personally responsible for its endless stream of lawsuits and numerous outstanding debts!

Join the madness today by purchasing as much State Og Lye as you can carry, then buy some more and make your grandma try to lift it all! Or your grandpa, either way!

(Actual chances of winning giveaway are 0/493,929. This promotion is co-sponsored by the Math Awareness Council.)