A friendly reminder from State Og: Did you remember to set your clocks three hours ahead on Friday? Don't feel stupid, most people forget to do it every year! We just thought we'd do our part to help out by reminding you, as part of our continual committment to customers. Thanks this week go to Dennis "Corin Tucker's Stalker" Farrell (the poor man's Charles Bronson) and Jason "Vengeance Otter" Johnson (the rich man's Chuck Norris).

Aside from getting our weekly publication together, we at State Og don't really have any responsibilities. So how do we pass those hours and hours of free time? By playing records backwards in order to find secret messages, of course! Duh! This has been a remarkably slow week around the offices, so I thought I'd share just a small fraction of the messages we came across.

Song: U Can't Touch This by M.C. Hammer
Hidden Message: "The most underutilized word in the English language is 'beluga'! Try using it in a sentence!"

Song: I Got You Babe by Sonny and Cher
Hidden Message: "Hug your parents, go to church, and practice safe sex if you decide not to abstain. LUCIFER COMMANDS YOU!"

Song: In Bloom by Nirvana
Hidden Message: "I see no downside to using heroin whatsoever. Is that... is that a giant molecule on my face? That shit's really scaring me, someone shoot it off! Wait, it's gone now. I hope that thing doesn't come back! (nervous laughter)"

Song: Hey Ya! by Andre 3000 of Outkast
Hidden Message: "Battlefield: Earth was a pretty fucking cool movie. Buy it on dvd today!"

Parents, please pay close attention to the music your kid is listening to. Kids, listen to your parents. Ghosts, stop touching me while I sleep!

This is Just a Test

This is a test of the State Og Emergency Broadcast System. This is only a test.

If this had been an actual emergency, we would have lied to you, claiming that this was only a test. Meanwhile, a tasteless and scentless neurotoxin we like to call "Ogicide" would have been released from a small chip inside of your computer, spreading via the pc's fan and killing you within minutes. Your life would have been over before you could open your case to confirm that there is indeed an Og brand chip in your computer, just like the one built into every motherboard made in the past 20 years.

This is only a test, and you have nothing to fear. That's exactly what we'd say to calm you as your central nervous system began shutting down, your life being extinguished for reasons you would never be given the opportunity to understand. In all likelihood, your corpse would be found with a smile on it's face, your last thought being that this was sort of funny.

This has been a test of the State Og Emergency Broadcast System.

State Og in Crisis II: The Rebellion is Nigh 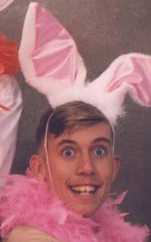 Judging by it's quality, I'm confident that Backslash Tech Toons has many dedicated fans.

There was once a time when I considered State Og Representative Dennis "Corn Fucker's Stalker" Farrell a close friend whom I could always trust to watch my back during all the perilous situations we faced together (often in combat against public health inspectors) and to later lavish said back with hot, sumptuous oils during the many post-perilous situation celebratory orgies, wife-swaps, or parades in San Francisco that we used to attend together. Unfortunately, that time is now over, since I recently discovered that Farrell has committed what can only be described as a hate crime most foul: he displayed total disrespect for the web comic Backslash Tech Toons. As a result of this outrage, now begins my call for this tyrant to be violently toppled.

Since the unwritten Constitution of the Internet and the Magna Carta prevent me from showing or even looking at an actual sample of Backslash Tech Toons, here is an artist's rendition of what it may look like.

Some people might say, "Hey, Vengeance Otter, all Dennis did was make fun of a web comic. Why do you want to see him deposed and killed?" First, I don't want Farrell killed for this transgression, only buried alive in the Ancient Egyptian Tomb of Sigmund Freud and His Entourage of Undead Horrors, where Farrell's survival will depend wholly on his own wits and his knowledge of what role beards play in obsolete psychodynamic theories of human psychology. Second, I am not one to sit idly by as the good people of Backslash Technologies are dealt whatever unfair abuse Dennis "Judge, Jury and Sexecutioner" Farrell feels is appropriate, just because he and a number of others claim Backslash has ripped off Outland and Bloom County. I'd like to think the alleged claims of plagiarism are all false, and that Backslash has simply embraced and improved a few instances of these tired old comics, thus making them more exciting for today's fickle Internet user. Truly, Backslash Technologies does the Lord's work.

Third, I have dibs on Farrell's parking space.

I'd like to think that our Representative could be be forgiven for this whole mess by making a heartfelt apology. Maybe that would be enough for the decent salt-of-the-earth people at Backslash Technologies, but not for me. My hard-earned trust for Farrell has been lost and there are only three things he could do that would merit the return of my trust, and they all involve mummies biting him to one degree or another.