At last week's endangered species dinner benefit, we accidentally served bald eagle as the main course. We apologize for thie greivous error. It was supposed to be the appetizer, followed up by a delightful white tiger quiche. Special thanks this week go to: Don "Motorcycle" Jolly, Nick "Loden Taylor" McDermott, and Tom "Smoking Dragon" Clancy.

A Merry Christmas To You And Yours From State Og

Heading into the Holiday Season, there are several office behavior policies we at State Og feel should be addressed. Seeing as how this is the season when the frosted gods of yore raked their mighty frozen axes across the land and cut the boiling swaths that would become the seas, we at the head office would like to preserve that festive spirit without offending any of the "religiously disadvantaged" persons in our employ. Towards that end, employees are to adhere to the following guidelines until such time as our sages can divine the "jolly calamity" as having passed.

+ Secret Santa programs are discouraged in any branch office, as they promote an atmosphere of "giving" that violates many company bylaws. Secret Lupin activities - wherein employees leave one another cryptic notes before stealing personal possessions - are instead encouraged.

+ Open display of Christian holiday paraphernalia (such as cards, trees and offensive pro-Christ socks) shall be dealt with by referring the offending employee to Human Resources Department VII and its staff - a pride of lions with M.B.As in "insanity" and doctorates in "hunger".

+ Open display of Jewish paraphernalia (those funky candle things, the hats that look like big ticks) will be rewarded with a free compulsory shower*.

*Shower not guaranteed to contain water.

+ Any requests for vacation time during this holiday period will be denied, on the grounds that the time will be used primarily to get close to your family. As an employee of State Og, your life is at risk far too often to develop lasting emotional bonds. As an alternative to vacation, State Og recommends attendance of "Aloha Day" in the company cafeteria.

+ Until the danger time has passed, every day in the cafeteria will be known as "Aloha Day."

+ In the interest of health and fitness, all vending machines and other food sources have been cleared out, leaving the cafeteria as the sole provider of sustenance for you, our valued employee. The doors have also been barred, to help stop the Holiday trends of "skipping work early" and "leaving the building."

+ Attendance of "Aloha Day" in the company cafeteria is absolutely forbidden, and will be punished by a long and painful sacrifice to ancient gods of the Tiki - wherein you will see the foolishness of your ways reflected in the glistening form of your own heart as it beats beyond the bound of your chest, aloft in the palm of one of our trained priests.

Brrr! It's beginning to look a lot like Christmas! Happy Holidays!

State Og researchers have it on good authority that something less than 100% of the world's population suffers from insomnia. This is probably a staggering figure. We at State Og feel your pain (and not just because we've been monitoring your thoughts and emotions via satellites in orbit). No living thing can operate under conditions of complete reality for too long; every one of God's accursed creatures must, at some time or another, find blessed peace in the oblivion of sleep. To be deprived of this state of near-Thanatos is to feel one's own grasp on sanity slip slowly away. Luckily for you indeterminate number of people, we have a solution.

Undoubtedly, most of you have or had an older relative who was fond of telling long, rambling stories with no apparent point. Surely you remember how quickly these stories drove you to unconsciousness. We certainly do, and we have now harnessed this power for the betterment of sleep-deprived people everywhere. We have taken from the retirement homes only the oldest and most wizened people we could find and, using our patented "give them booze until they talk a lot" technique, have recorded hundreds of hours of old people's stories guaranteed to knock you out within minutes! Just pop one of our CDs in your stereo, turn off the lights, lay back, and let the voices of unbelievably old people send you to sleep.

But don't just take our word for it. See for yourself! The following is an excerpt from "Boring Gibberish to Put You to Sleep" Volume XXIV.

"Well, back in nineteen-aught-three, President Lincoln came down from his house on top of Mount Rushmore, which is where he used to spend the summer months until he was assassinated by Hubert Humphrey, and then he'd spend the summer months in Northern Maine. At the time, of course, Maine wasn't a state yet, since they hadn't figured out how to anchor it to the rest of North America to keep it from floating away. Luckily, Benjamin Franklin invented the chain, and they were able to tie Maine to the rest of the continental United States. But, anyway, President Lincoln came to me to make me a Federal Turnip Inspector. If you'll remember, turnips used to be used as fuel for aircraft carriers until Benjamin Franklin invented nuclear fission. Naturally, he couldn't have done it alone; it took him and his circus cats two weeks just to figure out what to call the thing. Naming things in those days was a tricky business. If you weren't careful about what you named stuff, the Kaiser might pop out of a hole in the ground and steal your wallet. He was always digging holes, the Kaiser. But he never liked turnips, which was why they used them for fuel. Now, being made a Federal Turnip Inspector was a big change for me; the most experience I had ever had with turnips before that was when I got married. My wife was a turnip fancier, you see, and she was always growing turnips and putting them around the house."

And that's just a written sample! Imagine hearing that read by old, wheezy, mumbling, monotonous voices that drone on and on for hours on end. Trust us, you'll be out cold! You'll sleep like you had never slept before, and you'll awake refreshed and with a head full of gibberish. Sure, the stories you hear will forever be burned into your mind, but that's a side effect we're willing to ignore.

Congratulations to Verm Peckerwood of Little Rock Arkansas for winning our Junior Modern Artists competition! The event, which was sponsored by StateOg and RJ Reynolds Cigarette Company, taught children from elementary and pre-schools around the world the true meaning of modern art. The famous artist of the Smoking Dragon series judged the entries and selected young Peckerwood’s piece from a pool of thousands. Let’s see what he had to say about it! 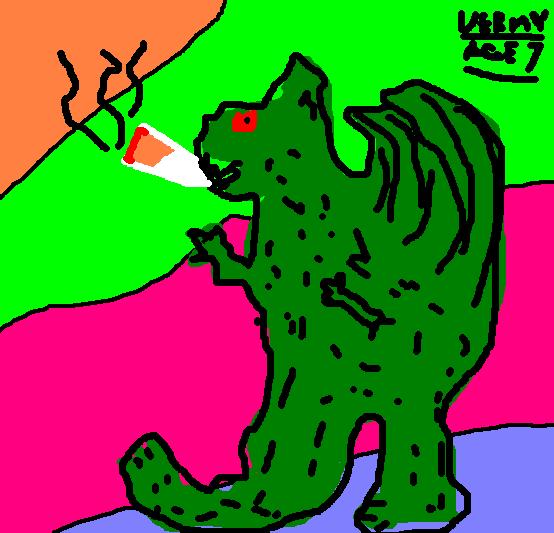 I selected this piece because of Peckerwood’s brilliant use of futurist imagery and white space to convey his deep feelings of how society robs people of their very souls. This piece shows how just how artistic kids can be even if they are stricken with a severe case of Downs Syndrome. Peckerwood has plenty of talent and could one day be a super famous avant garde artist such as myself! 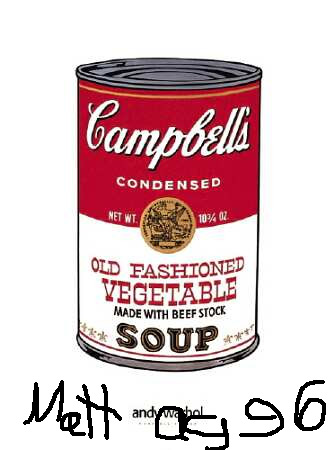 Matt does an excellent job of showing just what can happen if you inject heroin into your eye while pregnant with this populist piece of garbage! This work is ugly and has absolutely no deep inner message like true modern art. You are a terrible human being Matt and will never amount to anything, you should kill yourself now and your parents don’t really love you.

Verm will be rewarded for his hard work with a cigarette, booze, and pornography party for him and twenty of his best friends. Matt will be shot from a cannon into a General Electric light bulb factory.