Some cliches you can't escape, no matter how hard you try. World War II, terrorists, alien invasions. Day of Defeat and Counter-Strike brought the first two to Sierra's popular first-person shooter Half-Life. Now, the third has come at last. 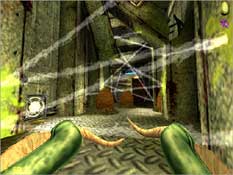 A Fade alien lays down strands of web to slow the progress of the Terran Starways Authority marines.

Natural Selection seems an interesting concept at first. The space marines of the Terran Starways Association have been plumbing the depths of space for centuries, surviving only with the aid of nanomachines. But they have finally encountered a threat in the Khalat aliens: buglike, a hive mind, and out to assimilate all in its path. If this sounds like the plot of StarCraft to you, you're not alone. Every single alien in Natural Selection is a thinly-veiled clone of a Zerg breed. Fades are Mutalisks, Lurks are Ultralisks, and Unos are Zerglings. I'm surprised Valve hasn't been sued by Blizzard for this blatant an idea theft.

But even if the idea is incredibly unoriginal, how well does it play? Fairly well, surprisingly enough... at first. Each side begins simply with a hive or command chair (depending if you're Khalat or Terran, respectively) and a resource tower close by. The Khalat need to build new hives and structures with the aid of a Gorger Khalat to gain new abilities (such as cloaking, regeneration, and "hive sight") and assume new, more powerful forums such as the acid-shooting Skulker, the spike-throwing Fade, and the living juggernaut that is the Lurk. Marines get new equipment like missile launchers, power armor, jetpacks, and the like... if the commander builds the appropriate structures to obtain them.

This leads to biggest flaw for the Terrans, however. A single person, the commander, can make or break the game. The Terran commander is in charge of building, deploying and upgrading weapons, and moving the lesser Terrans around as he sees fit. To him, it plays like... you guessed it... StarCraft! Blizzard, are you taking notes?

In a classic example of overcompensation, the game balance has been tilted far in favor of the Marines. "Siege guns," a heavily damaging form of turret, can be built anywhere there is a turret factory, and blast out of existence any Khalat foolish enough to be in its path. Factor in the ability for the siege guns to shoot through walls, and the Khalat can only survive if they "Zerg rush" the Terrans. Do I really need to tell you what that's from? 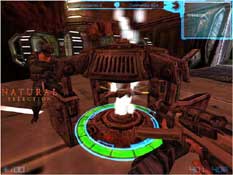 A Marine frantically works to repair a movement tower.

Despite flawed gameplay, the graphics are impressive. Valve has clearly put large amounts of work into making the venerable Quake I engine look totally different for this new flavor of Half-Life. The resource towers and defense chambers are blatantly alien, standing in stark contrast to the movement towers and arms labs of the Terran marines. Even the shadowy figures of the unbuilt hives lend a faint aura of the unearthly to this game's visuals.

Unfortunately, that's where the quality ends. Every session of Natural Selection plays almost exactly the same, with minor deviations at best: aliens rush in a futile attempt to win, marines repel, marine commander builds siege guns near alien hive spots, marines win. I would hope the next server patch balances this game more towards the aliens, perhaps by removing the ability of the siege guns to target anything.

The sound effects were music to my ears, if by "music," you mean "a screeching cacophony not unlike Yoko Ono's songs." My foray into the aliens left me hearing badly ripped StarCraft sounds, and the mechanical "build structure waypoint" of the marines was not much better. I would hope for some sort of background music to perhaps wash out the sheer badness of the sound effects - unfortunately, there was none to be found.

It's impossible to explain why this game was released: by all rights, it should have been destroyed before Valve released it on an unsuspecting community of Half-Life players. While they have it available for a free download, you need to own a copy of Half-Life in order to play it. Overall, I can't think of a reason that'll convince you to. If you defy my advice and download Natural Selection, expect to spend several hours looking back on your brief session and asking yourself, "Why did I think that was fun?"