Iowa starts out as a promising album, with the hard-hitting (515). However, a very strange songwriting choice was made here, as (515) has the line "People = Shit" in it several times, while the next song, which is TITLED “People = Shit”, only has the line once. This kind of sloppy musicianship is part of the reason why Slipknot's popularity has been declining in recent months.

From this point on in the album, you get the feeling that the band just didn't care about the album or the fans who would have to suffer through it. The tracks are very short (around 2:30 on average, and the longest track is a mere 3:27) and the group sounds like they're trying to get through each song as fast as they can so they can go home. This kind of apathy even comes through in the lyrics at a few points, like this sample from "Everything Ends":

You are wrong, fucked, and overrated
I think I'm gonna be sick and it's your fault
I haven't slept since I woke up
I didn't get enough sleep and now I'm fucked up

In fact, one might say the lyrics are the weakest part of this album. In their first two albums, Slipknot and Eyeless, Slipknot's lyrics always represented their inner rage and disdain for popular culture and humanity in general. Iowa’s lyrics are much tamer and, while I hate to call bands 'sellouts', they do seem to be adopting all the same principles that they once stood against. They frequently attempt to promote meaningful messages in their music, only to end up with garbled, nonsensical lines that confuse the listener, such as in this example from The Shape:

Gently, my mind escapes into the taxing
world of pleasure, a pleasure that'll take
my mind off the mortality of my life,
my past life... lives as I know it now.
And whatever may come, it slowly
reappears to somewhere in the back
of my mind. It will remain there,
until I wish to believe it. 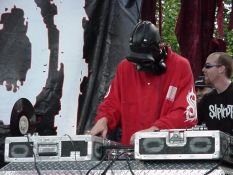 Slipknot's backup vocalist, James Corey, sets up his equipment for their concert.In contrast to the sub-average lyrics on this album are the excellent vocals by lead vocalist Ross Robertson. He has managed to curb the gutteral growl he used earlier, and he now croons over the guitar riffs with a voice rivaling any best-selling pop band. The gentle, harmonic New Abortion allows him to demonstrate his singing talent with the only good lyrics on the album, which appear to be words of apology for an ex-loved one.

Unfortunately the best vocals in the world can't compensate for badly-played music, and ol' Rossie isn’t quite able to pull the album out of the gutter. The riffs are played too slowly by amateur guitarists who don't sound like they quite know what they're doing. In certain tracks you can distinctly hear a few guitars that sound flat by at least half a note, and they frequently stumble over each other, producing unpleasant-sounding 2nd and 7th intervals. It isn't easy to get a nine-member band in tune, but they clearly didn't even try, showing once again a lack of concern for their fans. The guitars also tend to drown out the lead singer, possibly due to the fact that out of the seven members of the band, each of which has an alias numbering from 1 to 7, numbers 3-7 are equipped with bass guitars.

It's clear that Slipknot had their peak album a couple of years ago, and this album is a sad tribute to their declining music and crumbling fanbase. The closing track, Wait and Bleed, has this to say:

Please be mine, please always be mine
I can compensate you
All I want is to love you all
I belong to you
I will want you to love you.

I could go through several other instances in which the lyrics make absolutely no sense, but there really isn't any point.

Slipknot started out with high hopes. Their frantic thrashing energy captivated fans back in 1997 when Slipknot was released. Tragically, rather than follow up on that success with a similar album that would satisfy the fans, they chose to create a milder, safer album that would increase their sales and billboard standings. They claimed to fight against greedy corporations who care only for money, and now they have shown their true colors and revealed that they too exist solely to profit from gullible audiences. People who felt akin to Slipknot, not because of their music but because of what they stood for, have been betrayed. The band may still tour and release albums, but their ideals and significance are dead. Slipknot, RIP.