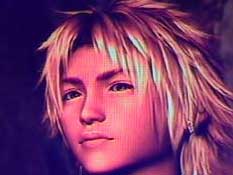 Rikku, the Al-Bhed girl is one of the game's main characters.

Japanese kids hate their fathers. It's no secret. From new age Evangelion's wimpy hero Ikari Shinji to old-but-gold Robotech Rick Hunter, the heroes have always emerged as whiny self-absorbed flakes who want nothing more in life than to beat up their old man. FFX's Tidus is no exception.

Tidus's story begins in the Zanarkand, the capital of Spiral. Like his father before him, he is a young Summoner-mage. He also happens to be an ace Blitzball player on the side. He has it all: fame, fortune, and a ready supply of chicks. Unfortunately, his hometown is destroyed by Sin one long cut-scene after the opening credits. Tidus only survives through the intervention of his foster-father Aaron, who thrusts Tidus through a magic portal a thousand miles away, to the island of Besaid.

There Tidus vows revenge against Sin and joins with a local girl, Yuna, to gather mystical beings of might and magic known as the Aeons in hopes of exacting said revenge. In the process, they are joined by a motley crew; of which three stand out.

Rikku, a member of the technologically-advanced Al-Bhed nation. Like that kid in A.I, she is a cyborg in human skin. She has high magic skills with natural things but is not good with robots or machinery.

Wakka, the comic relief of the party. Big, buff and tough, he is is captain of the Besaid Aurochs and the co-captain of Tidus's boat, if you know what I mean ^_^ . His weapon is a giant sword which he swings mightily to cut down his opponents.

Lool, Yuna's older sister. She was engaged to Wakka's younger brother, Chappu before he became lost as sea. Lool has a pet ghost who kills things for her but the ghost isn't very strong so be ready for Lool to die a lot.

With them and Aaron, Tidus happily bumbles his way around the world of Spiral, killing random monsters and winning random treasures in the process. Midway through the game, though, Tidus and Co. learn a shocking truth.

It turns out that ten years prior to the opening of FFX, the three legendary heroes - Bruce, Jack and Aaron - led a charge against a world-destroying monster known as Sin. However, one of their number, Jack, betrayed his friends, joining with Sin to rule Spiral. Even with the might of the Final Aeon, Bruce and Aaron were unable to defeat the unholy anaglamation of Jack-Sin. The beast was only halted. Aaron, though, was crippled in the left hand, and Bruce lost his life in the process.

And Jack was Tidus' father.

Now it all makes sense! 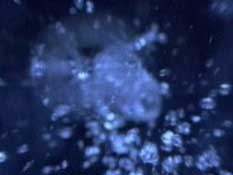 Water is very powerful in the world of Spiral and there are even monsters made out of water that can kill you.

With that knowledge, the final confrontation is made all the more emotional. However, we never find out one thing: what made Sin attack Zanarkand in the first place? With this glaring plot oversight, the story loses all sense of dramatic pathos it spends thirty-odd real-time hours trying to build up. The romance sub-plot is also built up tremendously with little reward at the end. Rikku and Wakka do not marry as the game would lead the player to believe might happen.

Story aside, the actual gameplay and graphics are nothing short of breathtaking, easily surpassing the Dreamcast's Dead Or Alive 2, and the Gamecube's Super Smash Brothers Melee. The sights of Sin destroying Zanarkand and Yuna dancing for Tidus will stay with me for a long time. The monsters are also well-animated and some of them even converse with the players during battle!

Combat has shades of Street Fighter, as attacking enemies builds up your Overdrive (read: Super) Meter. When the Meter maxes out, the character automatically performs his/her ultimate attack, which could range from something as sneaky as pickpocketing all opponents or instantly killing a monster. To top it off, some characters can learn new Overdrives by accomplishing certain side-quests. The best overdrive attack is possessed by Rikku who can steal life away from enemies like a thief would steal treasure. She also has the ability to cast an "Instant Death" spell on enemies, killing them instantly.

Music is a mixed bag. The "Hymn of the Fayth" score impresses as do the songs "Otherworld" and "Eyes On Me." The main love theme, "Sutekidane", is an especially wonderful treat. On the negative side, the same battle music is used throughout the game, and the Zanarkand Dome score is tinny to the point of cheese. Crashes of lightning strike drown out the ambient music of the Thunder Plains. The composer of this music is the same composer who wrote the music for the NASCAR games, and the heart-stopping action and suspense comes through loud and clear.

It is obvious Square has pulled out all the stops for this game, including DVD-ROM format, character designs by Yoshitaka Amano of Evangelion fame, even secret mini-games such as "Chocobo Racer X" and "Blitzball Cup X." The Blitzball game is extremely easy so unless you are very bored don't bother playing because you win every time. It is a good and very fast way to gain experience, however.

The sum of the parts in FFX was greater than the sum of the whole. After the critical successes of FFVII's Cloud Stryfe and FFIX's Cidane Tribal, the Tidus Shin-helmed FFX simply falls flat. It is a shame that Square is not making any more Final Fantasy games because this game has potential, but to a certain extent it is probably all for the best that they stop while they're behind.