By now we all know who Eminem is. We've purchased his albums, adored his amazing lyricism, and admired him for remaining true to the hard streets of Detroit that he grew up on. Some may say imitation is the sincerest form of flattery - if this is the case, then Eminem should be swept off his feet by the Insane Clown Posse. Hoping to ride on the crest of Eminem's mainstream success, two brothers from the suburbs of Detroit are slowly making waves in the "underground" music scene. Joseph and Bruce Utsler grew up in the well-to-do suburbs of Detroit, and shortly after their graduation from High School, formed a garage KISS cover band known as the "Inner City Players," or ICP. Unfortunately, they were competing for gigs with an up-and-coming Kid Rock... and failing miserably along the way. Broke and brokenhearted, the heart and soul of the Inner City Players, Bruce Utsler, attempted suicide and was admitted to a psychiatric hospital in 1997.

Later that year, an amazing new star began to rise in Detroit. Marshall Mathers, hardened from years on the tough streets of downtown Detroit, started making headlines with a totally new brand of music - white rap. "Eminem" as he would come to be called, began playing to sold out clubs and small venues and the Utsler brothers began to take notice. In late 1997, they completely reinvented their image, changing from the face-painted hard rockers of the Inner City Players to the face-painted, hard rappers of the Insane Clown Possee. They came out with their first compact disc release "Riddle Box" a mere two months after their sudden identity change. Unfortunately it was a commercial and critical flop. The album is perhaps best characterized by the single "Killing Fields", in which the Utsler brothers attempt to make a correlation between the Killing Fields of the Vietnam War and the Killing Fields of downtown Detroit. I'm sorry guys, but political activism went out with the 80's; go back to listening to and stealing ideas from John Lennon.

The Insane Clown Posse was able to generate a bit of buzz with their next two releases, "The Jackal Brothers" (a concept album of sorts, detailing their bond as brothers) and "The Great Milinko." However, they shadowed Eminem each step of the way, hoping to be the first from Detroit with a major record deal. That hope was crushed when Dr. Dre discovered Eminem at a sold-out show at Detroit's State Theater and immediately signed him to a massive contract. The ICP was once again one step behind... and now very angry. They had been opening up for Eminem for years and they believed that they deserved a break, never realizing that all along it was their utter lack of originality and willingness to copy every other popular white rapper that was precluding them from ever being a top draw.

Flash forward a few years and Eminem (as well as his earlier musical influence, Kid Rock) is topping the charts worldwide, but ICP remains a local Detroit act. Millions of fans flock to Eminem's shows to witness his lively, impassioned message and live performance. At the same time, handfuls of ICP fans (affectionately referred to as Juggulors) pack bars and Knights of Columbus halls around Detroit and Lansing, Michigan (their new home) and are treated to a halfhearted shows which consists of the Utsler Brothers (stage names "Violent J" and "Shag Dope") jumping around and spraying Fanta Cola on a mostly disinterested audience. So what went wrong? 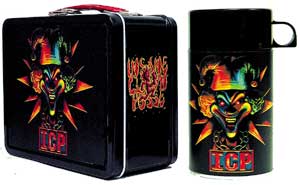 Aside from the aforementioned blatant plagiarism of style from Eminem, Insane Clown Posse tries in vain to write all their music for mainstream fans. Whereas Eminem takes a stance of antiestablishmentism, ICP are more than happy to attempt whatever it takes to get on the radio, make more fans, and thereby make more money. This is clearly detailed in the single "Radio Stars" from their recently released "Bizarre." For reasons unknown, ICP decided to include clips from earlier albums including "Hot Buttered Bread", "Joey fell in love", and the song "Girl", which contains such insipid lyrics as:

After hearing such trite clichés, you will want to take the CD out of the stereo, break it in two, and place both pieces on opposite ends of your apartment - in hope that they never reattach (I know I did!). Hey, ICP: Boyz II Men did the same thing you do, but they did it better... best try again! Or, wait - DON'T! Also, please try and hire somebody to produce your "music," as downloading beats off of the Internet and looping them over and over again is not the surest way to success.

Do yourself a favor: don't bother with the Insane Clown Possee. The 80 bucks or so that it would take for you to join the 200-odd people who have purchased all of their albums is better spent on tickets to see Eminem in concert. Once you've seen, experienced, and felt the original style of Eminem, there's really no need to listen to the cheap knockoffs that he inspired. ICP was spawned and will likely stay exactly where they belong, stuck in the hellhole of Detroit. I had never heard of them before today, but after researching them for a good 3 hours I can say one thing: Detroit and ICP deserve each other! I think that Eminem must have been talking about ICP when he penned the lyrics:

"I'm Slim Shady, yes I'm the real Shady. All you other Slim Shadys are just imitating. So won't the real Slim Shady please stand up?"

Woah, not so fast there, Insane Clown Possee. Sit back down.