The Great American Reach Around Begins

This article is part of the The Great American Reach Around series.

Alright everybody, I have a triple major announcement to make! This is going to get all your turds falling up out of your face in a crazy jumble!

Are you ready to feel this sucker blow up your birthday like a fire cake? 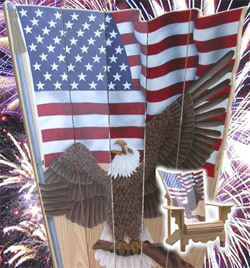 Like all true Americans I like to relax on my red, white and blue deck in my American Bald Eagle deck chair.Okay, maybe it seems like a pretty straightforward statement. It's the sort of simple declaration a pie might make if it could talk and it wanted to get across to you that it was a self-aware pie. Not everyone hears that sort of statement with the same ears. If a pie says "look mate, I'm a pie" some folks might just accept that on its face. A lot of people won't and they might wonder what sort of pie it is, why it's talking, and how they can kill it.

Why do the pie's words inspire one person to want to eat slice after slice of screaming apple pie when another wants to buy that apple pie a velveteen pie skirt? People have preconceptions about pie and those preconceptions color their opinion of whatever the pie might say. Maybe they hate pies because they had a bad breakup with a strawberry rhubarb pie or they ran a business where a pecan chocolate bourbon pie embezzled. Maybe their father was a key lime pie and they watched him slowly die of crust cancer in the hospital. Their past experience with pie makes all the difference.

Saying, "I'm an American", means very little to other Americans. By stating my citizenship I'm just affirming that I'm not crazy and/or some sort of filthy hyper-communist alien. After all, "American" is just another word for "humans" to most Americans.

According to a Pew Survey conducted last summer, most of the rest of the world is not going to react well to my declaration of American citizenship. The world does not like America very much right now and the dislike of a country tends to translate into a dislike for that country's people. What is my nation but a collection of millions of people scurrying around like ants at a picnic on the surface of the giant geologic cinnamon roll that is America? It's not the cinnamon roll's fault that the picnic is ruined, so you've got to blame the ants.

The world is not enough...we need frigging Mars to hate America!
Even a casual glance at the survey numbers in that Pew study makes me want to poop and pee myself like a terrified frog in the mouth of a pelican. We're loathed! Every nation other than Great Britain and India (which is like an impoverished Great Britain covered in cardamom and curry powder) hates the United States. Even these two are starting to feel a bit like battered spouses. We take them out often enough, but we always get too much devil rum in us and end up throwing Franklin Mint collectible plates at them when we get home.

Some of those numbers are particularly baffling. For instance, America has a 43% approval rating in Russia and a 23% with Spain. I remember how we spent 50 years on the brink of destroying all of human civilization because America and Russia hated each other so much, but what did the United States do to Spain? There was that train bombing thing, but guys, that attack was not literally Americans bombing you. We don't want Spain to blow up. Heck, even Pakistan likes us more than you guys do and America is literally bombing parts of Pakistan right now in the hopes that they will blow up.

Another figure that sticks in my craw is that only 39% of French people like the United States. I hate to bring out that tired old "saved your asses in World War II" line, and I know that imbroglio happened a long time ago, but a lot of those people who saved your asses are still alive. Granted, Americans have said really stupid and mean things about you guys in the past few years, but you've got to weigh them out. One hand, freedom fries, the other hand, Normandy landing. I'll believe we deserve that approval rating when I see photos of Eichmann smothered in poutine.

The most precipitous fall in the favorable ratings comes from Indonesia, who loved us in 2000 and now thinks we're the scum of the earth. That's after we rushed aid to them in the aftermath of that horrible tsunami. Let that sink in for a second. Whatever we are doing, it's pissing them off so bad that rushing the US Navy, food and monetary aid to their country caused us to become less popular. To inject an American metaphor, that's like hitting a home run in a baseball game and then the umpire runs over you with his Buick.

Ah, I can't believe myself! It's instinctual, but arguing like that is the wrong way to tackle this problem. When you challenge someone head on you force them to defend their beliefs. Even an opinion that is only tenuously held can suddenly become intractable in the face of opposition. Make no mistake though, something has to be done.

I can influence my government with my lonesome vote and I can try to become an informed citizen of the world. That's a good start and those are things every individual American can do to change our image on the world stage. To actually change people's minds requires an entirely different approach.

We have to make them understand us. That is the mission of the Great American Reach Around. Saving the world!

Roughly a quarter of Something Awful's audience hails from outside North America. Thousands of Europeans, South Americans, Australians, Africans and Asians are potentially reading this article. 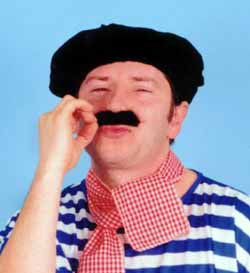 The face of France? Perhaps we will learn differently!Because of this audience and because of the potential for an even greater global audience I am declaring this spring to be the Great American Reach Around. For the next three months I will be America's ambassador to the Internet nerd world. Just as a baker explains why his pie is delicious and why the fact that it talks does not make it inherently evil, I will seek to explain this crusty sweet of the United States to the world.

For those of you who have decided that you dislike America, I implore you to approach the Great American Reach Around with an open mind. Read the articles about America in the coming months in the same way you might read dispatches from a war zone. I'm just your everyman pouring out his soul, stunned by the grisly horrors of war, or in this case northern Indiana.

Americans, take heart, this is a very large country full of natural and unnatural splendors, interesting people, and strange history, so you might just learn something you didn't know about our proud land. This will also be an opportunity to learn more about the world. I have asked writers from all over this weird planet of ours to contribute mini-articles telling us about their nook of the earth.

The Great American Reach Around will be appearing every Friday (give or take on here and there) with a new topic about the United States and a new representative from a foreign country. This will continue for three months or until world peace has been achieved; whichever comes first.

If you are a foreigner with any questions about the United States or anything you would like to know, feel free to email me and I will do my best to address them in an upcoming article. Above all, remember that I love you deeply.

Next week, the Great American Reach Around will bring you an insider's look at America's heartland, the Midwest, where men are men and women are a slightly longer and softer type of man. You will also get a glimpse at life in France through the potentially inscrutable eyes of a Frenchman or two. How does it stack up to the domestic bliss of American suburbia? Find out next week!