Black Desert Online is a Korean MMO with a cash shop for pretty virtual outfits. Chess is the world's most popular strategy game, played with a physical board and pieces. But the similarities end there.

So which game should you buy? Let's compare the two. 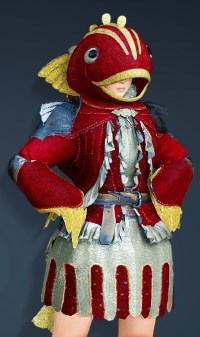 Chess has no story to speak of.

Black Desert Online has a fantasy kingdom fighting evil, and there's this inky black cloud demon guy that tells you to do things for a while, and I guess there's heroes on an epic quest? I'm pretty sure I remember something about a prophecy.

Chess provides no means of tweaking your characters' appearance.

Black Desert Online allows players to move every muscle in their characters' faces, one millimeter at a time, until they look precisely like lolicon Ted Cruz.

Chess is played on an eight by eight grid, providing a total of only 64 spots to stand on. Seems pretty limiting, right? It gets worse. Pieces have limitations on how they move, and some can never step foot on a tile that's differently colored than the one they started on.

Black Desert Online has five regions, including many fields and dungeons. You can stand anywhere you like with total 3D freedom!

Chess only allows players to bump one piece into another with little fanfare.

Black Desert Online has a plethora of deadly weapons, real time combat, and pulse-pounding skills such as Valkyrie Slash and Bloody Calamity.

There are only six enemies in chess: Pawns, knights, bishops, rooks, the Queen, and the King.

Black Desert Online, on the other hand, features more than a hundred monsters, from rats to goblins.

Chess has been around for roughly a thousand years.

Black Desert Online was just released in the US this year, and it's being patched on a regular basis.

Chess must be played in the park, in a tournament, or within the dusty confines of a chess depot.

FINAL VERDICT: Black Desert Online is a better game than chess by every conceivable measure.

Dark Souls 3
If we use the industry-standard metric of comparing games to The Rentals albums, Dark Souls 1 + 2 are Return of the Rentals and Seven More Minutes, and Dark Souls 3 is mostly nice but sort of broken and needlessly restrictive about viable builds. 8/10

Black Desert Online
I hear it's even better than chess, if you can imagine that. 7/10

Enter The Gungeon
Everything's a gun or a bullet, yet I can't play the dang thing with my Super Scope. 7/10

Tom Clancy's The Division
What's the point of shooting all these men if none of them will drop Aiden Pearce's Iconic Cap? 5/10

Quantum Break
Use your amazing power to stop time and redirect all of Quantum Break's development resources into more episodes of the in-game tv show Night Springs. 4/10