The Weirdest Mods Of All Time

The Weirdest Mods Of All Time 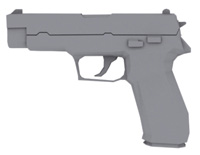 Most mods start off as an ambitious idea by one technically incompetent person hoping to trick other people into doing all the work for him so he can get a job in the industry as a lead designer. Many of these projects fall apart shortly after slapping a picture of an untextured render of a handgun onto their website. Of those that remain, a select few go on to become legendary achievements such as Team Fortress, Threewave Capture The Flag and (for better or worse) Counter Strike.

The following mods are not legendary.

If anything, they are legendary in their uselessness. They have withstood the test of time not because of their quality, but because instead of being abandoned as they should have been, they somehow cleared the "rendered guns" stage and were actually released.

Mechwarrior 3 Nude Patch
This saucy mod does away with the armor plating on every mech in the game, exposing their wiring and bare steel frame for every lecherous gamer to salivate over.

All Resource Collection Mod For Command & Conquer: Red Alert
This mod removes the annoying combat and strategy from C&C: Red Alert and leaves us with the essence of RTS fun: resource collecting. Tanks and infantry are out, cargo trucks and guys with shovels are in.

Serious Sam Realism Mod
In an effort to bring the proper level of realism to Serious Sam, this mod makes the following changes:

Sims 2 Simlish-To-Klingon
Tired of the nonsensical babbling that passes for your Sims' language? Want to know what your neighbor's 16 year old daughter is talking about when that "criminal behind bars" speech balloon pops up? With this mod, the indecipherable mess of Simlish is magically transformed into the universally accepted Klingon language.

Max Payne Baby-Time
Being able to slow down the gunplay with bullet time in Max Payne was incredibly cool. What could possibly be cooler? Slowing down the nightmare level where you traverse a puzzle of floating blood as the soothing sound of a baby crying encourages you. With this mod, time is slowed by 600% while in the blood puzzle level to prolong your enjoyment. Activating bullet time slows the action by an additional 400% and cranks up the volume of the baby's cries by 300%. 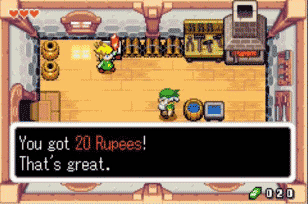 Game: The Legend Of Zelda: The Minish Cap
Submitted by: Yaos

Virtua Tennis 3
This inventive and surreal reworking of Pong may not be as immediately accessible as the 1972 classic, but if you stick with it you will be rewarded. 8/10

TMNT
Teenage Mutant Ninja Turtles: Secret of the "ooh, this could have used better camera angles and a few more attacks". 6/10

Earth Defense Force 2017
Three million giant ants getting blasted by rocket launchers as UFOs are shot down on top of them can't be wrong. 8/10

Armored Core 4
Every game that features giant mechs has them fighting at one point or another, so I hope the leaders of the future take note and avoid bloodshed by foregoing giant mechs in favor of ultra enormous mechs. 8/10

College Hoops 2k7
Now that your favorite team is probably out of the NCAA tournament, catch the fever and play this game, whee! 7/10

Kororinpa: Marble Mania
If you have marble madn... mania, the only cure is to take two of this game since it's so short and unrewarding by itself. 6/10

S.T.A.L.K.E.R.: Shadow Of Chernobyl
This game will make you hate dogs for the rest of your life, even more than you already do. 9/10

Titan Quest: Immortal Throne
An exciting and lengthy new continent to battle your way through, or to take a leisurely stroll through if you play the Oracle or Soothsayer class. 8/10

Alien Shooter: Vengeance
Nowhere near as bad as the name implies, but that isn't much of an accomplishment. 6/10

Tortuga - Two Treasures
The pirate game so bad that even software pirates will feel ripped off. 3/10

GTI Racer
Finally, a Volkswagen racing game that manages to capture all the exhilaration that the brand has to offer. 4/10

Puzzle Quest: Challenge Of The Warlords
Combining a puzzler with an rpg was a stroke of genius, but adding peanut butter to the game's ogres didn't really pay off for the developers in quite the same way. 8/10

Call Of Duty: Roads To Victory
The PSP: making console versions of bland series look amazing by comparison since 2005. 6/10

Custom Robo Arena
Admirably serves as a surrogate for the cockfighting game we have all been longing for. 8/10