When Dragon Age: Origins, the most old school PC RPG-ish RPG in years, sold more copies than Mass Effect 2, it was an encouraging sign. After all, if a game with counter-spells, trap disabling, and +1 rings could succeed to such a degree in the current market, my life might have some meaning. 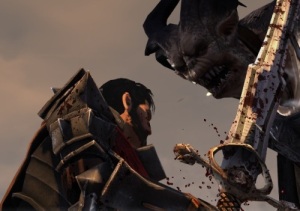 With the follow-up, BioWare had a chance to refine the original's few weak spots and bring the rewarding complexities of a PC RPG to a larger audience which was clearly capable of following along. Instead, they rushed development to get dollars sooner and decided to "streamline" just about every element.

If you aren't familiar with BioWare, their definition of streamlining is "attempting to combine several nuanced things in a very simplistic way that any idiot can understand, without doing any of those things very well".

Dragon Age II spreads itself thin while trying to please everyone in the most calculated and ugly ways possible. It is short and repetitive and all sorts of dumb, and occasionally competent and even inspired in spite of itself. The game swings between weirdly bland and weirdly entertaining like nothing else, even if the latter doesn't happen enough.

I like the idea of a relatively restrained RPG. In my opinion, Mass Effect should have been entirely about upholding space laws, solving crimes, and eventually taking down criminal nemesis along the lines of Moriarty. No saving the world/universe. Just a lot of detail and character.

For most of Dragon Age II, you are simply a dude stabbing people in a big city. There isn't a terrible threat to mankind driving the story. There are only local problems to be solved, old acquaintances and enemies to hint at your past, and a surprising number of thugs that transform into glittering piles of treasure ten seconds after death.

It occurs to me that you could discover the weight of a human soul by weighing the body just before death, waiting for the corpse to fade, then weighing the remaining bones and loot and calculating the difference. Unfortunately, I am going to grab that sweet berserker helm every time so you'll never get an accurate reading.

The opening of the game states that you're a hero destined to save the world. This completely undercuts the game's laid back progression, planting the seed in your head that you have an appointment with World Threat #295. That single move trivializes every low key quest to some extent.

Even if the game hadn't told you about your GLORIOUS DESTINY, the story lacks focus. Rather than exploring with purpose as you go from one story arc to the next, you meander because you need some more experience and your journal reminds you there are a billion arrows to move towards.

In an effort to make the combat more satisfying on consoles, a greater emphasis has been placed on quick default attacks. On the PC your character autoattacks. Console players, however spam the same button again and again. It's all the busy work of an action game with none of the depth, since there is no block, dodge, or even the ability to hold the attack then release it for more damage.

You don't get to use special abilities often, since they either have extraordinarily long cooldowns or use a large amount of mana/stamina, which runs out far too quickly and regenerates at the speed of my social life. As a result, fights generally devolve into autoattack snoozefests punctuated by occasional abilities.

Worst of all, the strategic battles in Dragon Age: Origins are gone. Instead of spotting a group of bad guys and surveying their classes and environmental positioning before forming a battle plan, you now come across small groups of low-health trash mobs standing in cramped hallways, kill them, then face seemingly endless swarms of magically appearing replacements.

Just about every single fight plays out like this. Positioning your own party is pointless since the first wave of enemies dies so quickly and the next wave swarms in from every possible direction. It's like playing chess with someone that swipes the pieces off the board every turn.

Melee combat has a much nicer feel to it. Hawke will always close the last few feet between himself and the enemy with a satisfying jump attack. You get more genuinely interesting abilities to play with this time around, from teleporting backstabs to enemy-attracting dummies that explode to charging tackles that knock crowds of dudes on their butts. It would be nice if you could use these more often.

The combat animations and effects are so profoundly stupid and over the top that there are occasional moments of brilliance.

I was fighting a swarm of bad dudes in a secret passage that was identical to another secret passage I had discovered earlier. Perhaps the architect figured he could get away with that. They are secret, after all. What were the chances of a customer discovering his sloppiness?

Anyway, guys were being gutted left and right. Blood was flying everywhere, people were screaming, backflipping, exploding, etc. The last guy, a mage with a tiny sliver of life left, cast a magic barrier around himself. My party quietly gathered around him as he hovered in his protective bubble. After ten or so seconds, the barrier disappeared. My hypersexualized pirate rogue lady nudged the mage with her foot. This was the weakest looking kick ever, like someone gently shooing a puppy. The guy burst like a garbage bag full of pimples and flames.

This time around, the game actually implements an art design. When the lighting is at its best, it casts stark shadows across characters in a striking way, giving them stylistic appearances that are reminiscent of cel shading while retaining a nice level of detail.

There seem to be more pieces of armor for your character with distinct appearances, something BioWare has skimped out on in almost every game they've made. Some of the preorder bullshit looks like something a Final Fantasy artist would mod into Oblivion, but most of Hawke's gear in the main game looks really nice.

When the lighting isn't at its best, everyone just looks sort of weird. Not terrible, just uncomfortably between real and cartoony. You know, like anyone on the current season of Celebrity Apprentice.

There is no variety in your party members' armor, and less variety in the game's environments. Each area is seemingly made up of buildings that are identical save for the occasional locked door, pile of rubble blocking the way, or kindly corpse with a delicious health potion tucked into his skull.

As in all of BioWare games, most of the quests show creative flairs or are at least bookended by conversations that make them feel unique. Killing an ambusher will uncover a note which leads to a hidden location, which contains an empty chest, which makes you realize that you've been misdirected while someone else puts their plan in motion.

There's nothing on the level of the murder mystery in Knights Of The Old Republic or the fantastic Noveria sequence in Mass Effect, but individual quests within the otherwise dry story arc generally feel worthwhile and are presented with a level of creativity and competence that goes beyond most modern RPGs.

As in all BioWare games, character motivations are still mostly shallow. When a party member or someone in a quest shows a second dimension, you feel optimistic about where things are going, then realize that was it. Occasionally, you find yourself having hilariously "tender" sex just because it's expected at this point.

The game is also packed with filler quests in which you uncover an object, then return it to its apparent owner. These bits have no cinematics, no player driven input, and no real point.

You walk up to a priest, click him, then Hawke randomly spouts a line such as a sarcastic "Here's that thing you live for" as he hands over the ashes of a nun and gets some experience. These bits are so numerous and creatively hollow that they were obviously put in to pad the game's relatively short play time.

Dragon Age II is by no means a terrible game. It is, however, a wildly uneven experience. Its high points are undercut by the cynical approach of its developers to appeal to as many people as possible by restraining themselves at every turn instead of picking a direction and giving it their all.

In the years following Baldur's Gate II, BioWare has shown a frustrating tendency to underachieve. Their games certainly have all the building blocks of something special. A lot of work goes into lore, characters are presented in interesting (if not always believable) ways, and there are usually several quests or areas which stand head and shoulders above the competition. For some reason, however, the end result always feels like it's missing a level of depth, whether in character interactions, game systems, or variety of items/skills.

I hope that the company takes a step back and examines the decisions which led to these deficiencies and ultimately this game, then lives up to their full potential with the next project. Preferably a nerdy RPG.

If that doesn't happen, at least we'll probably get Baldur's Gate III, the Heavy Rain clone where you stop the end of the world by handing flowers to bugbears until they love you and a steamy saxophone plays.