The Tony Hawk series kicked off with two fantastic games, but for the past seven years it has tucked in protectively and let the momentum carry it downhill. Sorry about that, I need a lame opening analogy on my resume or I'll never get a gig at a game magazine.

While the enjoyable skating mechanics of the first few titles are still intact, each new iteration manages to place an increasingly larger barrier between you and the fun. Take the 5 billion point trick lines which require you to memorize and press more buttons than the Konami code to perfectly execute every move, from the Half-Fakey No-Nose 980 McTwist to skating forward. The retention rate for top Tony Hawk players is only 10%, with most developing crippling carpal tunnel syndrome and post-traumatic stress disorder within three months. 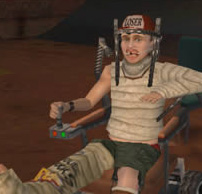 Now this is what skateboarding's all about.Then there's the wacky "Dude, throw this tomato at a dog that's pooping out of its BUTT, and it's even funnier because the dog is wearing one of those cones around its head!" Bam Margera inanity that keeps coming back Rasputin-style when everyone wants it to die. Bam does whatever the bleep he wants, and what he wants is to make Tony Hawk players experience deep shame and regret.

With the release of the sublimely straightforward Skate, the Tony Hawk series is in trouble. You might even say it's time to skate or die, if you're melodramatic and think that referencing old games makes you cool. If the Tony Hawk series hopes to return to its former glory, a number of fundamental changes need to be made. Here are a few suggestions.

Even if these suggestions aren't good enough to implement (that was false modesty, they're totally great), I hope that Mr. Hawk and company can get the series back on track so I can stop worrying about it so much. I've almost forgotten what it feels like to sleep through an entire night without waking up in a cold sweat.

Spider-Man: Friend Or Foe
The freeform web-slinging has been the biggest selling point of the last few Spider-Man games, so it's only natural that this is a standard beat-em-up with no web-slinging at all. 7/10

Tony Hawk's Proving Ground
Does for skating what Bionic Commando did for amputees, but amazingly the franchise without an exploding Hitler head is the one that managed to squeeze ten games out. 6/10

Folklore
If Tim Burton made a game and he replaced every Danny Elfman song with a loading screen, this would be that game. 8/10

Soul Nomad & The World Eaters
Once again, a great name for an overweight agnostic death metal band squandered on a decent strategy rpg. 8/10

The Orange Box
Just buy it already, it's a no-brainer and any joke I try to make will pale in comparison to the humor you'll get in Portal. 10/10

Neverwinter Nights 2: Mask Of The Betrayer
If you can get past the soul-eating mechanic that's more likely to crush and devour yours than provide you with any amount of fun, this is one of the best RPGs in years. 8/10

Tarr Chronicles
When mankind takes to outer space in earnest in the far future, it looks like the universal language will be broken english. 2/10

Undercover: Operation Wintersun
I'm beginning to understand the appeal of alternative history, since this game wouldn't have been made if the Germans had won WWII. 2/10

Final Fantasy Tactics: The War Of The Lions
The only thing better than the game itself is the peace and quiet internet message boards will experience when the annoyingly vocal fans take a break from posting about the original Playstation version to play this. 9/10

Hot Pixel
You'd think that ripping off the four year old WarioWare would at least give you plenty of time to make at least one or two improvements. 3/10

Star Wars Battlefront: Renegade Squadron
You're going to buy that Renegade Squadron + white PSP bundle just for the Vader logo on the system, but this game's good enough to keep you from regretting your decision. 8/10