Now that you've selected your character, it's time to race! As any experienced fan of racing games knows, spending ten minutes with a track is worth more than ten guides. Instead of bogging you down with details I'll just send you off with a few general tips. 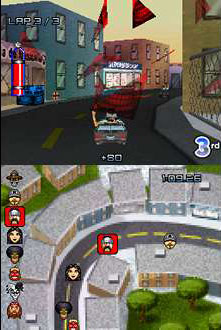 If gigantic shards of red stained glass are hogging the road and you want to pass them, ALWAYS signal your turn into oncoming traffic. 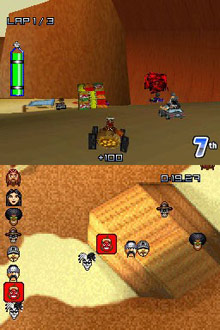 When given the choice between driving directly into a wall of desert rock with a giant rose painted on it and a ramp made of leftover material from the set of Double Dare, go for the ramp. 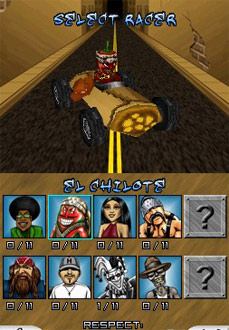 Buy the Corn upgrade for your Burrito Car as soon as you can afford it. It may be a pricey proposition, but you'll be rewarded with a lot more Respect Points in the long run.

The Death Of Gary Gygax

When Dungeons and Dragons creator Gary Gygax passed away earlier this week, I was greatly saddened. I've always wanted to give D&D a try but could never talk my friends into it, so it's not as though I felt a deep connection to the guy through his game. It wasn't even the fact that his work influenced generations of video game creators, indirectly shaping the landscape of gaming as we know it today.

No, what brought a tear to my eye was the amount of lame "Guess he lost the saving throw!" jokes that popped up in nearly every website and forum that discussed his death. A few horrible examples:

"Heart failure? No dragon? Man, the dungeon master is so uncreative!"

"Wonder if his coffin will be six or twelve-sided!"

"When he rolled the dice to see if he lived the number on the dice wasn't enough!"

"Hope he gets to reroll as a female elf."

"At least we know he's going to the big basement in the sky!"

On behalf of everyone, everywhere, I implore you: Please don't you ever die again, Mr. Gygax.

Lost: Via Domus
Aggressively mediocre, adding more credence to the theory that the series takes place in purgatory. 4/10

Army Of Two
The co-op game that exceeded expectations and ushered in a golden age of fanfiction featuring hockey masks and high fives. 8/10

Super Smash Bros. Brawl
Now featuring every character and object that appeared in a Nintendo game, including the kitchen sink from Earthbound. 9/10

Homie Rollerz
Someone actually thought this was a good idea and spent the time and resources to make it, and that's way more funny than anything I could possibly say. 0/10

God Of War: Chains Of Olympus
The most overhyped and overstretched series of the decade gets a slick handheld translation of whatever it is that made the first two installments so popular. 7/10