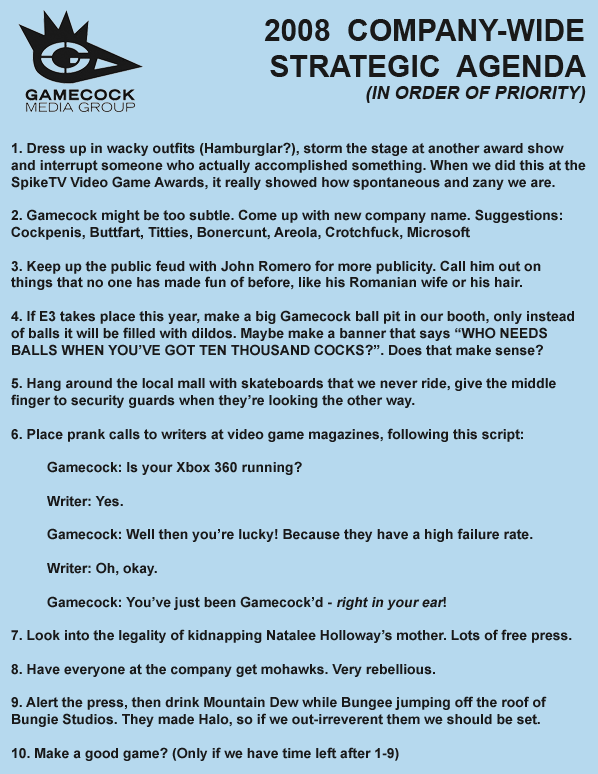 Sins Of A Solar Empire
Winner of several coveted Video Game Article awards such as Best Video Game Title Of All Time, Game That I've Been Hoping For Since First Playing Homeworld, and Most Likely To Have A Star Wars Vs. Babylon 5 Vs. Battlefield Earth Mod By The Time I Finish Typing This. 10/10

Devil May Cry 4
In which Dante is revealed to be a woman, and the entire series a spin-off of The Crying Game. 8/10

Burnout Paradise
The disturbing fact that a city named Paradise has no pedestrians or drivers raises all sorts of philosophical questions which can only be answered by closely examining Takedown Cam shots of other players' junk. 8/10

No More Heroes
A parody of video games and the people who play them; sort of like every Squaresoft game from the last decade, only on purpose. 9/10

Samurai Warriors: Katana
Finally, a first-person sword game for the Wii where you slash by... aiming a reticule at enemies and pushing a button? 3/10

Endless Ocean
The ocean has been occupied by fish, are you a bad enough diver to grope them? 6/10

The Legend Of Spyro: Eternal Night
The most exciting and inspired game about dragons since Lair. 3/10