Tome of Sancia (Thanks, Dirty Beluga!)

The Tome of Sancia is a guide to the laws and culture of "Sancia," an imaginary country thought up by insane turbodork Santo Ciaravino.

The site goes into an astounding level of detail for things like "hookah etiquette" and presents novel, technocratic solutions to problems you didn't know were problems, like parking spots. Meanwhile, the page about Sancia's government structure is just a vague "work in progress." Look, Santo's not really a "big picture" guy, ok?

It is against the law for an institution to assign a working duty to be taken home to accomplish. This includes homework that students take from class, or projects that employees need to take home to work on.

The idea is that no one should take any sign of labor back home, a place of rest and family bonding. The work that should be done in an institution should remain within the bounds of the institution, as the time spent serving there is more appropriate to do the tasks when on duty.

You'd think a guy who writes a ton of words about a pretend country for fun would be a homework-liker, but I guess not.

There's also no gender, thanks to Sancia's unifying "Strict Oneness" policy, which Santo claims is stronger than mere equality. This is reflected in Sancia's flag: 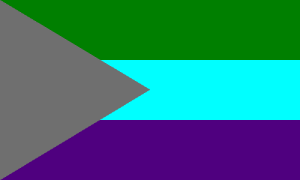 The color Gray is the official, main color of all Sancia (namely being Santo's favorite color). Because of this unique feature, it gets the equilateral triangle shape. The color represents neutrality, balance, and unity from diversity.

Somehow, Sancia manages to sound like a cross between a McWorld commercial and the Neutral Planet from Futurama.

While Santo describes Sancia as "a nation of hedonism and leisure," there are strict courtship rules, which reveal a weirdly regressive attitude toward sex ("Traditionally, coitus [penis-vagina contact] is not permitted unless the intent is to procreate.") Also, any Sancian who's "prospecting for sex" can simplify the process by using Santo's improved version of the Hanky Code:

Orange - I am looking to do dry sexual activities. (ie: making out, groping, cuddling, dry-humping, etc.)

While it doesn't get its own bandana color, bestiality would be partially decriminalized in Sancia: It's only punishable in "specific circumstances," like "if the animal is one's own family pet," because "this is seen as incest." Ok then!

Finally, what made-up country would be complete without a needlessly complicated language? The Sancian word for "salutations" is "SQLWSIDHA." Hopefully they'll provide decoder rings at the border.