Giant Bomb is one of the few gaming websites worth visiting on a daily basis. Their video content has a casual, unscripted, and goofy quality that is engaging and funny. You can get a better understanding of a game by watching a Quick Look (30+ minutes of gameplay with commentary from several editors) than most written reviews. Primarily a console-oriented site, their small group of PC enthusiasts have put out some of the most relatable, hilarious coverage of the platform.

On Thursday, Giant Bomb announced that they had been acquired by CBSi. Many fans were understandably apprehensive. 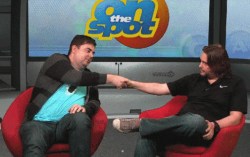 It is, after all, natural to be somewhat resistant to changes in something you enjoy. On top of that, acquisitions and mergers rarely turn out well in the long run. Best intentions become meaningless if a higher-up is eventually replaced by someone that's eager to take things in a new direction.

The whole thing is extra crazy because CBSi owns Gamespot, which is where most of the Giant Bomb staff worked until the highly publicized firing of Jeff Gerstmann in 2007. While that incident stemmed from a business team that is no longer employed at the company, it is odd to see Giant Bomb back in the same building.

While the site's editors seem pretty optimistic, there are still a lot of doubtful people out there. For those fans, what follows is the worst case scenario.

Uncomfortable with a brand using the word "bomb" in a post-9/11 world, a CBS executive will rename the website Gamespop. This will further confuse a large audience who already had problems telling Gamespot and retailer Gamestop apart. (Note: I made the worst typo with "uncomfortable", then made another typo of an entirely different sort when I attempted to correct it. You are witnessing the onset of what is surely a terrible brain disease.)

When one of the Giant Bomb video guys attempts to superimpose a silly fire effect or an animated gif on top of a live video, a Gamespot control room director will slap their hands away.

The new motto will be: Your #1 Source For Cheats, Copy+Pasted News Stories, And Hot Babe Lists

Ryan Davis will be prohibited from wearing shorts. A strict no-tracksuit policy will force Jeff Gerstmann to come in to work in a baby blue tuxedo every day. Brad Shoemaker will be fired for not being good enough at video games.

A scowling man in a suit will dissuade the crew from going off topic on the Bombcast. No more pizza talk, no more personality, no more negative opinions about games without pre-approved evidence that could stand up in court.

Every video will be scripted and play out like the Jim And Derrick show, with segment names like Own Z0ne and Start Play.

Much like every other website on the internet that vaguely covers technology or video games, Giant Bomb will be dedicated to expressing fascination at every single thing that the over-hyped Minecraft creator Notch does and says.

The first five seconds of each video will be totally free. Each of the following five second intervals will be opened up to progressive levels of the exciting new Premium Member Tiers.

Everyone that works on the site will literally be lined up against a wall and executed on a livestream, just hours before they get a chance to reveal the new game to be featured in the next Endurance Run feature.

Deep Black: Reloaded
Leaving cover for more than a second kills your character, staying behind cover just kills him more slowly, and you continually die on the inside. 2/10

Wargame: European Escalation
Precisely as much fun as its name is generic. 8/10

Mass Effect 3
Better ending: The jellyfish from the first game was behind everything. 7/10

Major League Baseball 2K12
Everyone involved would have been better off if they had re-released NBA 2K12 as MLB 2K12, replacing the NBA teams with MLB counterparts. 4/10

FIFA Street
The nice thing about playing soccer on cement is that flopping on the ground to fake an injury requires true commitment. 7/10

Silent Hill: Downpour
When it rains it bores - thank you, I'm taking a rare bow for that one. 6/10

Shinobido 2: Revenge Of Zen
Sneak up on a dude with the awareness of a drugged potato, stab him, repeat ten thousand times. 2/10