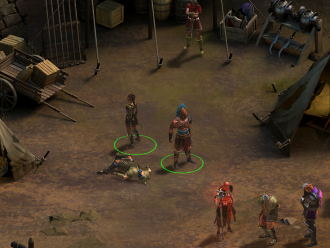 In Tyranny the bad guys have won and you're basically Judge Dredd. Okay, so there aren't any perma-frowns in the character creation menu. And you don't come across any rad reflective visor helmets with garish color schemes. Still, fantasy Judge Dredd.

As Totally Judge Dredd you uphold the overlord's will as you see fit, often exploiting technicalities in the wording of his laws to your advantage. This guy's permit to walk his dog seems in order, but does the document forbid empire representatives from interrupting his walk so they can rub the dog's belly? Sir, I'm going to need you to step back while I give this pooch scratchies. The overlord demands it.

Early on you are tasked with delivering an edict from your boss. This decree states that a BIG IMPORTANT THING must be done by the end of the current month. Let's call it Fantasy December. This starts an eight day in-game timer. Since the edict is magic and evil, everyone in earshot will die if the quest is not completed at the end of Fantasy December. 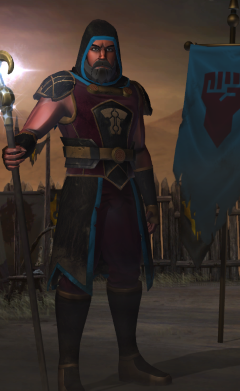 This is where things get interesting. You can decide to waste time and sleep until the month has passed before reading the edict. Then, instead of having only eight days to finish this part of the main quest you will be given nearly a full year - until Fantasy December comes around again. Hey, it's not your fault the edict didn't specify a year!

This would have been a clever easter egg in any other game. Here, it perfectly fits one of Tyranny's central themes. The game isn't just tolerant of players who follow the letter of the law like jerks. It goes out of its way to support and encourage their jerky lateral thinking.

This is just one of many ways that Tyranny asserts itself as more than an offshoot of Pillars of Eternity.

For one, the game is relatively short as far as western CRPGs go, clocking in at around 25 hours. Or 30 if you're a slowpoke like me, scouring every map and mulling over every choice. The idea is that you'll play through several times to see how far the reactive structure goes, like Alpha Protocol. While Tyranny doesn't give you as much immediate branching feedback as AP, you're making significant decisions before you've even left the character creation screen. A surprisingly meaty choose-your-own adventure defines your history and steers the course of a years-long war. It's elaborate and rewarding, but time will tell if not being able to type "STORMTROOPERS KILLED MY PARENTS" in a Backstory field is worth the tradeoff.

The characters and world have a stronger visual style than Pillars of Eternity as well. There's a painterly quality to everything that's reminiscent of Diablo 3, if you stuffed that game with Roman legion cosplayers whose body proportions were lifted from Batman The Animated Series. 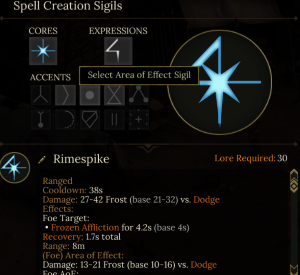 Oh, and one last thing. I never play mages in computer games. Never. I just can't fiddling with books to memorize limited use spells or resting to replenish my casting total. Those things make sense when you're playing a tabletop game where encounters are more rare and flexible, but in CRPGs they always feel like busy work. Tyranny is the first game I've played where being a mage is genuinely fun.

You don't have to rest. Spells are based on cooldowns, so the only bottlenecks are how quickly your character can cast and how many spell slots you have. Beyond that, the spell crafting system is the best part of the game. You start with a core element, like ice. Then you apply something called an expression, which defines how you want that core to take shape when you cast it. Maybe it's a long distance projectile, or an aura, or a magical punch. Finally you add an accent, to further tweak the spell, adding an area of effect or increasing the duration or just making it stronger. Each component comes in the form of a scroll that you find or buy, making loot as rewarding for the mage as it is for gear-dependent classes.

My character is a punch wizard. Or a fisticaster? Magic fistle? I wear light armor and fight unarmed, which gives me a faster attack speed. I cast spells at people then bop them on the schnoz, then punch magic into their guts. There is no reason why I shouldn't be able to do this in every game.

Planet Coaster
I'm withholding two points from the score until it's possible to put on a VR headset and ride my thrilling water adventure. 8/10

Final Fantasy XV
Weird and ambitious, that's how I'd describe my attempts to move in any direction at all or do combat in this game. 7/10

Watch Dogs 2
It's 10000 times better than the original, which is to say it's a mostly okay game with uneven writing. 7/10