Sunday, Dec 10, 2006 by Hassan "Acetone" Mikal
DocEvil is dead. As he attempts to claw his way out of heaven I have been asked to take the Weekend Web helm for the time being. Today we're going to go on an adventure through some really horrible forums. And as always you're welcome to come along as we explore the vast horrors the Internet has to offer and make fun of people who never deserved it and are probably nice people in real life.

Well, I wanted it to be a surprise but someone had to go and spill the beans! 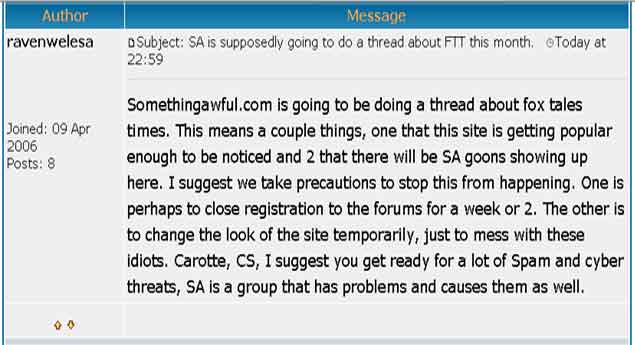 Since the cat is out of the bag I might as well reveal that one of this week's forums is Fox Tales Times, the number one site for guys who like to dress up as animals while shitting their diapers. While Weekend Web always stirs up controversy, this time it started early. Before the feature even hit the World Wide Web, the drama has been brought to my mama.

Ah man, they're gonna fuck up our shit! Sound the siren ma, a guy with an avatar of a 16-bit sprite in a diaper is gonna teach us a lesson! Let's see what a 38-year-old from Tennessee who wears diapers thinks about these startling developments.

What's all the fuss about anyway? What could be so bad about furries in diapers?

Not having control of my bowels. I'm lovin' it. Then there's this guy, who is trying to break some kind of Guinness World Record I guess.

Now this is a contest! Who can wear the most diapers to sleep? I'll be following this one all the way to the finals.

When someone e-whacks you with a fan do you have to type back, "ouch that hurts lol" or something? How does that work exactly?

Live from the state mental institution it's Kit_Kiama rambling on a message board! Why do they give the patients computers?