Wednesday, Oct 11, 2006 by Dr. David Thorpe (@Arr)
Oh boy, it’s every music fan’s favorite time of year: pre-Christmas Greatest Hits Shit-Shoveling Season! It’s a magical time, when record labels put their commercialism aside and act out of pure benevolence, providing consumers with delightful studio outtakes and bonus tracks, with extensive liner notes, with digitally remastered sound! I can’t wait to buy every single album on this list so that I might stuff the stockings of my loved ones with the gift of music in three months, or whenever the hell Christmas is supposed to be nowadays!

Too bad they didn’t stop the clocks back in 1995 when anyone gave a shit. But did you know that people in England still listen to Oasis? Truly a sobering thought. It’s like learning people in Germany still cast posthumous votes for Hitler in every election or something.

Sometimes I like to fantasize about a music video of Jesus Jones singing “Right Here Right Now” in front of a big TV screen showing footage of bulldozers knocking down the Wonderwall. It makes the tears well up a little.

Aerosmith
Devil's Got A New Disguise: The Very Best Of Aerosmith 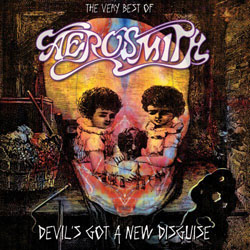 There is absolutely nothing funny left to say about these shit-eating, moss-caked old liches. Oh wait, here’s something funny: Steven Tyler has hepatitis. I just hope it doesn’t kill him before some enterprising guardian of human culture can cut slit his throat from ear to ear. The only Aerosmith record I would ever buy would be a recording of that event: Steven Tyler Live: Begging, choking, gurgling, hacking, and finally fucking expiring.

I’d buy one of those insane audiophile systems for that. I’d put up acoustic egg-crate foam paneling on all my walls, and I’d buy solid-gold stereo components to ensure the most flawless fidelity imaginable. I need to hear every detail, every taut neck-tendon snapping, every screech of dull knife on cartilaginous windpipe. Ah, and I’d sit back in a big leather recliner, in the pure euphoria of knowing that Steven Tyler is suffering as much as he’s made our brain cells suffer for so many years.

Legal notice: Killing Steven Tyler, even at my behest, is not considered legal in most municipalities.

Dave Matthews Band
The Best Of What's Around Volume 1

The Dave Matthews band is the ultimate example of the “good drummer law.” If ever you say something bad about a band and somebody says “yeah, well they had a really good drummer,” the band is even worse than you thought, and the person who made the remark is mentally unfit to be considered human. It is the ultimate weak-ass argument, and it is the last resort of the truly fucking clueless.

Take pity on the poor soul who invokes the good drummer. Buy him a lollypop and a copy of Phil Collins’ “No Jacket Required,” and mercifully prod him into the nearest active volcano.

People didn’t want to buy their last Greatest Hits thing because it didn’t have “It's The End Of The World As We Know It” on it, and nobody’s going to buy this one because it doesn’t have “Everybody Hurts.” REM should take a hint and release a comprehensive collection that has all of their good songs on it. Oh wait, they sell those in spindles of 100 at Staples.

Moby is truly a vile little man. He looks like a turtle without a shell, he’s offensively vegan and Christian, he teams up with gutter trash like Gwen Stefani and Deborah Harry, his songs are in more commercials than Ronald McDonald, and he splits his time between soulless, unenthusiastic, cripplingly white dance music and ungainly, rock-insulting pastiches of Joy Division and other bands he’ll never, ever be able to touch. So, yeah, here’s an album of stupid shit to buy if you’re hopelessly clueless about music and just want to hear something that’s not going to make any miniscule, rudimentary effort to challenge your mind or stir your soul.

Shameful garbage. This is the kind of shit middle-aged “spiritual” bookstore owners listen to when they want to get all jazzed up herbal tea and jerk off in a lukewarm bubblebath. 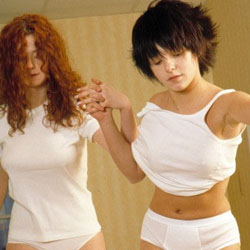 Hey, it’s those two teenaged Russian phony-lesbians who were popular for about ten minutes before everyone realized they were straight and, come to think of it, kind of homely.

There are two types of Greatest Hits compilations in this world. Firstly, you have the high profile compilation, like the Aerosmith set, that record labels push out during the holiday season in order to sell a guaranteed few million copies and buy the head of the label a helicopter full of teenage boys. Secondly, and more commonly, you’ve got a label shoveling out a last-ditch effort to recoup their losses from a giant hype campaign that amounted to jack shit.

Come on, do you honestly expect me to come up with something interesting to say about Jamiroquai? They had one and a half hits, the singer wore furry hats, and they always had the funk dial set to “4.” Apparently, while nobody was paying attention, they managed to slip twelve years of singles into the market unnoticed.

You know, maybe there is some middle ground between the two types of “best of” compilations I just mentioned. I think this is just one of those “hey, we’ve released about 15 singles, let’s put them on a compilation and maybe we’ll make enough money to buy one of those awesome mini-motorcycles” things.

Electronic
Get the Message: The Best of Electronic

Hey, did you guys know that the guitarist from The Smiths and the “singer” from New Order got together and formed a supergroup in the 90s? Half of you are probably thinking “if it were any good, I would have heard about it before now,” and the other half of you are thinking “thanks a lot, Dr. David Thorpe, I had forgotten all about that painful disappointment.” Guess what: you’re both right!

Electronic is kind of like Bruce Willis and Demi Moore’s daughter Rumer: two reasonably attractive people bred and managed to spawn a creature with only the bad features of the two of them. Instead of combining the pop guitar virtuosity of Johnny Marr’s Smiths days with Bernard Sumner’s compellingly abstract New Order lyrics, Electronic mashed together New Order’s chintzy Regret-era dance-rock with the uninspired blandness of Marr’s hired-gun studio guitarist days. This is the sound of two artists meeting up at the absolute bottom of their game, and it crackles with about as much electricity as a bowl of oatmeal.

Roxette
A Collection of Roxette Hits: Their 20 Greatest Songs 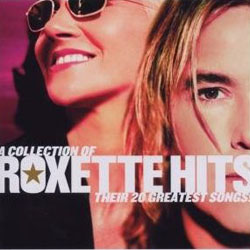 Jesus, Roxette wins for “most elaborate title.” How the hell did they come up with that? Was that the absolute minimum length they could make it while still preserving their intended meaning? I wonder if the title was originally “The Best Songs Ever Written by Roxette: A Collection of The Greatest Songs Even Among Those Songs,” and they had to slave and sweat and yell at each other for fifteen straight hours in a smoky record label boardroom before they managed to trim it down to a slender eight words. People probably stormed out and quit the band over the controversial decision on whether to excise the “Presented Retrospectively by the Band Roxette” clause.

It was no “Joyride,” I can tell you that much. HA!

Anyway, fuck Roxette, like most of the bands on this page, for thinking they deserve a greatest hits album. Everybody had forgotten about “Joyride” until I made that fucking awesome “Joyride” joke a minute ago, there’s nobody in the universe who doesn’t hate “It Must Have Been Love,” and “The Look” was rendered totally obsolete when Savage Garden released “I Want You,” which was exactly the same song except without any girls in it (although those Savage Garden dudes try pretty hard not to be dudes, I reckon).

Mansun
Legacy: The Best of Mansun 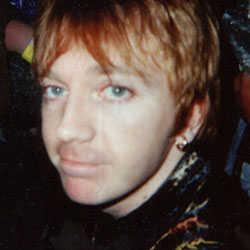 Whoof, the title of this collection is so ironic that it knocked the wind out of my lungs. Putting aside for the moment the fact that Mansun had approximately zero hits and about negative one memorable song (I say negative one because you’re probably thinking “no way, they did that song ‘Every Me, Every You,’ but that was Placebo, idiot), Mansun has about the most pathetic excuse for a “Legacy” in recent rock history.

What have they passed down unto the new generation of rock? Pure ugliness. While their debut, “Attack of the Grey Lantern,” stands up as an extremely dated brit-rock trifle, their sophomore album, “Six,” is far more sinister in its implications. By combining pompous guitar pop with an extremely dumbed-down interpretation of prog, they effectively gave birth to a thousand Mars Voltae and a thousand more assorted Coheeds and Cambrias. Perhaps that gives them a little too much credit for influence, since they were basically irrelevant in their own time, but the mere fact that they did it first makes them criminals in my book.

And I said “ugliness” earlier, but I’m not sure I can let this review go without mentioning just how physically and sonically revolting singer Paul Draper is. He looks like a malnourished Jon Bon Jovi with bad teeth, and he sings like Billy Corgan with his testicles in a vice.

Primus
They Can't All Be Zingers: Best of Primus

Classic “big brother music.” The only people who are halfway forgiven for giving a shit about Primus are guys who are like fifteen years old and still haven’t come into their own, and they idolize their retarded stoner big brother because he’s got a car and he brags about having sex with girls (without truth) and he’s got a rockin’ dustache and he listens to Primus. Luckily, by the time these guys are seventeen or so, their brother is driving a forklift at the dump and they’re like “what the fuck was I thinking, my brother is a huge piece of shit and Primus has always sucked.”

So, Primus fans, pick one. You’re either the kid who’s gonna grow out of if or you’re the big brother.

P.S. – Les Claypool fucking sucks and you’re in serious need of retuning if you can’t tell.

Ugh, that's it for this year's awful compilations. As usual, questions or comments can be sent to davidthorpe@somethingawful.com, where they will be ridiculed or ignored (but nothing between).