Get Your Ex-Girlfriend Back (thanks Rigamarock!)

Thursday, Mar 27, 2008 by Caylen "Abraham" Burroughs
Know of an awful site? Send it to us and become a hero! 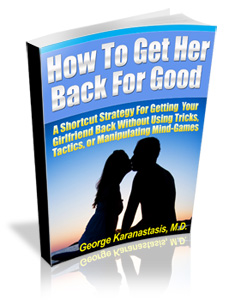 You're Just 2 Minutes Away From Setting Into Motion A Strategy So Simple, Yet So Powerful, It Will Leave You Dumbfounded As She Rushes Back Into Your Life With Jaw Dropping Speed

Today's Awful Link is fucking dangerous. It's not often we see a scammer put so much effort into taking advantage of desperation and hope, without getting some super delegates in the process. Dr. George Karanastasis, whose last name is the amalgamation of four different Magic cards, is hawking relationship advice befitting someone who is less medically qualified as the Spin Doctors. For only $100, you can start taking action and read a book that tells you what women really mean when they say "If you keep driving by my house, I am going to call the cops", allowing you, the guy who just does not get it, to win her back without using any mind-games, tricks, tactics, force-pulls, or lightsabers. It also comes with a free lifetime membership to a message board that doesn't exist, so you can talk to other people that were stupid enough to buy this book for $100. But that's not all: 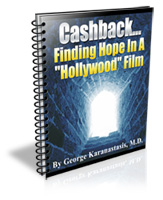 "But what do films have to do with your relationship?

Simple. This report puts to rest (once and for all) any doubts you might be having about getting your girlfriend back.

Because when you're done going through this, you'll no longer be asking yourself the question, "What are my chances of getting her back?"

That's right - a spiral bound notebook, filled to the brim of xeroxed notes Dr. George wrote about his three ex-wives while he was watching this short film stoned out of his gourd. It's hard for me to put a finger on what makes this website so bad in general - be it the checkboxes at the top of the page that don't do anything, the random bolding and highlighting of various phrases, the gigantic slow and horrible javascript cursor of an orderform that doesn't go away when you close it, or simply the glaring fake, over-the-top testimonials written by the good doctor himself. My favorite part though is how it advertises that women cannot be fooled, but they can be convinced that what their heart is telling them is wrong, and you can enlighten them on why they made a silly mistake in leaving you. He calls these methodologies "weapons". They are probably much more dangerous than that.