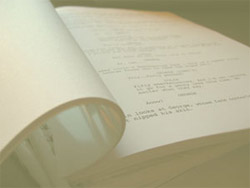 Four years ago I was approached by an independent production company to do rewrites of their screenplay for an upcoming TV pilot. The show was a forgettable mess of PG-rated erotica and dollar store Shakespeare. It was about young and hot 20-somethings on both sides of the law doing crimes and serving justice.

I did two rewrites, but I hated most of the characters so much my dialogue read like something out of a 1930s adventure serial. That's my excuse, anyway.

At the behest of the production company my first rewrite added a child-murdering mafia sniper and graphic sex scenes in the hopes of "HBOing it up." They seemed to like the draft, but after a week they came at me with a bunch of notes suggesting they hired me to add comedy. They sent an avalanche of short , poorly-spelled emails that offered cryptic advice like, "JOSH WHEDON?????" or "BREST HUMOR."

In one instance they quoted a bit of dialogue in which two characters were discussing the murder of their father and they literally observed, "GOOD FOR A JOKE?!????"

After a few phone calls with the original writer I produced a second rewrite that looked more like National Lampoon's CSI. They loved it. I felt dirty. There was a dog that had a "whimsical grandpa" voice over and an abortion subplot had been plastered over with a lesbian identical twin. This was what it felt like to be a whore to Hollywood and it wasn't even paying well.

Two years later I saw the series running as webisodes and the premise had been completely changed around by a subsequent writer. I couldn't quite bring myself to watch the webisodes, although not out of any misplaced artistic BS like a "commitment to my original vision." I would be a liar if I pretended my hacky trash was worth defending. No, I was afraid that the barebones five minute version of the scripts that cut out my wonderful mafia child-killing assassin would be far superior.

The good thing about this first experience with the fringes of Hollywood was that it prepared me for the complete ignominy of doing freelance rewrites. Since that first debacle I have averaged about one every three months. I usually do TV pilots that will never see the light of day, but I have also worked on the occasional movie from a straight-to-DVD or indy production company. 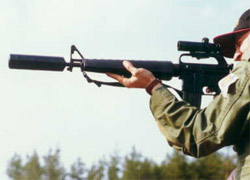 I was surprised to discover the TV work has a bit more integrity than the film stuff. A lot of the TV projects start with a nugget of a good idea that rolls down a shit hill picking up shit until it's a giant shit ball crushing the ski lodge in its path. Even that first rewrite work I did had a dreamy sort of John from Cincinnati feel that was eventually lost in fart jokes and silenced AR-15 headshots to kids on playgrounds. By the time I was done with it the show was Silk Stalkings crud.

TV may have some redeeming qualities, but the direct to DVD movies are the real source of my trauma. I've done rewrites on seven or eight projects (depending on if you count when one project turns into another project halfway through) since 2005. Two were quick and cheap jobs where they wanted some punched up dialogue. On these I go through the script and do my best to turn the "zany sidekick" into the "funny sidekick."

I don't mind that sort of work. I was given a lot of leeway on both rewrites and I produced dialogue for a teenage character in a horror movie that strained the limits of "unrated" and a retired cop in a buddy movie who went from wisecracking loose-cannon stereotype to sad sack nihilist with inoperable cancer. The teenager was toned down in the final rewrites, but the cop survived and I'm anxious to see if he makes it to the DVD version of the movie.