The Xtreme Strength Gallery, submitted by Mangoat. Hooray!! A new sexual fetish appears to be taking hold, or at the very least a new form of a longstanding sexual fetish. Amazon women have always been hot with a small portion of the male population. For whatever reason they get turned on by big, sweaty, sometimes even hirsute women. Hell, in Japan they added their own twist to this by magnifying their breasts to ridiculous sizes and giving them penises! Now we have the "Superhumanly Strong" woman to worry about! On this site you will find dozens of HORRIBLY Photoshoped images of models, celebrities, and porn stars crushing cars, lifting tanks, and bending guns with their breasts. Did I mention that these are some of the worst Photoshop jobs I have ever seen and I regularly read FARK! 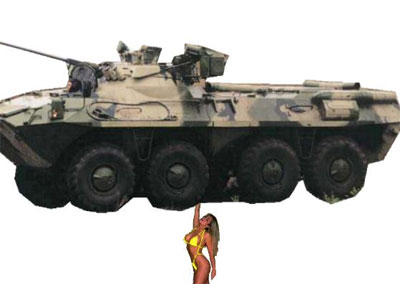 Real or fake? by Damian. "Are these real or fake dumbbells?" says the supergirl in front of you, "I can't tell the difference!"
Making A Note by Damian. She is jotting down a note that reads: "Must get heavier dumbbells, current set too weak."
Baton Twirl by Damian. She had been twirling the weights like a baton until she accidentally rotated them too rapidly and twisted them horribly out of shape.
Paper Car by Damian. She feeds the engine block into her cunt as she squeeses her mighty thighs together.
Soft Car by Damian. Britney mashes her ex-boyfriend's car like tissue paper with her butt, tearing her clothes in the process

Another major theme on this site seems to be women crushing cars or generally accidentally or intentionally destroying things with their incredible sex appeal. The comic relief is provided courtesy of Photoshop's lasso tool and Google's image search.