Aliens and UFO Art, submitted by Jack. It is so difficult to encapsulate an entire conspiracy theory in just one word, but I'm going to try anyway: holyshitthisisgoddamninsane. Yeah, that's the ticket. Wiolawa is a person or organization, I'm not honestly sure which, that has all the secrets that our dastardly government doesn't want us to know. Most of these secrets involve alien lizards posing as human beings, but some have lasers. Yippee.

BLACK JESUIT ORDER OF LIZARDS
they keep taking this page down inside my computer.. any ideas why? im tired of this from these black kreeps from HEIL! SO i shall keep it up at the TOP in honor of these snakes and lizards.. that JESU or any EASU despised as well.. !!!! TO this page i added the analysis of Cardinal "Pedophile" REPTOID LAW.. he is not human either!! and you humans ask why do these priests do this.. ?? the answer is they are not HUMANs..

Yep, that's insanity for you. Now don't get me wrong, I don't approve of pedophilia in the clergy or of Cardinal Law's flimsy defense of the horrible sodomizing of young boys, but I'm just not convinced that he's a "reptoid," even though I've seen this picture, which is supposed to be pretty damning evidence: 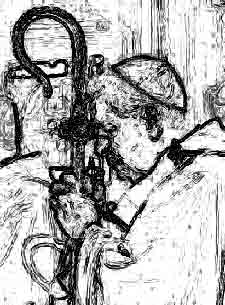 Basically, the nutjob behind the paragon of spelling and punctuation that is this site believes that if you solarize a picture of someone in Photoshop, then desaturate the picture, you can see through their flimsy human disguise. At that level, everything becomes clear - from the reptilian claws clearly evident on the Cardinal above to the snake creatures living within the core of Mars. The reasons that this maniac has for deciding who is and who is not a lizard are staggeringly hilarious. Cardinal Law is an alien lizard because of his inhuman chin and ears. Rush Limbaugh is an alien lizard because of his nose, which could never belong to a real human being. Hans Blix is not only a lizard, but a cyborg lizard because of the general shape of the top portion of his head. I would have to be crazy to try to actually capture the lunacy of this site in a few short paragraphs. The only way to understand just how deep the alien/lizard/snake/cyborg conspiracy runs is to see it for yourself. Once you're convinced that aliens live among us (if you don't believe it, you must be one of them), you can express your outrage on the site's forums. Careful, though! Wiolawa's old forums had to shut down because too many lizards wouldn't play nice. We wouldn't want that to happen again, now would we?