Sailormoon-Starcraft Fanart, submitted by Slinky. When this tangled web of information, advertisements, and pornography we call the internet first began, I wonder if anyone had the faintest idea how quickly it would cater to every imaginable fetish, cause, organization, obsession, occupation, and hobby. If you have the slightest inclination to find pictures of baby Jesus playing football for the 49ers, believe me, you can if you just search hard enough. In fact, it will probably be an Awful Link sometime in the near future. Nerds, geeks, and lunatics everywhere have filled the internet with so many pages dedicated to every aspect of everything imaginable that there's no point to starting a webpage anymore unless you're willing to combine interests. For instance, there's nothing new to be said on the subject of playing the piano. Especially not with your shoddy piano skills. Who are you to start a website about playing the piano anyway? There's also nothing new to be said on the subject of mayonnaise. However, if you are would be willing to spread a few jars of mayonnaise over a piano - and be sure to dab some over all of the strings, too - then record yourself trying to play, then you'd have an idea for a website that only six or seven people have had so far. That's right, combining interests is the way to go.

That last long, boring paragraph was my way of saying that I can understand what would prompt a person like KingSaba to make a site of Sailor Moon and Starcraft fanart. After all, the internet has no shortage of Sailor Moon fanart or Starcraft fanart, but there aren't that many artists out there who specialize in pictures of both at the same time. I'm not saying the idea is going to win the Nobel Prize for Art, or inspire to Nobel committee to create a Nobel Prize for Art, but I can understand where it might come from. Here's the problem: what we're dealing with here is not actually Sailor Moon and Starcraft fanart in the sense of it being drawings of the Sailor Scouts doing battle with Protoss warriors, but rather art from the Sailor Moon anime photoshopped with astoundingly little skill over art from the Starcraft video game, and vice versa. Observe: 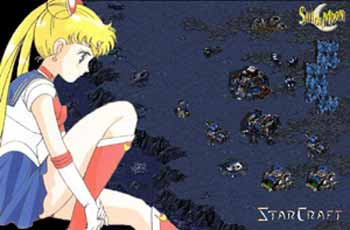 This must have taxed KingSaba's skills for all of three minutes, maybe even four. Far be it from me to limit anyone's right to express themselves artistically, but this strikes me as the sort of thing that doesn't really need to exist. And there definitely doesn't need to be more of it. And for the love of all that is holy, there certainly doesn't need to be a website dedicated to nothing but this hack job crap.