drew, submitted by SetCea. Drew is a very prolific writer. Sadly, Drew is also a very bad writer. He stinks something fierce, and yet, he keeps on writing. He even writes for a monthly British magazine, which really baffles me. I mean, I know Americans tend to think of any sort of British publication as being classy, and I'm willing to set that stereotype aside. But at the very least, I would think that a magazine run by the country that gave birth to the English language wouldn't want to hire someone who butchers it so completely. He writes like a six year old, which made me hope, as I read through some of his work, that it would turn out that he was just writing as some sort of character. But every single thing is exactly the same. Pointless observations surrounded by improper capitalization and an overabundance of punctuation. It's like reading everything Jeff K has ever written, only without the L33T charm.

yesterday i finally felt better, i think all the bacteria left my body due to the incredibly toxic environment of coffee and hot sauce in my blood!! i could not taste anything for a few days so i ended up putting CHOLULA all over almost everything i ate. (it is el sabor autentico de la salsa mexicana!! THE MEXICAN WOMAN ON THE FRONT OF THE BOTTLE IS CUTTING UP PEPPERS, it is a testament to the power of the hot sauce!) plus i was having trouble thinking properly or having enough motivation to do things like standing up or walking around so i drank a lot of coffee, i am not sure if it helped but mmmmmmmm coffee,,,

I'm sorry, how the hell do you justify ending a sentence with three commas? This is just beyond me. But that's okay, Drew isn't just a writer. He's also an artist. 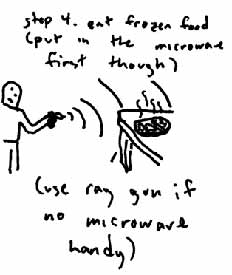 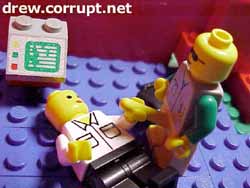 Aaaaaaaaaand I hate my life. There is a disturbingly large amount of this lego-smut to be found on Drew's site. And of course, by "disturbingly large amount" I mean "any amount." Oh lord, there's even one where a guy chops off a lego-woman's arm with an axe and sticks his yellow cock in her arm-hole. Goddammit, say what you will about Jeff K and how incredibly annoying he is, at least he's never grafted disproportionately massive penises onto legos. That I know of.