Wednesday, Apr 14, 2004 by Reid "Frolixo" Paskiewicz
Know of an awful site? Send it to us and become a hero!

All Sci-Fi Game, submitted by melonopolis. I'll admit that I'm not a huge Star Trek fan. Sure I watched the old ones because they had the unstoppable duo of Shatner and Nimoy, but I really don't know anything about the new versions. All I know is that they spawn the worst of the worst fans out there. These are the people that are the lowest dredges of society, the people that would commit suicide like a pack of lemmings if their favorite sci-fi show was canceled without warning. The bulk of these fans also happen to be males. Lonely, lonely male virgins who fawn over all the Star Trek females (and probably the males too). To illustrate the fact that I'm not exaggerating, take a look at Allscifi.com's Star Trek game. It's a twisted form of a erotic role playing through e-mail, complete with horrible fake nudes that cycle through as you refresh the page. Each character has stats like combat skills, intelligence, attractiveness, and income. I really have no idea how to play this stupid game so I first clicked on "The Nerd Barclay", and tried to seduce him. When I sent in my e-mail I got this reply.

Fuck! I never win at these things! Ok since they figured out I'm not a gay man, I'm going to try to abduct Captain Kathryn Janeway so I can torture her and she can tell me the secrets of her ship. After clicking on "abduct/kidnap", I was given this message:

"You see your target Captain Kathryn Janeway performing an errand for his employer at the local fish market. The target is trailed by two other people who might be coworkers or who might be guards.
Wait
Launch kidnapping attempt now"

I tried to kidnap her but failed so I cheated and when back and waited but that failed too! This is a setup! Anyway I finally stumbled across the rules and things started to make sense. Actually no, no they didn't make sense at all. It seems that any sci-fi, fantasy, or anybody that's ever been on televison or film is in this game and a hell of a lot of people play it. This game is really horrible, but I'm not going to give up until I can rescue Wesley Crusher from his current owner "bear", even if it means a rumble. 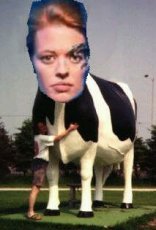 Utters of 9, the least kidnapped, seduced or fought over character in the game.

Go ahead and try to see how many indentured servants of sci-fi and fantasy you can get! Or don't. Hey at least before I left this terrible game for good, I seduced the most sought after servant, Mariah Carey, and was named the player of the day, but then somebody stole her away right away. I can't believe I wasted 5 minutes of my life on this. (Come back to me Mariah!)