Aliens and Children, submitted by eloH.The question of alien life forms visiting this planet has been debated for centuries. The biggest problem with getting the real truth is that there was no way of sharing the information. Now thanks to the Internet, we can finally know the truth about what is going on in our universe. The facts are astounding. Just take a gander at this:

"For years there were accounts of alien encounters where the aliens showed a little black box to humans. The aliens held up the box and pointed to it, then returned to their spacecraft and left. People having such encounters wondered why the aliens did not try to communicate with them further. The contents in the little black box remained a mystery for decades. Thanks to investigators such as Bud Hopkins and Dave Jacobs, we now know what is in the box."

"The box contains a live fetus of a hybrid which is part human and part alien. Showing the box is an act of triumph. The aliens plan to colonize the earth with their new race and replace the human race. By showing the box the aliens are demonstrating that they have succeeded in creating a replacement for the human race. "

Simply amazing! All these years I thought they were offering me a box of jelly donuts, and like a fool I took them up on their offer. No wonder they got so angry and would always zap me with their space guns. This site specializes in the abduction of children in particular, and there is a multitude of drawings that the children drew themselves. This must be proof at the existence of aliens because kids never draw anything that isn't real. I saw my niece drawing a unicorn yesterday and questioned her for hours, asking her where she saw this magical creature so I could harvest its horn for a tidy sum. 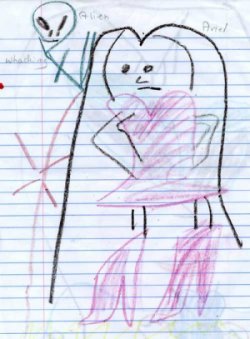 Apparently aliens like to kidnap children, dress them like sluts, and whack off while peering over the table.

I think my favorite thing on this site other than the horrible children's drawings (soon to be reviewed by Livestock) is the thought screen hats. Talk about a bargain! Just look at all the types of aliens it can protect you and your family from:

I don't know about you, but I'm sending my order today before the Meek-Moks kidnap me and make me put on 8-inch pink heels - again.