Tuesday, Apr 27, 2004 by Rich "Lowtax" Kyanka (@TwitterHasBannedAllMyAccountsEver)
Know of an awful site? Send it to us and become a hero!

Multiple Stalker Information and Support Site, submitted by FunkyBunny. Let me tell you something ladies and gentlemen: everybody in this world is out to get you. Do you remember how old Nintendo games would promote a highly violent, xenophobic world where even coming into casual contact with something else would result in your immediate loss of life? Well it turns out life is imitating art, as the Multiple Stalker Information and Support Site is here to help all of us people throughout the world who are the victims of a vague conspiracy out to tamper with our mail and get us fired from our lucrative jobs of being unemployed louts. 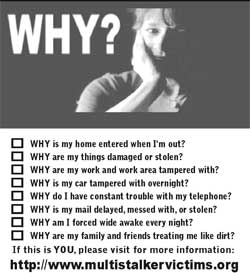 " "For more than a generation," the story said, "Bakersfield was run by a cadre of men who led double lives. To the public, these men were members of the community's most visible institutions, its justice system and the media. "But in truth ... these men -- a sprinkling of county executives, judges, prosecutors, defense attorneys, even the newspaper's publisher -- were part of a loose-knit, secretive network. "Some were homosexuals who preyed upon young men and boys, then used their positions of power and influence to protect one another from possible ramifications.

Occasionally, however, the preyed-upon lashed out, leading to a string of murders involving young gay men and their prominent older male suitors." In the late 1970s and '80s, the victims included two millionaires , one of whom was on a county crime commission; the Kern County personnel director; the owner of a fashionable hair salon; and a 14-year-old girl who attended parties thrown by Bakersfield's one-time police commissioner, who committed suicide after being charged with providing marijuana to minors. With the exception of the girl, whose case was never solved, the murders were committed by teenage or young adult men who said they had had sexual relationships with the victims."

Hey wait a minute you crazy broad, where does the mail tampering come into this? I want to read exotic stories of mail tampering, not this sissy homosexual pedophile rapist bullshit! Get to the good stuff! Booo! I hate multiple stalkers! BOOOOO, GO BACK TO RUSSIA!!!

PS: Be sure to check out the webmaster's death threats given to her by various Satanic organizations hellbent on killing her cat. You know, because Satan wants his followers to kill pets. None of that apocalypse shit, he just wants to see ol' Fluffy kick the bucket. Maybe he should give his cults a few lessons in spelling and grammar, as their crappy death threats tend to reflect poorly upon his leadership.