With another year down the toilet, we wrap up the top releases of the festive season in Les Misérables, Django Unchained, Jack Reacher and This is 40. After that, we have our annual retrospective in the form of three very nice articles

EXPECTATIONS: I went to a major theatre college. When I say major, I mean it fed students directly into one of the biggest repertory theatre companies in the country. What that means is that I've been avoiding all of my friends since this thing was announced, because literally every decision or rumor that came through lit up my Facebook feeds with people who think they know better than professional filmmakers. (I am aware of the hypocrisy of this statement.) For example, remember when Taylor Swift was supposed to be in this? Man, that would have been a disaster on par with The Hindenberg, casting a young blonde pop singer in a role which requires the actress sing and be young and blonde. Anyway, the point is, I want to get this thing over with, because I'm tired of avoiding people I like.

REALITY: Musicals are cool. Musicals are awesome, in fact. They're a fun, powerful art form that no one should be ashamed to enjoy. Unless it's RENT. RENT is terrible. The point is, we're past the point where people have to feel like they have to defend their appreciation of people singing their feelings. Which is why it's such a letdown that Tom Hooper treats Les Misérables like he's in an episode of Glee trying to get in the football team's face yelling "Look! Musicals are hardcore! They're dark and gritty and tough! Don't dump slushies in my face, if that's still a thing they do on this show, the guy writing this doesn't watch that show anymore." 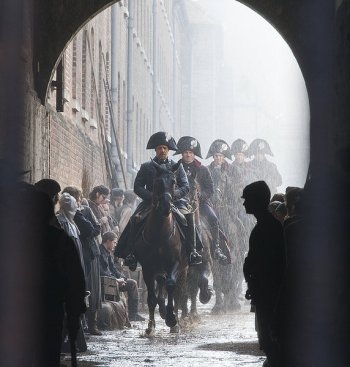 Everybody loves Russell Crowe, right?Okay, so, allow me to introduce you to the plot of the 30-year-old musical based on a 150-year-old book. Jean Valjean (Hugh Jackman) is a former prisoner who breaks parole and has been pursued by police captain Javert (Russell Crowe). After re-building his life as an honest man, he is inadvertently responsible for the humiliation, starvation, and subsequent death of a prostitute named Fantine (Anne Hathaway), and agrees to take care of her daughter, Cosette, which always bothered me, because it really seems selfish of a man on the run from the law to bring in a child, especially when he could easily set her up for life.

Anyway, she grows up to be Amanda Seyfried, and like most things involving her, everything gets really boring after that. Cosette falls in love with revolutionary Marius (Eddie Redmayne), who is the object of affection for Cosette's former childhood housemate, Eponine. (Broadway star Samantha Barks, who is the only thing that makes this section worth watching). Everyone gets intertangled in the June Rebellion, and then a bunch of people die, and they're singing the whole time. Are we all caught up? Okay.

Whenever you're adapting something as large-scale and bombastic as Les Mis, there's going to be issues in translation. This is to be expected, especially when your supposedly built-in fan base is ready to turn on you when you don't match their ridiculously high expectations. When you face this, you have several options. You can either be ridiculously faithful to the source material, or you can do whatever you want, fans be damned. Director Tom Hooper tries to wear both of these hats, and it doesn't work as well as he would hope. The film remains slavishly dedicated to the play, and as a result, every part of this movie that I enjoyed is because I enjoyed it in the play. Every part I don't like, I don't like in the play. It doesn't have much merit on its own as a film.

Where it differs, however, is in the performances. We've known for years that Jackman is a song-and-dance man, but Crowe and Hathaway are where people had doubts. Everyone in this film makes it a point not to deliver their lines in operatic style, like you would see in a Broadway show. Instead they act like, well, actors in a movie, who happen to be singing instead of talking. Crowe and especially Hathaway pull this off better than anyone, and Hathaway's heartwrenching performance of "I Dreamed A Dream" is easily the highlight of the film. Is this really a surprise though? Anne Hathaway and Russell Crowe put in good performances because Hathaway and Crowe are good performers. Tom Hooper didn't have to do much other than turn the camera on and let them go.

In fact, that's basically all he did with Anne. The most dramatic songs are filmed in the most boring way possible, placing the actor's face in a full close up, middle of the screen, hold there for the next four minutes. In fact, I'm starting to believe that all Tom Hooper can do is turn a camera on in front of some good actors. It's not exactly hard work to get good performances out of Geoffery Rush and Colin Firth, and the man won a friggin Oscar for that. He's like the highbrow version of Kevin Smith. In fact, possibly worse, because Smith at least writes his own material. 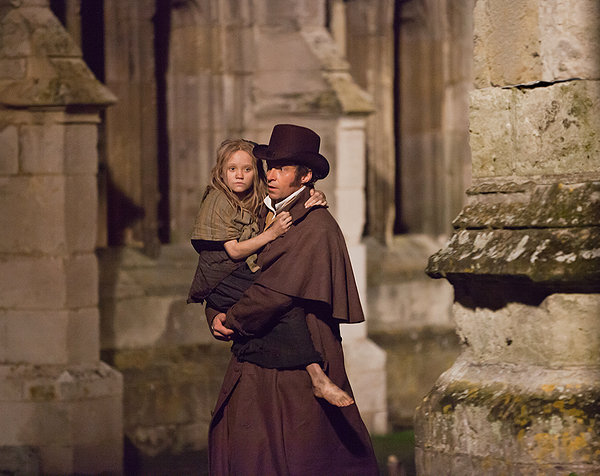 Come with me child, I'll protect you in prison.

I do point all the blame for the parts of this film I don't like on Tom Hooper (and Amanda Seyfried, but we'll get to that). I feel that as careful as he was to stay true to the material, he didn't really understand it, and the credit for the performances should go to the actors themselves, not him. For example, even though this is a bleak, dark story, it's presented on stage in a flurry of color and production. The movie, however, is an ugly, grey, uninteresting void to look at with some of the laziest cinematography possible in a film of this budget. I've already mentioned the horrible misuse of close-ups, but Hooper makes other stylistic choices that just seem unforgivable. The color and tone of everything is toned down and hazy, which is a poor choice when characters are singing entire songs about Red contrasting with Black. You'd think, maybe you might want to use that, but instead everything's just a filtered contrast-less void. You'd also think that in a song called "Stars," you would actually show the stars more than once or twice, but that would be work, and looking at Russel Crowe's upper body is easy.

There are hints of set design that are completely wasted. They build a bustling town square, and focus all of the action in a crowded tent. They take a tall, spiraling cathedral, and look at one section of a balcony. They build a barrier and a warzone and focus everyone right next to the wall. And on and on and on. The film absolutely refuses to explore the world it has created. On stage, they have to do that, because they have limited space. Part of the reason to even make it into a movie is to utilize the infinite opportunities for movement, and the film does none of that.

So, about Amanda Seyfried... everyone else is going out of their way to not sound like they're on the stage, and then she comes along, high-pitched and warbling like a hummingbird is in her larynx, and it's absolutely disconcerting. It sounds like what a child thinks an opera sounds like, and it makes her storyline, which is already pretty boring, completely intolerable. I don't blame Seyfried, however. It's not her fault she didn't have a director who was capable of saying "Hey, don't do that." Although, honestly, Taylor Swift would have probably figured it out.