This article is part of the TerrorBear series.

The North American TerrorBear (ursus formidonis) was until recently believed to be but another mythical wanderer in the realm of cryptozoology. During the spring of 2009, a team of UCLA biologists discovered a smoldering set of footprints in Washington state's Beacon Rock National Park. After sixteen hours of tracking, the students happened upon an actual TerrorBear in the process of eating. Over the next eight days, the group managed to observe the day-to-day life of a TerrorBear from a distance. On October 17th of 2009, park employees discovered notebooks, clothing, a pair of eyeglasses, audio tapes, half of a backpack, and other property belonging to the students, strewn out over a three-acre span near the center of the park. Below is a series of excerpts from their notes, accompanied by unproven yet widely believed mythos concerning this dangerous and elusive creature. 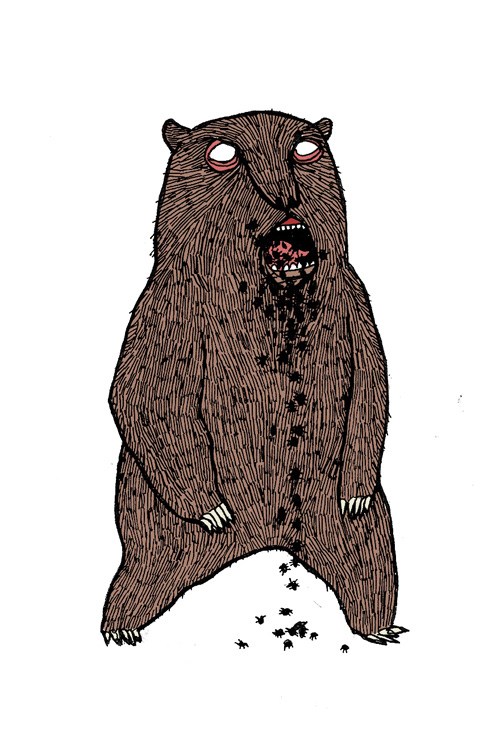 "Astonishing. Absolutely astonishing. We hiked for two days in search of a relatively common finch, only to discover an honest-to-god TerrorBear. Our exploits since yesterday's discovery have been intense. It's hard to focus on this creature, remain hidden, and take notes. The name of this beast is well deserved. I've had a dense sickness in the pit of my stomach since first laying eyes upon it. It has yet to notice us, but something tells me it knows we're here.

I've studied bears before, mostly ursus arctos horribilis, and nothing about this creature falls in line with what I've come to know of most bears. For starters, the TerrorBear is approximately thirteen feet in height. The frame, limbs and head are all proportionately accurate in comparison to a common black bear ... this thing is just vastly larger.

Yesterday the TerrorBear spun 180 degrees to literally rip a white-tailed deer in half before launching its carcass up into the treetops. It was at this moment that we got our first glimpse of this abomination's face. His* (we're assuming it's a male) eyes were solid white with no discernible pupils, iris, cornea, etc. Most of the features of the face were standard affair as far as structure goes.

One thing worth noting, and this is a pretty startling discovery: a steady stream of tiny black spiders appear to be constantly flowing from the mouth of the TerrorBear. I have no explanation for this phenomenon, but can say indefinitely that I will never sleep again having seen the things I've seen in the last 24 hours." 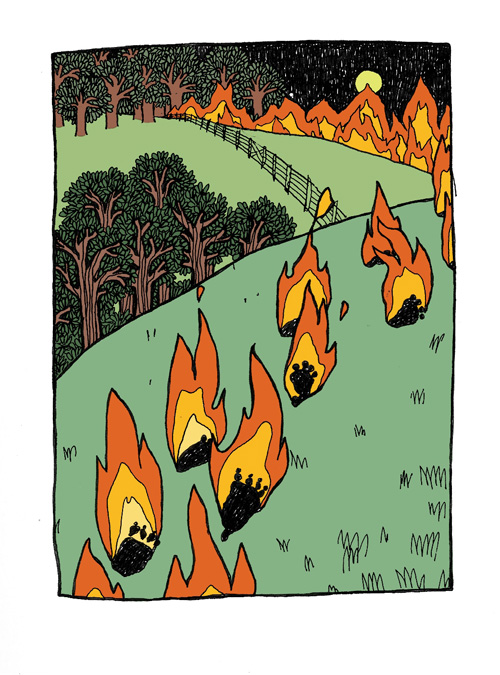 "Day Four-
It's hard to understand how this species has gone undiscovered for as long as it has. Everywhere it walks, it leaves twenty-inch-long flaming footprints. The fires within each impression don't seem to die. Upon reaching the crest of a particularly steep hill, we could see the path we had followed, for miles behind us, still ablaze in the night sky.

The entire lot of us has grown hungry, and we are beginning to dehydrate. The only opportunities we have had to rest, eat, or take notes have come at the moments when this heinous creature pauses to destroy something. **Be it possum, tree, owl, or rockface ... the TerrorBear seems to only concern itself with destruction. As unbelievable as it might sound, we saw the ravenous ursine destroy a waterfall. I don't know how to put into words what happened actually. There once was a waterfall, and now it is gone. The water just stopped pouring downwards.

And then there's the noise the TerrorBear makes. Please God stop the noise. It's not a growl. It's not a howl or groan. It's unlike anything I've ever heard emitted from the throat of any other animal on earth. Imagine the sound of one hundred men screaming as they drown in mud. Shrieks of horror, at various pitches, entrenched in a wet burbling noise. Now take that noise and slow it down drastically. That's about as close to a description as I can come up with. We've been listening to that same sound for four days now, without cease. I'm beginning to lose focus on my observations and note-taking. More to come. I need to conserve some energy for now."

** "TerrorBears exist to lay waste to this world. In that sense they are like black holes, destroying any and all things unfortunate enough to fall within their proximity. Also like black holes, you will never find two TerrorBears in each others' presence. The result of this phenomenon is exactly what one might expect when an unstoppable chaotic force encounters its equal - absolute annihilation of all present matter. The craters on this planet have a variety of sources: meteorites, uncommon erosion, explosions, and TerrorBear showdowns."

-Excerpt from "Beasts of the Armageddon"
Doctor of Theology, Keegan Whitledge
HawkMen Publishing, 1992

TerrorBears exist to lay waste to this world.