The P-T-B Archival Recap of a New Era

Thursday, Sep 02, 2004 by Cliff "Cliff Yablonski" Yablonski
Know of an awful site? Send it to us and become a hero!

The P-T-B Archival Recap of a New Era, submitted by AlienRadioStatic. Okay there are a lot of fucking words on this site and to tell you the truth, I only read about seven of them, six of which I've already forgotten. This computer screen page is something about some guy who's all pissed off at another computer screen page site and he's devoted his entire life to writing about how much he hates them and wants to post little nerd geek shit pictures regarding them. I don't know what this guy's problem is, besides the fact that he's got some mental disease which makes him a huge dumbass, but there's about 60,000 paragraphs of shit he wrote that you can read and use to analyze why he's such a raving fuckpot with too much damn spare time on his hands. 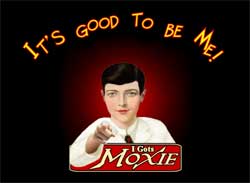 Wherein Popeye continues His Legacy. One of many legacies, actually. And a fine legacy it is, too. Something to BE proud of. Nothing to hide. Come one, come all. I am nothing if not an Open Book. Behold! Ecce Veritates! The Mikey WereLitzers, on the other hand, of The Mediocre Whores bored (TMW - disinfotainment.com), et al., have a "legacy" that is something to not BE proud of. And that is quite the UNderStatement, to tell the Truth. Their legacy is something to BE ashamed of. Something to hide, and hide away from. Something they now would like to "go away". Even if they have to perform REvisionist History to achieve that goal. Something they hope their co-workers, and acquaintances, and friends, and neighbors, and family doo not find out about. (few that they have) A worrisome, nagging, nasty, ugly, thing that eats away at their battered consciences, and questionable minds, and sickly bodies, and sorrowful souls. Like a puss-filled, putrid, festering, gangrenous, suppurating, weeping wound-sore that is BEcoming more and more visible (and smelly) as each day passes. Some people can see that extreme ugliness even now when they walk by them on the street, or in the mall. etc... You don't have to meet them, or talk to them, much less get to know them, BEfore you intuitively know that they are not someone you want to know. And are, in Fact, someone you should not get to know. Someone to stay away from, and not associate with, and shun and ignore. That is their legacy. For all the world to see.

Yeah, sure buddy, I'm glad you spend your time writing all this stupid shit nobody will ever read for your site nobody will ever visit. I bet you're just pleased as punch about spending all your free time obsessing over a bunch of people you'll never meet and explaining in painful detail just how much you want to bitch about them on your Intersite webscreen. Christ, it's bad enough when people have to write shit on the computer screen, but it's even worse when some loser dickslobs spend time writing shit about other people writing shit. How big of a limpwristed bitchtit loser does that make you?